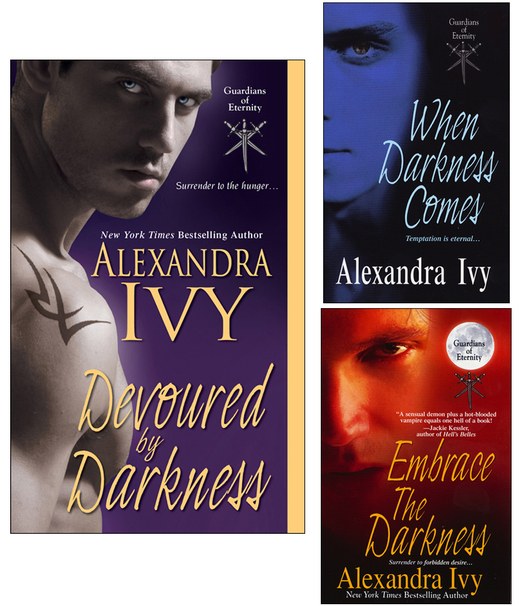 Devoured By Darkness They are the Guardians of Eternity, strong, skilled, seductive vampires chosen to protect--and to destroy. And they will risk anything to fulfill their duty, and satisfy their desires. . . Tane is a Charon, sworn to hunt and kill rogue vampires. His new assignment seems like a waste of his talents--until he catches up with the jinn he's been sent to capture. Half human, half demon, Laylah has a vulnerable streak that strikes right through to Tane's cold heart. He should be furious when she uses her powers to bind them together, preventing him from dragging her before the Commission. Instead he welcomes any reason to stay close enough to touch, to taste, to seduce. . . Laylah doesn't know why she was chosen to protect a child who may be the catalyst in a war between good and evil. But the mysteries of her past pale compared to the dangers approaching. Tane is devastatingly strong, breathtakingly sensual. And Laylah will have to trust in every ounce of that strength, because her enemies are drawing near, eager to destroy them both. . . When Darkness Comes Never Tempt Fate It's been a hell of a day for Abby Barlow. In just a few hours, she's survived an explosion, watched her employer die, had a startling dream, and now she finds herself in a seedy Chicago hotel with the sexy, unearthly Dante, a man she both desires and fears. For 341 years, Dante has stood as guardian to The Chalice, a mortal woman chosen to hold back the darkness. A terrible twist of fate has now made Abby that woman. Three hours ago, Dante would have used all his charms to seduce her. Now she is his to protect. And he will do so until his very death. A terrifying plan has been set in motion, one that will plunge Dante and Abby into an epic battle between good and evil--and a desperate race to save their love. . . Embrace the Darkness Is He Her Mortal Enemy Lady Shay is the last of her kind. Half human, half Shalott, her blood is a precious aphrodisiac to vampires, who consider it more precious than gold. Though Shalotts are renowned assassins, a curse held over Shay lands her on the slave auction block, where her fate is uncertain. . . Or The Man Who Will Risk All. . . Viper, the beguiling chief of a deadly vampire clan, can't explain his longing to possess the beautiful Shalott who once saved his life, but now he is free to do anything he wants with her. Strangely, while he desires both Shay's blood and body, he wants her to surrender willingly. To Save Her Life? A hidden evil has been stalking Shay since she left the slave market with Viper. It is an evil that endangers the very existence of Viper's kind, and there's no reason he should court such danger just to protect a Shalott. But the love he feels for Shay is enough to make him willing to go to hell and back if it means spending an eternity with her in his arms. . .