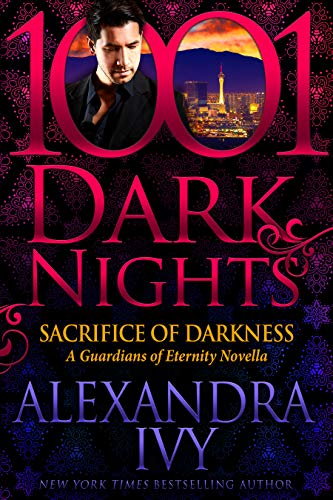 Sacrifice of Darkness: A Guardians of Eternity Novella

Javad has one rule. No fighting pits.

It doesn't matter that the savage battles have been a tradition among demons for eons. As the manager of the Viper's Nest in Vegas, his word is law. Period. Then he hears rumors that some fool has dared to create a fighting pit in the middle of the desert. He goes in search of the hidden location, only to realize too late it's a trap by his former master Vynom. The powerful vampire is determined to force Javad to fight once again. This time to the death.

Terra is a rare fey creature known as a Seraf. Long ago she'd been captured by Vynom and forced to heal the fighters he used in his pits. Javad had rescued her, and she'd given him a medallion. If he ever needed her, all he had to do was to speak her name and the magic would lead her to him. When she hears his call she doesn't hesitate to rush to his rescue. Even when it means returning to the dark violence that still haunts her dreams.

Can they escape the nightmare that nearly destroyed them in the past? And if they survive, are they willing to sacrifice the duties that have pulled them apart to battle for a future together?

**Every 1001 Dark Nights novella is a standalone story. For new readers, it's an introduction to an author's world. And for fans, it's a bonus book in the author's series. We hope you'll enjoy each one as much as we do.**