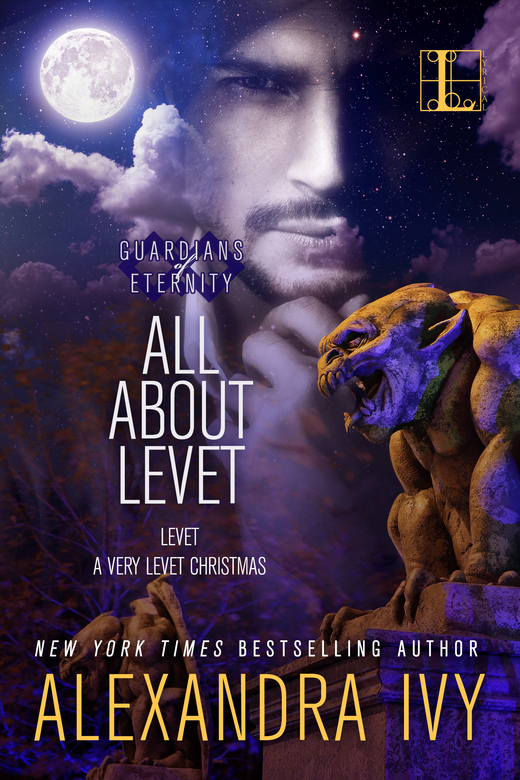 In these two delightful novellas, New York Times bestselling author Alexandra Ivy’s beloved Levet, the gargoyle with a heart of gold, takes center stage—with magical, comical, romantical results . . . LEVET Gargoyles do not admire difference—and Levet is undeniably different. Of miniscule stature, rather beastly looks, and with fragile, delicate wings, even his family has shunned him, banished him from his beloved Paris. That he is the only gargoyle ever to help defeat the Dark Lord and his hordes of minions makes no impression. But now Levet has come home, determined to be restored to the official Gargoyle Guild. To do so, he must confront the most feared gargoyle in all of Europe. The one who tried to kill him as a child: his own mother . . . With few allies, Levet’s survival may depend on the aid of two strangers: Valla, a beautiful but damaged nymph, and Elijah, the fiercely possessive, love-struck vampire clan chief to whom she can’t quite surrender—unless Levet has something to do with it . . . A VERY LEVET CHRISTMAS A gargoyle of Levet’s charm and intelligence should not be facing a solitary Christmas. True, he may appear a little unconventional—even for a gargoyle. But what Levet lacks in height he makes up for in loyalty, and being banned from the festivities surrounding the Queen of Weres’ new pups is quite unfair. So when a beautiful Christmas angel begs for help in fulfilling her duties, Levet is available. Armed with a magical wand, Levet confronts Damon, a pureblood Were intent on seizing the throne.  Challenging the King will put the pups at risk—and drive away Damon’s potential mate, Gia. Who better to convince Damon to choose love, not war, than a gargoyle expert in amour? . . .

Walking through the dark shadows beneath the Eiffel Tower, Levet avoided the human tourists who strolled along the sidewalk to admire the carnival atmosphere that spilled through the streets despite the late hour.

Something inside of him seemed to bloom as he savored the sights and sounds that he’d been denied for so long.

It was the city of his birth.

And the city where his greatest enemies resided.

Enemies who also happened to be his family.

His sense of homecoming vanished like a bubble being popped.

Being different wasn’t admired among the gargoyles. And, when it had been determined he was never going to grow beyond his miniscule three-foot stature and that his wings were going to remain as delicate as a dew fairy’s that shimmered in hues of blue and crimson and gold, he was tossed away like a piece of rubbish.

No. He scrunched his ugly gray face into a grimace, his long tail twitching at the unwelcomed memories.

He’d been more than tossed away. He’d been banished. Shunned by his own people.

With an effort, he squashed the painful recollections and reminded himself he was no longer that frightened enfant.

Just a few weeks ago he’d stood up to the baddest of the bad.

He, Levet the Gargoyle, hero of all ages, had defeated the Dark Lord and his hordes of minions.

Okay, there had perhaps been a few vampires and Weres who helped destroy the bastard. And Abby had been there, the current Goddess of Light. Oh, and a Sylvermyst or two. And curs . . .

But he’d been the one who had struck the killing blow.

Right before the Dark Lord had skewered him with a lightning bolt that had burned straight through his chest and into his heart. If it hadn’t been for Yannah’s swift action he would even now be nothing more than toast.

He heaved a rueful sigh, not quite as grateful as he should be.

For weeks she’d led him on a merry dance, appearing and then disappearing. Kissing him one minute and slugging him on the chin the next.

It had been . . . exasperating. But also thrilling.

What male did not love the danse de l’amour?

But after she’d rescued him from the cellar of the warehouse where he’d halted the looming apocalypse, she’d taken him to her cozy little home.

And a full-blood Jinn as a next-door neighbor.

Not the most comfortable place for a gargoyle who was never so happy as when he was soaring across a star-spangled sky.

And then there was Yannah.

The female made him natty.

Or was it nutty?

She had gone from a charming, elusive tease to a female who was determined to smother him with her fussing and fretting. Sacrebleu. His wounds had fully healed. Well, unless you counted the bit of charred skin in the center of his chest. It was annoying to be coddled like he was a helpless bébé.

At last he’d had enough.

He needed space to breathe.

And more than that, he had a few ghosts to lay to rest.

Halting just beyond the Eiffel Tower, Levet muttered a curse as he caught the scent of moldy granite. He’d known it wouldn’t take long for the whispers of his arrival to reach the ears of his brethren.

No one gossiped worse than a clutch of gargoyles.

Still, he’d hoped that he could at least reach his mother’s lair before being attacked.

Landing with enough force to send tiny quakes through the street, the two gargoyles (one male and the other female) spread a spell of illusion to hide them from the passing mortals.

Levet grimaced. The two were everything that Levet was not.

Towering over six feet with leathery wings that they tucked close to their massive bodies, they were creatures who would cause nightmares even among the demon world.

Their gray skin was the texture of an elephant hide and absorbed the moonlight. They had stunted horns that could smash through steel and long tusks that could pierce through armor. It was, however, their brutal features that truly reflected their savage natures.

“Well, well,” the female drawled, her gray eyes holding a cruel amusement that sent a chill down Levet’s spine. “If it isn’t my prodigal brother.”

At a glance it would be impossible to guess that the three gargoyles were related. Claudine was his elder sister while Ian was a first cousin.

Of course, it wasn’t just their appearances that were different, Levet consoled himself. His relatives were nasty-tempered monsters who terrorized lesser demons with spiteful glee.

Oh, and their sense of humor was nonexistent. Which meant that Levet couldn’t resist tweaking their ugly snouts.

Having come from the shallow end of the gene pool, the male demon furrowed his heavy brow in confusion.

“Non. You are mistaken. My name is Ian, not Fred.”

“He knows your name, imbecile,” Claudine hissed, slapping her companion on the back of the head. “As usual he believes himself to be amusing.” She turned back to glare at Levet. “What are you doing in Paris?”

“Shut up.” Claudine gave Ian another slap, her gaze never wavering from Levet. “You know you’re not allowed in the city. The Guild kicked you out and Mother shunned you.”

“Ah, dearest Maman, how is the loathsome old bat?” Levet drawled, folding his arms over his chest. If he was going to be squashed like a bug, he wasn’t going to give Claudine the satisfaction of seeing his fear. “Still eating children for breakfast?”

“She has actually been plagued with ennui since she had her latest lover put to death.” Claudine’s smile was a cold threat. “Perhaps watching her deformed son being used for target practice will bolster her spirits.”

Levet didn’t doubt it would. His mother had a peculiar love for violence.

“Or perhaps I could chop you into tiny pieces and spread you around the city, chère sœur. Then Maman could spend the next century trying to put you together again.”

“Such a large mouth for such a tiny creature,” Claudine growled, pointing a claw in his direction. “It’s time someone taught you a lesson in manners.”

“Ah.” Levet batted his eyes. “If only I had a euro for every time I heard that threat.”

The female gargoyle growled like a rabid Were. Not at all attractive for a gargoyle.

And she wondered why she couldn’t find a mate?

The male gargoyle stumbled to a halt.

“Ian, did you hear me?” Claudine snapped.

“Mon dieu. I am surrounded by morons,” Claudine muttered. “He can’t turn you into a newt, you fool, but I can cut off your head and have it mounted on Notre Dame.”

“No need to be rude,” Ian muttered.

“Oui, no need to be rude, Claudine,” Levet mocked.

“Ian, get him and cut out his tongue.”

Ian took another grudging step forward only to halt again when a flaming arrow flew directly between his horns.

“What was that?” the male gargoyle demanded, casting a swift glance down at his huge body as if he was afraid he’d been transformed into the mysterious newt.

Levet didn’t have a clue, but he was never slow to take advantage of a situation. It was the only way for a three-foot demon to survive in a world where “only the good died young.”

“You didn’t think I would come to Paris alone?” he warned. “I have dozens of allies waiting to rush to my rescue.”

“Grab him,” Claudine demanded, abruptly ducking as an arrow threatened to skewer her thick skull. “Merde.”

“You capture him.” Ian launched himself into the air. “I am going home.”

With a muttered curse, Claudine was swiftly following her cousin. Both were bullies, and like all bullies they had a large streak of cowardice.

“You won’t escape without punishment, Levet,” she shouted over her shoulder, her leathery wings barely visible against the night sky. “That much I swear.”

Flipping her off, Levet turned to scan the nearby bushes.

There was a rustle of leaves before a slender, golden-haired female stepped into view.

Sacrebleu. All nymphs were beautiful, but this one was drop-dead gorgeous.

Blessed with a silken curtain of golden hair she had wide blue eyes that were framed by thick, black lashes and set in a perfect oval of a face. Her lush, mouthwatering curves were delectably revealed by her skinny jeans and the scooped top that gave more than a hint of her full breasts.

“I’m Valla,” she said, holding the bow at her side, the remaining arrows strapped to her back.

“Ah.” Levet performed a deep bow. “I am deeply thankful for your timely diversion, ma belle.”

Her lips twisted as she turned her head to reveal the side of her face that had been hidden by shadows. Levet gave a soft hiss at the sight of her skin that had been savagely marred by thick, disfiguring scars.

The sort of scars that came from a deep burn. Or a magical spell.

“Not belle,” she corrected in flat tones. “As you can see I have become the beast, not the beauty.”

“Do not say that,” he protested, his tender heart squeezing in pity.

“Why not? It’s true enough.” Glancing toward the sky, she began walking toward the Parc du Champ de Mars. “Let’s get out of here before your friends. . .