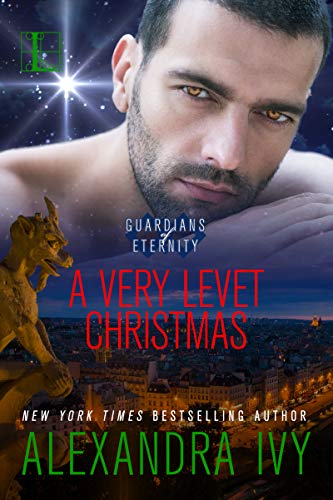 A gargoyle must save Christmas for the king and queen of the werewolves in this paranormal romance short story from the author of Hunt the Darkness.

A gargoyle of Levet's charm and intelligence should not be facing a solitary Christmas. True, he may appear a little unconventional—not to mention unconventionally little—even for a gargoyle. But what Levet lacks in height he makes up for in loyalty, and being banned from the festivities surrounding the Queen of Weres' new pups is quite unfair.

So when a beautiful Christmas angel begs for help in fulfilling her duties, Levet has nothing better to do than agree. Armed with a magical wand, Levet confronts Damon, a pureblood Were intent on seizing the throne. Challenging the King will put the pups at risk—and drive away Damon's potential mate, Gia. Who better to convince Damon to choose love, not war, than a gargoyle expert in amour? With a little magic, and a lot of Levet, this may yet be a truly wonderful Christmastime . . .

“Ivy always packs her books with buckets of action, emotion and sexy sizzle. Another winner!” —RT Book Reviews on Devoured by Darkness

“Ivy's fans will be invested in the development of romances introduced between supporting characters as well as further building of this conflicted universe.” —Publishers Weekly on Born in Blood

He loved the gaudy decorations. The caroling. The festive spirits of the humans.

Oh, and the mistletoe.

He didn’t know who had invented the tradition of kissing beneath sprigs of branches, but they had clearly understood how to celebrate a holiday.

And this year there was even more to love. How long had he waited for Harley to give birth to her babies? It seemed like an eternity. But at last they were here.

Five perfect babies. Three female and two male who were the first pure-blood Weres to be born in decades.

Which was why Levet had ignored the frigid weather and rushed from Chicago to St. Louis. Such a joyous occasion would no doubt include a grand celebration, with plenty of food and drink.

And of course, for the first time in more years than he wanted to admit, he would be spending the holidays with his friends.

A rare gift for a demon who’d been disowned by his family centuries ago.

Now he wondered why he’d bothered.

Standing on the bank of the frozen lake that edged Salvatore’s sprawling lair, Levet discovered his path blocked by a cur who was the size of a large mountain. Hess, the King of Weres’ right-hand mutt, wasn’t particularly bright, but he was impossible to get around. Especially if you happened to be a three-foot gargoyle with more brains than brawn.

Thoroughly annoyed, Levet folded his arms over his tiny chest, his large wings that shimmered in brilliant shades of blue and crimson with golden veins stretched out behind him.

“What do you mean I am not allowed to pass?” He tilted his head to make sure the moonlight captured the beauty of his stunted horns and handsome gargoyle features. He could only presume the thick-skulled hound didn’t recognize him. “Do you know who I am?”

“I don’t give a shit who you are.” Hess turned his head to spit on the newly fallen snow. “The king was very specific. Only family is given permission to enter the lair.”

Levet scowled. “But I am family.”

Hess narrowed his gaze, his breath sending out small puffs of icy fog. It was barely ten degrees, but the cur was wearing jeans and a too-tight muscle shirt.

“Oui. I am like a brother to Harley.” Levet pointed toward the large house on top of the hill, referring to the Queen of Weres and one of his dearest friends. “Go ask her.”

“Everyone knows that the Queen only has sisters,” Hess said. “No brothers.”

Levet rolled his eyes. Did Weres deliberately choose the stupidest humans to turn into curs?

“I said like a brother, you imbecile. Clearly we are not the same species.”

Hess gave a low growl, reaching down to grab Levet by the horns and yank him off the ground.

“Eek!” Levet dangled helplessly, his tail snapping furiously behind him. “Release me, you oversized Chihuahua.”

Hess leaned forward, his eyes glowing with a dangerous light. A cur didn’t have the same control over his wolf as a Were. The brute was on the edge of shifting.

Something Levet would prefer to avoid.

“Either you flap away with those fairy wings—”

“Or I rip them off and stuff them down your throat.” Hess ignored the interruption, his voice thickening and the air prickling with the heat of his wolf.

“Why must dogs always be so violent?” Levet muttered.

“Because we enjoy it,” the cur snarled. “Now get the hell out of here and don’t come back. You’re not welcome.”

With one mighty swing of his arm, Hess tossed Levet onto the ice where he slid like a hockey puck toward the far edge of the lake.

Smacking into the far bank, Levet tumbled end over end, at last coming to a halt near a large Dumpster. Furiously cursing, he tugged his horns out of the snow, turning to glare at the house on top of the hill. Since the house was built with large windows overlooking the lake, it was easy to see inside to the festively decorated home that was clearly filled with various demons enjoying Salvatore’s hospitality.

He should be among the guests, Levet silently groused, his gaze shifting to the dark shapes that patrolled the area around the house. Harley adored him. Every female adored him.

Besides, had he not just saved the world from Armageddon?

They should all be bowing down to him in humble gratitude.

With a twitch of his tail, Levet turned to stomp away from the well-guarded lair. There was no point in trying to slip past the guards. Salvatore was foul-tempered under the best of circumstances. With five new pups to protect, he would be beyond crazed. Levet wasn’t entirely certain that the wolf wouldn’t kill anyone he considered an intruder on sight.

“Uncouth animals,” he muttered. “They should be chained and muzzled.”

His outrage lingered as he left St. Louis behind, following the banks of the Mississippi River as he traveled north.

Once he was far away from prying eyes, however, his steps slowed and his wings began to droop.

In truth, they were a total bust.

The vampires were in a frantic search for Cyn, the clan chief of Ireland, who’d recently disappeared from the mysterious land of the fairies, along with Sally’s sister, Fallon. His own family had made it clear that he needn’t bother to travel to Paris to join in their celebrations, despite his having . . .