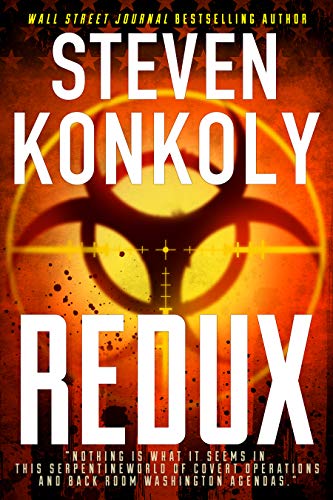 "Redux is a no-holds-barred, bare-knuckled brawl of a thriller that grabs you from the opening pages."

"Espionage, intrigue and heart-stopping covert operations like nothing you've ever read before!"

AN UNTHINKABLE THREAT EMERGES TO THREATEN THE WEST—AND ONLY ONE ORGANIZATION CAN STOP IT!

Two years after shocking Washington D.C. with a brutal twist, General Terrence Sanderson waits in the shadows for the right moment to demonstrate the grim necessity of his resurrected Black Flag program. His opportunity may arrive sooner than expected.

Obsessed with reviving a bio-weapons program long banned by the Russian government, Reznikov has found partners willing to fund the project--with unimaginable consequences.

Berg goes off the books, sending one of Sanderson's Black Flag teams to track down Reznikov. Led by Daniel Petrovich, the team races to stay one step ahead of a twisted conspiracy aimed at crippling the West.

In the end, nothing is what it seems in this gritty world of covert operatives and back room Washington agendas.