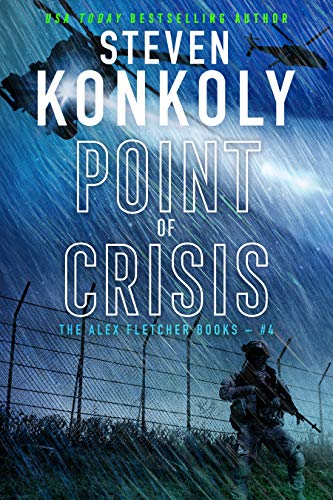 Point of Crisis: A Modern Thriller

"This is not your same old thriller. Not even close. Konkoly weaves techno-thriller detail and action into a ground level post-apocalyptic story...grabs you from the start and doesn't let go" Amazon reviewer

In the aftermath of the brutal attack on his family compound, Alex Fletcher embraces his rapidly expanding role within the New England Regional Recovery Zone (RRZ).>/b>

Fueled by a limitless drive to protect his family and a rekindled sense of duty, he enlists the reluctant aid of a local militia commander--to ease the public's fears of a federal government takeover.

As Captain Fletcher digs deeper into the government's plans, he starts to question the federal government's intentions--and ability to stabilize the situation in New England. With the region's critical infrastructure destroyed and the nation's electrical grid crippled,
he foresees a human cataclysm, with several hundred thousand desperate refugees marching further north through Maine.

The bad news doesn't end there.

Alex discovers that Eli Russell has rebuilt his militia--with the intention of hastening the Regional Recovery Zone's downfall. Obsessed with stopping the deranged psychopath that attacked his family, Alex scours the back roads and rural towns of southern Maine to find him--unaware that Eli's plans are far more personal.

With the world swiftly unraveling around him, Alex will face his most difficult decisions ever...

The Alex Fletcher Books (In Order):