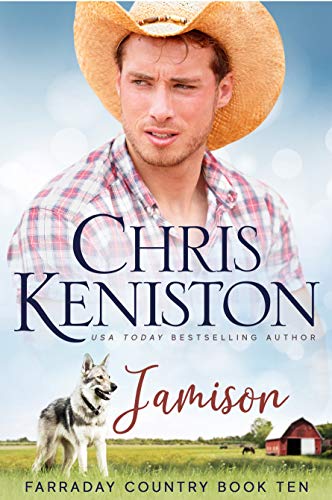 Tuckers Bluff isn't done playing matchmaker for the Farradays. Do you love the Farradays, the Ladies Afternoon Social Club, the mysterious dogs and their pups, Sisters, and so much more happening in Tuckers Bluff? Then you won't want to miss Jamison, the next matchmaking escapade, as he tumbles into love with everyone's friend and favorite café owner, Abbie.

Jamison, Book 10 in the fan-favorite Farraday Country series, is set in cattle-ranching west Texas with all the friends, family and fun that fans have come to expect from USA TODAY Bestselling author Chris Keniston.

Praise for the Farraday Series:

"My kind of read! Spend an afternoon with a great romance story, a feisty heroine, and one unforgettable hero." Lindsay McKenna, New York Times Bestselling Author on ADAM

"This warmhearted sweet read will draw readers in and keep them flipping to the last romantic page.” Nancy Naigle, USA TODAY Bestselling Author