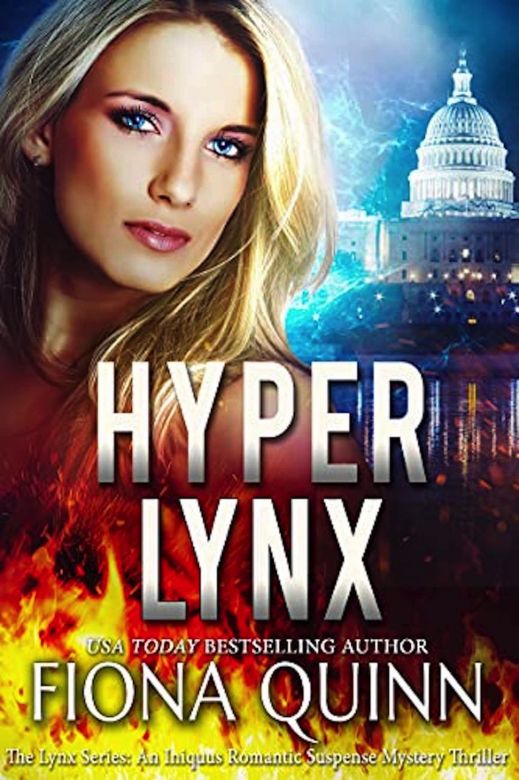 Lexi Sobado’s psychic information station is tuned to a new woo-woo channel. It seems to Lexi that both her deceased parents are trying to grab her attention. A warning of some impending danger appears to revolve around their deaths.Is the danger stemming from the awkward guy at CIA Headquarters who mistook Lexi for her mom?Maybe the threat comes from her FBI mission that Lexi is working undercover for her childhood mentor Spyder McGraw.Or maybe, it’s the upcoming wedding for her dear friends Gator Aid Rochambeau and Christen where the Assemblymen will gather.Lexi must navigate this newest labyrinth set out by the Hydra with her head on a swivel and her psychic warning system blaring.If she fails, her whole team could be destroyed.Grab your copy of HYPER LYNX, and let’s go!

It was such a relief when my phone’s buzz suddenly yanked me awake.

Mentally thrashing through an endless dream, I was too exhausted to stay asleep.

I had gone to bed last night braced for torment—whether it showed up as warm, loving pictures or angst-filled ones. Either would make my heart bleed.

In my life, which was overflowing with heroes, she stood out as the miracle maker. I missed her dearly.

All day yesterday, childhood memories had been popping up.

My brain had been feeding them to me like bon bons.

Closing my eyes, I savored each one.

The flavor on my tongue of Mom’s extra-special raspberry chocolate rum cake. The warmth of her voice as she whispered, “You’re my favorite,” into my ear. The earnestness in her eyes as she gave me good counsel or just stared out the window, thinking.

I remembered Mom as bright slashes of color on her pallet as she brought her imagination into a tangible form on a canvas.

Whenever I saw a bouquet of flowers, she was there in the richness of the hues and the delicacy of the petals, easily bruised and crushed.

She was still part of my every day.

The emptiness she left was only made more acute this last week as I probed around my memories like a tongue finding and fiddling with the space from a lost childhood tooth.

Only this ache didn’t come with the expected Tooth Fairy reward. Or knowing that another tooth would come in and replace the baby one that had fallen out.

Nothing could replace Mom.

There were just certain days that were more biting than others. Her birthday was always the hardest for me.

My life growing up had been enchanted. My parents had given me the Willy Wonka gold ticket of childhoods. Living a working-class lifestyle, my father seemingly owned a garage and acted as a mechanic. I believed that to be true until last year. That’s when I discovered that the garage was a cover story for his actual job as a CIA officer.

Though my family didn’t have a lot of material trappings, I never felt want. My parents filled my life with the colorful, the exciting, even the fantastical at times. And they brought into my unschooled education a parade of amazing people to mentor and teach me, despite Mom’s being sick for almost all of my life.

Mom’s imminent death had been part of my every day. And because I kept expecting her to die and then she didn’t, I convinced myself she’d always beat the odds. That she’d be able to stay in her bed where she’d always been, making a nest of pillows for me to join her. I’d cuddle up to listen to her read to me. Or I’d draw quietly while she slept…

Dad had positioned the parental king-sized bed in such a way that we could watch through the window as airplanes flew low in the sky on the way to one of the D.C. airports. We’d tell each other imagined stories of the great adventures that the passengers had just lived.

I still needed her.

I never really got a chance to mourn her passing. Not properly. Right after her death, my life had spun out of control. I became the focus of a serial killer who started a parade of criminals through my life.

They were now in my past.

And I was slowly recovering both physically and emotionally from the years of terror.

In my toolbox of valuable skills, I had my mother’s example of sheer dogged perseverance that had helped me through those terrible times.

Mom had heroically clung to life for as long as she could. As my last remaining relative, her big goal was to stay alive until I was a legal adult; she hoped to see my twenty-first birthday.

Valiantly, she made it until I was nineteen and a half.

Her transition to life beyond was peaceful, where her illness hadn’t been.

That day, I had carried a tray with her preferred breakfast—a pot of orange pekoe tea, toast with honey, and a banana—into her room.

The stillness as I pushed through the door stood like a sentry. It stopped me from entering.

Hovering in the hall, I looked through the crack and realized that the room was empty though Mom was in the bed.

She had traveled from this world to the next, joining Dad on the other side.

Mom must have known it was close; she went to bed that night with my pink baby blanket and had it clutched to her chest.

When I was very little and couldn’t sleep, Mom would wrap me in that soft pink blanket and carry me out to the tiny balcony off the living room in the Washington D.C. apartment where I lived my entire life until it burned to the ground.

I loved that apartment. It was the center of my own special universe.

Outside, with the white noise of the highway buzz, Mom would cuddle me into her as she soothed me.

I would block the smell of the city by burrowing my nose into Mom’s dress. The savory scent of garlic and onions, spices, and lemony dish detergent, would fill my nostrils.

All the strains and upsets of my little life fell away with the steady cadence of the old-fashioned wooden rocker’s creaks and thumps.

Mom hummed nonsensical notes instead of any recognizable melody. Her cheek rested against my head, so she could turn and plant kisses in my hair when she took a breath in to hum again.

When she did sing an infrequent song, it was usually something monotonous and straightforward like Row, Row, Row Your Boat.

The truth was that Mom’s talents were visual, and she had minimal capacity to find a beat or a melody.

It embarrassed her because dad and I both had good voices. Dad had been in a band all through college. He’d had to make a choice at some point to give that up to follow his career with the CIA.

Imagine sitting on a dorm room bed and thinking: Will I be a spy or a rock star?

My dad was a rock star to me, even if he made the choice to let his music become an avocation.

Mom liked to listen to us singing together, but I think she felt left out.

Before I went to sleep last night, my fiancé, Striker Rheas, had shown me a YouTube of a teenaged acapella group singing Queen.

There was one young teen who tickled my fancy. He held the tempo with his beatboxing, which he took very seriously.

As well he should.

He had carrot red hair, porcelain skin, and looked completely cherubic as his mouth made the sounds of cymbals crashing. I could just imagine him showing up at the audition, wanting to participate in the group, and being told his voice wasn’t up to standard. Undeterred, he found a way to join in.

Mom would have loved that.

And so, as I lay in bed with Striker beside me, not wanting to toss and turn and interrupt his sleep, I was thinking again about Mom.

In my imagination, I pretended to wrap myself in the pink blanket, sending myself down memory lane onto the balcony. And there, I imagined baby me lying in Mom’s arms as she monotoned, “Row, row, row your boat.”

And that was what I had done all night in my dreams.

It hadn’t been a pink, fluffy-blanket, sweet dreams kind of boat ride.

It was the nightmare kind.

The danger is imminent kind.

My mother had stood on the bank with her bare feet in the roiling waters, one hand clinging to a branch, the other cupped around her mouth screaming at me, “Row faster, Lexi! Faster! You have to get away! Go. Go. Go!”

And because I believed my mom, trusted my mom to always do the best she could to protect me and keep me safe even in a dangerous and turbulent world, I rowed.

And now, with a rubbery arm and physical exhaustion, I reached for my phone buzzing on my nightstand before it woke Striker, grateful—even if it was a wrong number—that by waking up, I had made it to shore and could stop.

I stroked my thumb across the screen and whispered, “Hello?”

“In a moment, you will get a call from the FBI. Take the call. Accept the invitation. Out.”