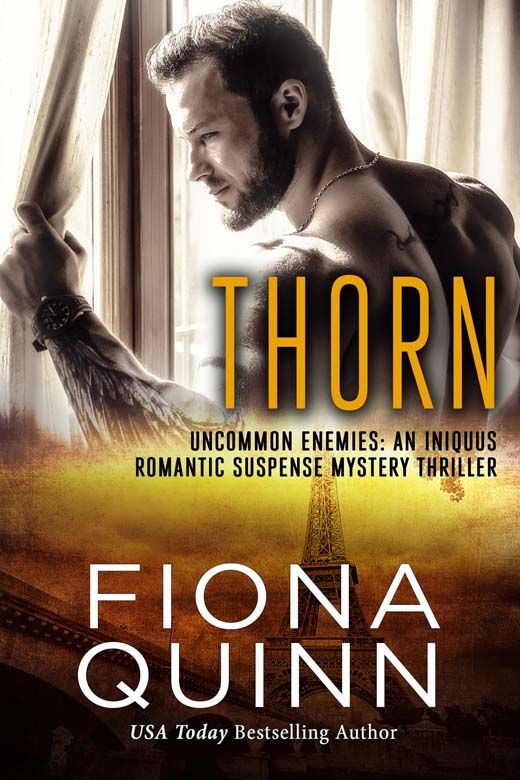 Juliette DuBois has no idea what happened before her traumatic brain injury. She doesn't understand why armed men just grabbed her off the streets of Toulouse, either. All she knows for sure is that she better figure out what's going on before her past gets her killed . . .

Retired Navy SEAL turned Iniquus operative Thorn Iverson knows that Juliette's kidnappers will stop at nothing to get what they want. But then again, neither will he. And what Thorn wants more than anything is Juliette. His gut (and heart) is telling him that she belongs with him—forever. He'll just have to keep her alive long enough to convince her of that . . .

With enemies closing in, can Thorn and Juliette overcome all that stands between them and their happily ever after? Or will their shot at love fade like a distant memory? 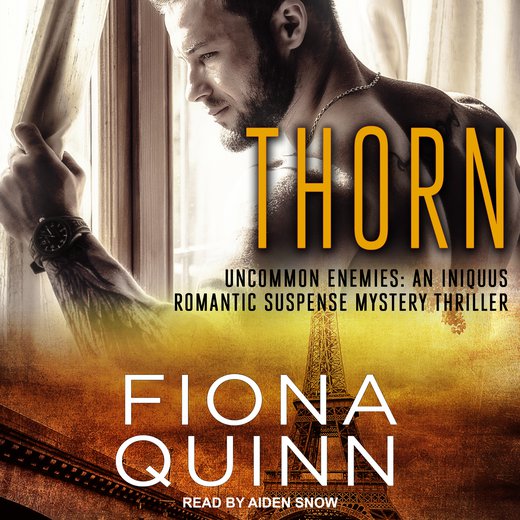 It was exactly like the pictures in her head, but she didn’t remember any of it.

Juliette stepped forward and laid her hand on the intricate carvings on the ancient wooden doors. They had been here since the late eighteenth century – wide enough and tall enough to admit a carriage into the cobble-stoned courtyard that was protected behind the barrier.

There was a cut out of a smaller door. If she had a key, Juliette could simply step over the threshold, walk in, and stand in the shadowed interior.

The bijoutier pressed his shoulder into the door frame of his tiny shop just to the right, watching the comings and goings of the pedestrians. Displays of gold necklaces and colorful earrings filled his plate glass window. To the left, there was a shop that sold leather gloves.

Her gaze travelled across the street to the corner where the bakery bustled with patrons. Juliette breathed in the yeasty warm scent of baking bread. Every morning, while her mother heated milk on the stove to make their bowls of hot chocolate, Juliette would run down the stairs, across the street, and buy baguettes fresh from the oven for their breakfast. She had a picture in her head of doing just that. Same awning. Same baskets of boule and fougasse, same glass displays of petit fours, and the jewel-toned, glossy fruit tarts.

Picture after picture flashed in her mind like turning pages in a photo album that belonged to someone else. Juliette didn’t have a single memory of actually being there in those pictures. Actually doing the running, and jumping, and climbing the stairs that she knew were just through this door on the right hand side – wide enough for two ladies in days-gone-by to brush their hoop skirts past each other, the carved stone railing protected them from slips and falls.

It was all so recognizable. And all so eerie.

The doors swung wide and a car drove out of the complex.

Juliette smiled and nodded at the man in his navy-blue Fiat as she slipped inside. She knew that the style of her clothes, the form fitting jeans and high-heeled boots, the quality of her cashmere turtleneck, the Hermes scarf wrapping her neck, would work for her. She didn’t look disreputable, there was no need for concern.

She took the stairs, nestled against the inner wall, that matched the picture in her head and walked up the three flights to stand on the landing with its stone mosaic of flowers. There were three identical doors, left, center, and right. The people who had lived in the center and left had not been friends of the DuBois family. When she was six, and she was supposed to be asleep, Juliette had become frightened and went to the neighbor’s for safety. Her mother had gotten in trouble with the police for leaving her child alone to go drink wine with a friend. The neighbors had been angry ever since. At least, that was the story her father told.

Turning toward the door on the right, Juliette tried to recall going in at noon for the lunch recess. Two hours of respite in the middle of the school day. An hour and a half subtracting the amount of time it took her to walk from school to home then reversing the pattern. One day, her father said, she had been groggy when she woke up. When she’d come home to meet the family for lunch, he had looked down at her feet and asked if the children had teased her that morning. “No, Papa, why would they tease me?” He’d pointed at her shoes, one was a sneaker and the other her patent leather dress shoe. He’d laughed when he told her that story. How did she walk all the way to school and home again without realizing that there was a difference in her gait or the thickness of the sole?

Someone opened the apartment door, her old apartment door. The sudden sound was such a shock to Juliette that she jumped and clutched at her chest.

“May I help you?” Juliette had to watch the woman’s lips in order to comprehend all of her words.

“I used to live here as a child.” Juliette smiled. “I was just taking a sentimental walk while I was in town.”

“Here?” the woman asked, turning to look into her apartment. “You lived here?” She turned back to Juliette with a shake of her head.

“Not recently.” Juliette thrust her fingers into the tight front pockets of her jeans. “When I was a child. A long time ago. Twenty years.”

The woman shook her head again. “Madame Gigot,” she called down the stairs. Her words echoed around Juliette and rang like a gong in her head. She tried not to flinch.

A woman hustled up the stairs. Her gray hair was brushed straight back and pulled into a short ponytail at the nape of her neck. She wore a faded-blue, formless dress, and black tennis shoes with bare legs.

“Madame Gigot, do you recognize this woman?” the lady asked, then reached behind her and pulled her door closed.

Madame Gigot came up beside Juliette, but Juliette didn’t recognize her. This woman’s picture wasn’t in her head at all. “I would have been a child,” she explained. “I lived here before the fire. My parents’ names are Marie and David DuBois.”

Madam Gigot canted her head. “What fire is this? David DuBois did live here, but he didn’t have a wife or child. He did have a boyfriend.”

“You know my father?” Juliette pulled a phone from the purse hanging from her shoulder and scrolled to his photograph. Surely, Madame Gigot was just confused. It had been a long time since the family had moved.

“I know David DuBois.” She took the phone from Juliette’s hand and squinted down. “Yes, that’s him. That’s DuBois. Scientist. He moved back to the United States, if I remember right.”

“Yes. That’s where he lives now,” Juliette said. Madame Gigot obviously remembered him. Why would she think her dad liked men? Why had she forgotten her mother, or their child? Yes, Juliette concluded, this woman was simply not remembering clearly.

“And we’ve never had a fire here, not in over two hundred years, that is.” Madame Gigot handed the phone back. “I’ve been the concierge here since I was a teenager. I would know if there had been a fire. No fire.” She waggled her finger back and forth.

Confusion pulled Juliette’s brows together. “But…But there are no pictures of my mother or my childhood because they burned. Here.” She gestured toward the apartment. “We lost everything. My mother saved me from the flames.” And Juliette had the scars to prove it.

The two women scowled at her.

“I lived here,” Juliette insisted. Her attention turned to the polished mahogany door. “You don’t need a key to get in. You just bump your hip into the door, and it pops open. When I came home from school, I was supposed to pretend to use a key, so no one would know.” I moved over toward the door and looked at the woman who had come from the apartment. “May I?”

She lifted her hand to give her permission.

The women started speaking back and forth in very quick French, and Juliette couldn’t follow along with their words mashing into each other like that. The range of their agitated voices was too high a pitch, and their mouths moved too fast from pursed lips for Juliette to read them.

Madame Gigot turned and shooed Juliette away. Literally took her two hands and shooed her away. Then Madame Gigot lowered her tone enough that Juliette caught the next sentence. “I don’t know what you’re up to, but you need to go now before I call the police.”

Juliette saw that the woman who had come out of the apartment stood with her hands on either side of the doorframe as if to bodily block Juliette from entering. Juliette hadn’t planned on going in, even if invited. She had no pictures of what the inside of the apartment had looked like. And it would be all different anyways, Juliette thought as she scuttled down the stairs. After the fire and all.

The concierge said there hadn’t been any fires...

The concierge should know such things. Would she lie? Maybe that hadn’t been disclosed when the new owner had bought the apartment.

What if there really hadn’t been a fire. What if her father had fabricated that story? Then, what happened to the photos, the souvenirs, the things one accumulated over time? A precious doll. A beloved book. A diary, maybe. Something that would spark a true memory for her?

Juliette felt robbed as she burst through the massive front door, back out on the street. She felt lost. She rubbed her fingers through her hair, feeling the scar that ran along the side of her scalp from the surgery that had saved her life, but had stolen her past.

All she had besides her physical scars was a series of flat images that she remembered like photographs from an album.

Juliette turned left, walking toward Place Capitole, begging her brain to remember something. Anything.