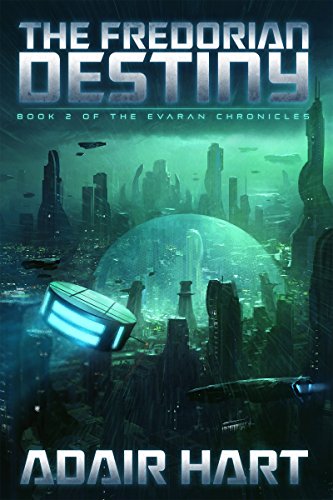 The Fredorian Destiny: Book 2 of the Evaran Chronicles

The timeline is wrong. This is discovered when Dr. Albert Snowden and his niece, Emily, travel with Evaran to a galactic cultural exhibition event on Kreagus, the capital home world of the Kreagan Star Empire and galactic superpower near Earth. The Fredorians should be presenting an ancient artifact, known as the Arkaron, to the Kreagan emperor. The problem is they aren't. Evaran has decided to step in and help the Fredorians achieve their destiny while stabilizing the timeline.

They must find the three lost Arkaron crystals in order to assemble the Arkaron. To make matters worse, Seeros, a powerful industrialist, has a bounty on their heads, causing bounty hunters to harass them each step of the way.

As if that weren't enough, an unknown faction is hiring freelance mercenaries to hunt them down as well. Evaran is joined by others, and together, they will have to navigate these perils to assemble the Arkaron and achieve the Fredorian destiny.