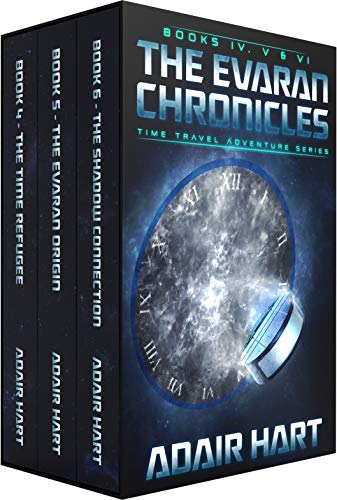 Not everything is what it appears to be.

Dr. Albert Snowden and his niece, Emily, continue their space-and-time-traveling adventures with Evaran and V. From the far reaches of Roeth, to a parallel universe, and then back to Earth, Evaran and crew try to maintain timeline integrity while dealing with the challenges that brings.
This box set contains the fourth, fifth, and sixth books in the Evaran Chronicles. If you like science fiction, time travel, technology, and adventure with a science fantasy bent, then this series is for you.

In the year 3104, United Planets Agent Jane Trellis finds new hope in cracking the illegal augment trade when time travelers Dr. Albert Snowden; his niece, Emily; V; and Evaran arrive at Roeth, a planet 740 light-years away from Earth.
With Jane's new allies, she can finally check out the Dyson bubble that is under quarantine. On a personal note, she hopes to discover more about how her husband died while working there.
Experiencing timeline changes, meeting multiple timeline versions of people, rooting out a timeline anomaly, and facing off against a timeline threat were not things Jane had envisioned herself ever doing, yet she finds herself in the middle of all those issues. Becoming a time refugee was definitely not on her list of things to do.

Thoughts can take on physical form.

Dr. Albert Snowden and his niece, Emily, never thought they would be able to travel through space and time. Or out of the timeline. Or out of the universe. Or even out of the plane that houses universes.
Yet that is where they find themselves while exploring the origin of Evaran, the mysterious being who rescued them from an alien abduction six months ago. Having to deal with the fact that they are part of a time loop that has not yet been fulfilled is one issue. Learning of another version of Evaran who needs their help in a parallel universe is an additional problem.
Hampering their efforts along the way are the Time Wardens, a hideously intelligent race from the timeline void, who relentlessly hunt any time traveler. Evaran and crew, along with new allies, will try to help the other Evaran while dealing with the Time Wardens and other threats.
The Shadow Connection--Book 6 of the Evaran Chronicles

Dr. Albert Snowden and his niece, Emily, are back on Earth after six months of traveling through space, time, and beyond with Evaran, the mysterious stranger who rescued them from an alien abduction. They were expecting to get some peace and quiet after the hectic nature of some of their previous adventures. However, things get complicated when Evaran's ship, the Torvatta, is stolen.
To make matters worse, Dr. Snowden has to deal with the near-death experience from a recent event. He and Emily must also adjust to the new side effects of their nanobots, which were enhanced prior to going back to Earth. As they look for the Torvatta, they must also deal with a rogue faction of the Helians, the group that represents Earth from a galactic perspective.

Evaran will call upon old and new friends within the nonhuman world to deal with the defected Helian sect. What they find drags Evaran and his new allies deeper into a global event that has timeline implications.