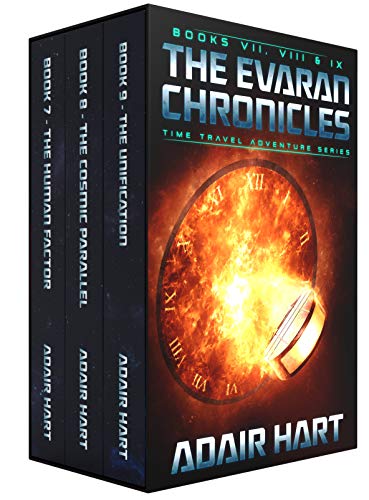 Threats can come from anywhere.

Dr. Albert Snowden and his niece, Emily, continue their space-and-time-traveling adventures with Evaran and V. They'll deal with an alternate timeline threat, an extrauniversal one, and a subverse entity while trying to maintain timeline integrity. Along the way they'll meet new allies, some who will become intertwined in Dr. Snowden and Emily's life.

This box set contains the seventh, eighth, and ninth books in The Evaran Chronicles. If you like science fiction, time travel, technology, and adventure with a science fantasy bent, then this series is for you.

Evaran and his time-traveling companions head to the year AD 10105 and over eighty thousand light-years from Earth, where they discover that humans are not where they are supposed to be. Humanity is also not what Evaran knows it should be, from a timeline perspective.

Humankind has splintered into multiple factions. To make matters worse, one of the factions is led by Salazar, an artificial intelligence dedicated to protecting its version of humanity . . . at all costs.

Adding to the confusion is the presence of others who should not be where they are. Evaran and crew will meet old friends and new allies while trying to determine what happened and how to fix it.

Not all prey is the same.

Dr. Albert Snowden just wanted to see a parallel timeline where Neanderthals were the dominant species on Earth. What he did not expect was a barren world. While investigating what happened, he, Evaran, Emily Snowden, and V are pulled into a trap created by a mysterious group.

One issue is that the trap forces the group to jump to parallel Earths. Another problem is that the Torvatta, Evaran's ship, is out of the picture. It does not help that the cosmic-energy-enhanced nanobots in Dr. Snowden and Emily are not working as intended.

To make matters worse, each jump to a new parallel Earth weakens them. Along the way, they meet Jelton Stallryn, a Rift Guardian, who has also fallen into the trap. Together, they will fight to escape and then track down the mysterious group responsible.

Evaran and the gang receive a summons to AD 514,723, approximately two hundred years before Earth is repopulated and becomes the seat of a galaxy-spanning empire. The problem is that the process has not been started on Earth.

To make matters worse, a threat from beyond this reality has been attacking the galaxy. Evaran and crew meet the Orions, an advanced civilization that has also been a victim of this new threat.

Evaran and crew are joined by Dr. James Bryson and Kess, an Orion. Together, they will need to deal with this threat and kick-start the unification of humanity with Earth as the center.