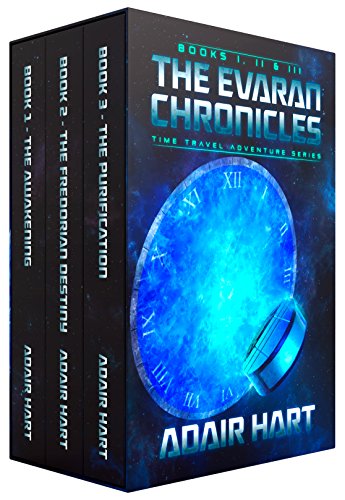 Reality is sometimes not what it appears to be.

Dr. Albert Snowden just wanted to be there for his niece, Emily, after the loss of her father. Being abducted by aliens, and then rescued by a mysterious being known as Evaran, has made that difficult. Despite their situation, they try to make the best of it while traveling through space, time, and beyond with Evaran and V, Evaran's trusty mobile artificial intelligence. With the use of Evaran's time-traveling ship, the Torvatta, they will try to maintain timeline integrity while dealing with the challenges that brings.

This box set contains the first three books in the Evaran Chronicles. If you like science fiction, time travel, technology, and adventure, then this series is for you.

What happens when a space and time traveler interferes with an alien abduction?

Dr. Albert Snowden just wanted to take care of his niece, Emily. The last thing he expected was to end up in a virtual simulation on a damaged alien ship in another galaxy one year into the future. Unfortunately, the ship's power is failing, releasing apex predators that were captured by the aliens.

Enter Evaran, a space and time traveler, and V, his trusty mobile artificial intelligence, who help those in need. They decide to interfere and help Dr. Snowden and Emily, along with two other humans who were also abducted.

In addition to all that, Jerzan Graduul, leader of the Bloodbore mercenary pack, has boarded the ship in search of potential salvaging opportunities. Evaran and friends will try to reach Evaran's ship while dealing with the Bloodbores and apex predators.

The timeline is wrong. This is discovered when Dr. Albert Snowden and his niece, Emily, travel with Evaran to a galactic cultural exhibition event on Kreagus, the capital home world of the Kreagan Star Empire and galactic superpower near Earth. The Fredorians should be presenting an ancient artifact, known as the Arkaron, to the Kreagan emperor. The problem is they aren't. Evaran has decided to step in and help the Fredorians achieve their destiny while stabilizing the timeline.

They must find the three lost Arkaron crystals in order to assemble the Arkaron. To make matters worse, Seeros, a powerful industrialist, has put a price on their heads, causing bounty hunters to harass them each step of the way.

As if that weren't enough, an unknown faction is hiring freelance mercenaries to hunt them down as well. Evaran is joined by others, and together, they will have to navigate these perils to assemble the Arkaron and achieve the Fredorian destiny.

The past has changed, and the timeline has been updated.

Dr. Albert Snowden and his niece, Emily, experience this while traveling on Evaran's temporally shielded space-and-time-traveling ship. What they discover is that humanity has taken a different path, one that has made Evaran decide to interfere and change human history.

Discovering what caused the change is one issue. Dealing with the nonhuman factions in Earth's past is another.

To make things worse, Dr. Snowden has to deal with a personal issue. It does not help that Emily is on a prison planet where she must survive, alone.