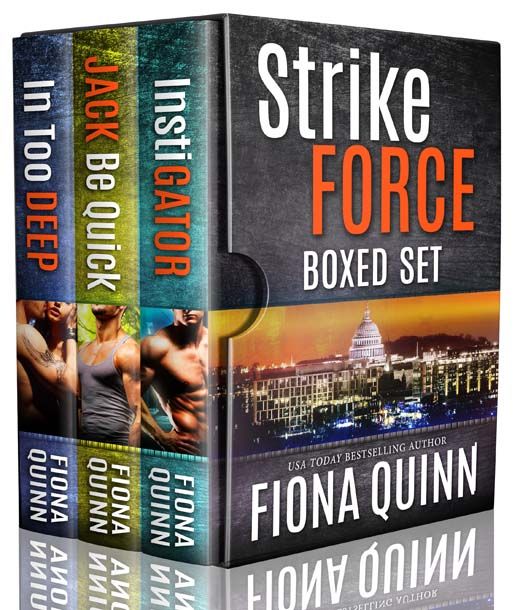 >>>Sometimes Trust Can Get You Killed

Deep watched the newscaster play the video of Lacey fighting off the FBI agent and escaping from a murder scene the night before. Now, she's turning herself over to the police. What Deep’s practiced eye saw in the video was a highly-choreographed crime. But somehow Lacey had thwarted the professionals’ plans.

˃˃˃ She Is In Imminent Danger

Enmeshed in a mystery that includes the FBI, the CIA, and a tangle of interconnected international crimes, Deep and Lacey work to discover who plays the good guy and who plays the bad guy in a gray world where right and wrong easily overlap.

Lives depend on them.

>>>The Prayer On Her Lips Is Jack Be Quick

It’s been months since ex-Navy SEAL Jack McCullen last saw his fiancée, Suz Molloy. He was on the other side of the world involved in a grueling black ops mission for Iniquus Corporation at the behest of the US government. Mission fail meant a special flight home, and an ambulance ride to the hospital where Suz should have been waiting for him.

˃˃˃ Something Is Very Wrong, And Lynx Might Be His Only Hope

When Jack rouses from his surgery to find Suz missing, he knows something is very wrong. Led by the psychic “knowings” of his Iniquus colleague, Lynx, Jack risks everything as he desperately tries to reach Suz in time to thwart the terrorists’ plot and save her.

This time, his mission is for more than love of country; it’s for the love of his life - his heart and soul.

A hardened war hero, Gator Aid Rochambeau is on a collision course with fate. Retired as a Marine Raider, Gator is now an Iniquus elite operative. He's been assigned to the Davidson mission. As the job gets underway, he is unprepared for the psychic confusion that swirls through his system. New to his psychic experiences, he reaches out to fellow Strike Force member, Lynx, for information, only to discover she too is battling a strange vortex of information. The one thing they both understand is that lives are on the line.

˃˃˃ Her Day Was Already A Mess, And It Is About To Get A Whole Lot Worse

Special ops pilot Christen Davidson receives her mission orders. Her day just went from horrifying to something far worse. Fellow operatives are in danger. Christen is desperate to fly a rescue mission. Instead, she’s ordered to act as an asset in a high-stakes, international game. She didn’t join the military to play dress-up, but she can’t disobey, even though this assignment is far outside of her comfort zone.

˃˃˃ Men Who Will Kill To Secure Their Billion Dollar Deal

For this mission, there is no place to run and nowhere to hide from the men who have their eye on a billion-dollar deal, and the only ones standing in their way is this improbable team. The gamble they’re making could mean life or death, but the reward could be so much more!

INSTIGATOR, a military romantic thriller with a psychic twist

Scroll Up And Grab Your Copy Today!