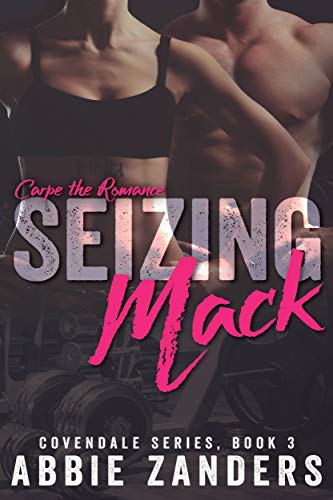 The Marines gave Heather “Mack” McKenzie a lot of things. Self-discipline. An arsenal of swear words. And the carpe diem attitude to make her fitness center, Seize, a success.

The hot new vice cop in town makes her breath catch. But with her model-thin stepsister swanning around Seize, what's the point? Covendale men want to date delicate beauties, not women with the muscle to knock them flat.

After ten years running from a tragic past, Detective Nick Benning is determined to put the past behind him and replant his roots in Covendale. When he walks into Seize to sign up, his gaze is instantly drawn to Mack's satiny skin, glossy chestnut hair, and taught, powerful body. He quickly figures out that inside her tough, snarky exterior beats a big, tender heart.

When Nick asks her out, Mack hesitantly accepts, cautiously hopeful this could be the real deal. But between Nick's dangerous job, Mack's insecurities, and her stepsister's jealous schemes, is their spark of connection lightning in a bottle...or doomed to fizzle?

“Excuse me.” The woman at the semi-circular front desk didn’t appear to have heard him. Turned slightly away from him as she was, Detective Nick Benning couldn’t quite make out her facial features. It took him a minute to realize she was on the phone. Nick waited patiently, taking the opportunity to check out the place out.

According to the chief's wife, many of the men and women who made up the local law enforcement were members of the fitness center and spoke very highly of it. Seize also had an active teen and pre-teen program that could prove mutually beneficial. If he established a rapport and built trust with the kids here as well as through district programs, the probability of making a difference rose dramatically.

First inspection complete, he turned his attention back to the woman behind the desk. Nick used his finely-honed skills of observation to silently appreciate the sun-kissed, satiny skin stretched tight over well-toned arms. Dark chestnut hair pulled up in a ponytail revealed a tiny, heart-shaped white birthmark behind her left ear. Petite as she was, there was nothing delicate about her. She radiated strength and energy.

And at that moment, irritation.

“No, Jay,” she said on an exhale. “Tonight, can you believe it?... Yeah… You sure you’re okay with this?… You are a saint… No, three hundred thread count is more than enough… Yeah, I know… Bye, gorgeous.” She put down the phone and Nick could have sworn she growled.

Her call completed, Nick cleared his throat and repeated the phrase a second time before she turned his way. For a moment, he felt as if a pair of lasers were directed right at his heart. Pale gray-green eyes locked on him, doing a complete assessment in the matter of a second or two. Then she blinked and that feral expression smoothed into a pleasant, professional mask.

For a moment, his mind went blank. Dressed in skin-tight black yoga pants and black sports tank, she was even more attractive standing up. Thankfully, his brain kicked back into gear before she pegged him as a slack-jawed idiot.

“I hope so. I’m looking for a place to work out. Seize came highly recommended.”

“Of course,” she said, relaxing enough to offer him an easy smile. She waved him into the small, functional office to the right. “Come on in. My name’s Mack.”

“Mack?” She didn’t look like a Mack. “Mack” conjured visions of big, beefy, tattooed truck drivers or dock workers. This creature before him was one hundred percent concentrated female.

“Short for MacKenzie,” she explained.

“Nick Benning,” he said, accepting her hand. It was so much smaller than his, but strong and warm. And he’d been right about her being tiny; standing, she barely reached his chin.

She stepped back and looked him up and down, her gaze professionally assessing. “Cop?” she asked.

She shrugged, a graceful lift of her shoulders. “We have lots of local boys here. Is that how you heard about Seize?”

It had been a long time since anyone had called him a boy, but he didn’t take offense. She wasn’t any older than he was and her tone held admiration, not disrespect.

Her lips curled into a genuine smile. “Gail is one of my biggest promoters. I’m going to have to start paying her referral fees. So, you’re new in town?”

“I just transferred from Chicago.” He resisted the temptation to explain that he’d been born and raised in Covendale. He wasn’t, by nature, a sharer, and years on the force had cemented the wisdom of not providing more information than necessary. He waited for her to pump him for more details, but she didn’t.

Instead, she simply nodded. “We offer two-week trials, free of charge. Unlimited use of the facilities. We’re open from five a.m. till midnight, seven days a week.”

“Many of our members work crazy shifts and don’t get weekends off,” she shrugged, as if every business was as accommodating. “We have a couple of weight rooms — free weights, Stride, Nautilus — plus a full cardio deck. Heated Olympic in-ground pool. Massage rooms, saunas, steam rooms. Group classes in everything from meditation to MMA.”

“It is,” she nodded without any trace of arrogance. A couple of teens ran past the office and waved, shouting out ‘heys’ to her, which she returned with a genuine smile and a wave of her own. “We also have a day care and a teen center, as well as several programs aimed at providing positive options, if you have kids.” Her eyes drifted down to his left hand.

“I don’t,” he said simply. Was she fishing? Or just providing information? Her pretty eyes gave nothing away. He liked that. Being a detective, he’d become adept at reading people. But her, she was making him work for it. “I’m not married.”

Her eyes flashed for just a moment—interest, maybe?—before she continued. “We have a small onsite canteen, too, stocked with healthy, organic snacks and smoothies if you need to refuel.”

The corner of her mouth twitched. “You’ll have to hit Lou’s. But that’s okay. We get a lot of new members that way.”

She turned away and leaned over the desk, offering him an unobstructed view of her toned, nicely curved ass. Nick caught himself staring, then shoved his hands into his pockets and focused his attention on the leafy green plant/tree in the corner. What was wrong with him? First, he’s sharing personal info, then he’s ogling her like they’re in high school or something. It was little unsettling. And kind of arousing. How long had it been since he’d had such an instant, positive reaction to anyone?

Slow your roll, Benning, he told himself. Just because you’ve decided to wander beyond your own self-imposed fence doesn’t mean you have to go pissing on every bush you see.

“Here’s a temporary key card and a brochure that explains everything. We’ve got an app you can download, too,” she said, straightening and turning back around to face him. She was looking at him expectantly, and he realized she was holding something out to him. Nick took it, his fingers brushing hers lightly in the process. She didn’t seem to notice, using her free hand to summon someone behind him. He frowned, irrationally annoyed with whoever was taking her attention away from him.

“The key card is good for the two-week trial,” she continued. “If you decide to join, we’ll issue you a permanent photo id and take your money.” She flashed him a grin that sent tiny sparks firing simultaneously in his chest and his groin.

“This is Carl,” she said, nodding to someone behind him. The new arrival entered the office and positioned himself next to Mack. Carl turned out to be a lean, muscular guy sporting a polo with the gym’s logo. In an instant, the strange fog clouding his rational thought processes cleared and Nick felt more like himself again.