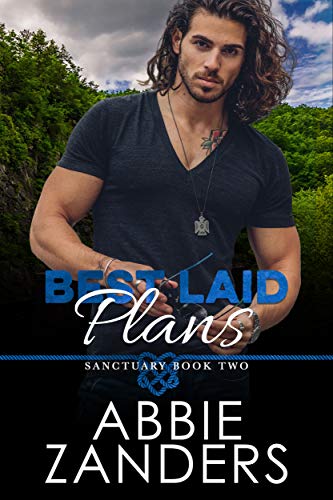 When best laid plans go awry, it might be time to make a new plan.

Former SEAL Hugh “Heff” Bradley has put aside his womanizing ways to focus on making the Sanctuary a place for veterans in need. He knows how difficult the transition back to civilian life can be; he's walked the razor's edge himself a few times.

His plan: Use his special skills to make the project a reality and stop those trying to sabotage it. That means keeping his head down and his hands to himself. Then he meets her.

Sandy Summers knows exactly what she wants: to get out of Sumneyville for good. Fate seems to be conspiring against her, however, throwing up one obstacle after another. Her plan: Work two jobs, attend night school to earn a degree, accept a job offer in the city, and never look back.

Impulsively hooking-up with the sexy, skilled SEAL before she leaves wasn't part of the plan. Neither was her absentee father showing up on her doorstep after fifteen years with another game changer. But she's worked too hard and too long not to stick to her plan, even if it means walking away from the only good thing that's happened to her in years.

Heff and Sandy know firsthand what can happen to the best laid plans. But when getting back on track means sacrificing a chance at true happiness, do they take it? Or do they make a new plan?

Best Laid Plans is a contemporary love story with enough steam, suspense, and humor to give you all the feels and leave you smiling.

Sandy cringed as the words came out of her mouth. They sounded so lame. What were women supposed to say in a situation like this? She wasn’t well-versed in one-night stand etiquette. But she had just had the best sex of her life, she felt compelled to say something.

Propped up on one elbow and looking sexier than any man should, his dark green eyes glistened as he watched her. Long, glossy black hair draped over his cheek and neck, as dark as the intricate tats that adorned his tan, muscled arms and torso. His lips quirked up in a roguish half smile, all the more devastating now that she knew exactly the kind of pleasure those lips were capable of.

His voice, like everything else about him, screamed dark and delicious. The personification of sin, that’s what he was. Sin and pleasure and a wellspring of guaranteed orgasms. In the last three hours, he’d given her four. His fingers were as skilled as his tongue, and the way he moved those hips…

Heat rushed into her face while simultaneously blossoming in the still tingling region between her thighs. His grin widened, as if he knew exactly what she was thinking. Maybe he did. Or maybe he was just really, really good at reading body language. He had known exactly where to touch, when to lick, and how to bite to take her right to the edge over and over…

Stop it, she silently commanded, pushing the words down toward her rebellious regions, the ones clamoring for just one more. You’ve had more than enough.

She jabbed one leg into her jeans, a physical manifestation of her frustration as the haze of post-orgasmic bliss began to dissipate. He continued to watch her, still and predatory, and for the moment, satisfied. Although, given his remarkable endurance and recovery time, that wouldn’t last long. She needed to leave before he coaxed her back into that bed and reminded her why she’d thrown caution to the wind in the first place.

Not an easy thing to do when he was looking at her like that.

She spied her panties on the chair in the corner where they must have landed after he’d tossed them over his shoulder. An image of him grinning in smug triumph as he’d removed them slowly and with such deliberate intent, his eyes burning with lust, had her nipples hardening again. Apparently he wasn’t the only one with a quick recovery time.

She snatched them up with a huff and crammed them unceremoniously into her pocket before her traitorous body won the stay versus go tug of war with her mind. She didn’t need to be putting on damp panties. The trip back to her place was short enough to go commando.

He made no move to stop her, which was her saving grace. He just lay there, the sheet draped over the bottom half of his happy trail, watching her with the lazy interest of a man who had gotten off a few times, too. No false platitudes or disingenuous sentiments. They both knew what this was—namely, nothing—and they were completely, totally, absolutely one hundred percent on the same page about that.

She pulled the shirt over her head, grabbed her purse, and turned to look back at him one last time. She sensed, more than saw, a wariness lurking beneath that smoldering stare. As if he was expecting her to suggest something more. Like, maybe grabbing a drink sometime, or a request for a repeat.

She wouldn’t. In less than a week, she’d be starting her new life, and he’d be nothing but a lovely memory tucked away in her personal, private spank bank.

His eyes flickered, widening slightly in either surprise or disappointment, she wasn’t sure which.