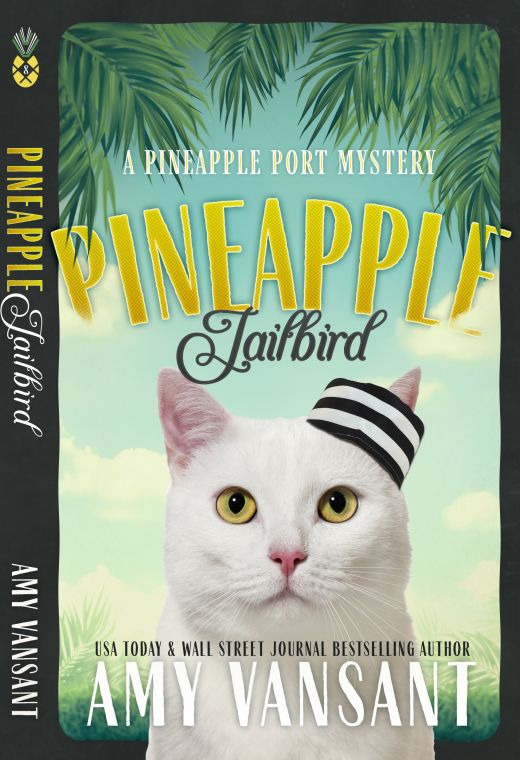 To save her loved ones, Charlotte must find a way to clear her boyfriend's crazy ex of a killing. It may be the only crime the woman didn't commit...but things don't get any easier when someone mistakes Charlotte as a traitor and sends a madman with a distinctive "tattoo" and unusual gang of deadly pets to stop her.Fans of comedic mysteries like The Thin Man, Moonlighting, Monk and Elementary will fall in love with the charming, funny and thrilling world of Pineapple Port!

Christmas lights blinked on almost every lamppost of Charlotte’s street, their cheery twinkling curving into the distance like an airport runway constructed by someone deep into the spiked eggnog. Yawning and stretching for the stars, Charlotte strolled to the base of her driveway to grab the morning paper. Her movement triggered a neighbor’s motion-activated Santa into a series of muffled ho-ho-hos. Santa’s voice had been failing him as the season waned.

Christmas had been over for a week, but people loved the holidays in Pineapple Port, the fifty-five-plus neighborhood where Charlotte had grown up. The residents dragged out the season until every plastic reindeer on every roof begged to be stuffed back into the garage. Many of the locals still had family visiting—sons and daughters and grandkids who didn’t want to go back to the freezing Northeast. Or freezing Midwest. Or, heaven forbid, Canada.

It made Charlotte shiver just thinking about those places. She had Florida blood. A temperature dip into the fifties was enough to send her scurrying for a snowsuit and gloves. She was a newly minted, fully licensed private investigator, but how people survived winter north of Florida was a mystery she didn’t think she’d ever solve.

Luckily, the thermometers hovered at sixty-seven this December morning—

Hold on. That’s not right.

As her fingers grazed the top of her bagged newspaper, the house across the street caught her attention. Mariska lived there with her husband, Bob. Mariska had raised Charlotte after her grandmother died, leaving Charlotte the only permanent resident of Pineapple Port under the age of fifty-five. She’d already been orphaned before moving in with her grandmother, and if Mariska and the other residents hadn’t worked the system for her, she would have been thrown into the custody of the state.

Thanks to Mariska, instead of being shuffled from one foster home to another, Charlotte had spent her days wheeling around the neighborhood in a golf cart and shuffling through water aerobics until her fingertips puckered.

Charlotte knew all Mariska’s tics and habits and this morning, something wasn’t right. She knew what the house across the street was supposed to look like at five a.m. because her dog, Abby, who used to fetch the paper, had developed the playful habit of tearing the news to shreds before dragging the remnants back to the door, newspaper streaming behind her like she was a furry parade float.

Charlotte didn’t want to fire Abby from her only job, but piecing the paper together so she could read it wasn’t easy before her coffee.

The new morning ritual involved Charlotte tootling down the driveway to grab her paper while Abby wandered off to do her business. During this time, Mariska’s lights were always on.

Today, Mariska’s lights were off.

Mariska and Bob took turns waking up too early—he had to go to the bathroom, her legs ached—there was always something.

But the lights weren’t on today.

This morning, Mariska didn’t wave at her through the window, holding up her dog, Izzy, and working the mutt’s paw so it looked as if the pointy-eared shedding machine was waving as well. That wasn’t too strange—Mariska hadn’t held up Miss Izzy in a while. The dog had grown into a sturdy brick of hair and weighed about as much as a small pickup truck thanks to Mariska’s inability to stop treating her.

But it wasn’t just the lack of lights and waving dog paws bothering Charlotte.

She took a step to the left, still peering at Mariska’s door.

Mariska’s door was ajar. She hadn’t registered the shadow at first but now she could see the front door of Mariska’s double-wide pre-fab home appeared to be hanging at an angle. A trick of the light. The door was simply open.

Charlotte straightened, paper hanging in her hand, until Abby flew by, snatching it from her grasp. The Soft-coated Wheaten gave her prize a good shaking and tore at the plastic sleeve until the paper unfurled like a flag across the driveway. Abby immediately lost interest, spat out the plastic, and returned to sniffing around the yard.

Charlotte sighed and stared at Mariska’s daily news, still lying at the end of her driveway. If she or Bob had come outside to fetch it, and left the door open, they hadn’t finished the job.

Izzy didn’t fetch papers. Mariska’s dog preferred to stay inside and protect the family from animals on the television set, barking and rushing to slam her nose into the screen whenever a critter appeared in a commercial. She particularly hated a cartoon eagle that mocked her from the screen as she yapped and tried to circle behind the television to find it.

Maybe they went around the back...

She wandered a few feet down the street to peer around the side of Mariska’s house.

Well, there it is.

At least one of them went somewhere on the golf cart. Mystery solved.

Charlotte looked at her watch as she turned back toward her house, only to make a full three-sixty and head straight for Mariska’s, her pace quickening.

It was five o’clock in the morning.

Why would they go somewhere on the golf cart at this hour? Was something wrong?

She whistled for the Wheaton to follow and Abby appeared at her heels, excited to break morning tradition and head to Mariska’s house early.

Abby loved that woman and her treats.

Charlotte grabbed Mariska’s paper on her way past, partially to be helpful, but mostly to keep Abby from temptation. She peered through Mariska’s glass storm door, but couldn’t see much. The entranceway opened into a narrow hall. Everything inside sat still and dark.

She opened the storm door and called inside past the open internal door, her voice low and whispery.

Izzy barreled around the corner, slipping on the linoleum floor, landing on her hip and springing back up to continue her approach. She whined, knocking the door open wider as she pressed her nose through, whip-like tail wagging.

Charlotte opened the storm door far enough for Abby to charge into the house, her broad chest bouncing off Izzy’s head. Izzy pirouetted and trotted after the Wheaton as the two of them scrambled room-to-room—Abby investigating and Izzy following to make sure her nosy neighbor didn’t touch her stuff.

Charlotte entered and peeked into the open-plan kitchen and living room. Bob wasn’t sitting in his worn La-Z-Boy chair. She walked through to check the lanai and found the sliding door leading to it closed and locked. Mariska opened the sliding door every morning because Izzy’s water bowl was kept in the lanai, an arrangement made necessary by Izzy’s inability to drink without throwing water around the room like a sprinkler.

If the door isn’t open, Mariska isn’t up.

Staring down the hallway that led to the bedrooms, Charlotte weighed the pros and cons of creeping back there. Her presence already felt like an invasion of privacy. Entering Mariska’s bedroom would be even worse, but something didn’t feel right and she couldn’t leave until she knew everything was okay.

Entering unnaturally still houses in a fifty-five-plus community didn’t always end well, but there was no way Mariska and Bob both had heart attacks overnight. Charlotte pushed the morbid thought out of her head.

Let’s get this over with so I can get back to my coffee.

Charlotte tiptoed down the hall as the dogs barreled from the spare room and headed back toward the kitchen, nearly taking out her kneecaps in the process.

The bedroom door was ajar. The room behind it was darker than the hallway, which bathed in ambient light from the nightlight plugged into the guest bathroom wall.

Charlotte poked her head into the room and tried to focus on the bed. It looked as if someone was in there.

Huffing a sigh, Charlotte was about to turn and leave when a tickle scurried across the nape of her neck.

Something about the lumps in the bed.

Charlotte poked her head back into the bedroom. She couldn’t hear anyone snoring. Her eyes adjusted to the darkness until she could see something in the air above the sleeping bodies.

One of the sleepers had their hand in the air, thrust up like a redwood tree, as if a teacher asked a question and they had the answer.

How can someone sleep with their hand in the air?

The arm was skinny.

That shape of arm didn’t belong to Mariska or Bob. But now her eyes were adjusting to the dark and she could see the fingers at the end of the arm clear as day.

It was definitely a hand.

The time had come to abandon polite caution. Charlotte slapped at the switch on the wall and the room flooded with light.

Eyes stared back at her.

The four eyes were painted on the faces of the two mannequins occupying Mariska and Bob’s bed. Both wore wigs vaguely resembling Bob and Mariska’s hair, but nothing else about them rang true. One of them had a permanently straight arm thrust into the air. Something hung looped around that mannequin’s frozen thumb, a red ribbon holding an envelope aloft where it dangled against its wrist.

Charlotte moved to the envelope and lifted the ribbon.

Sheriff Frank would kill her if she messed up the evidence.

Charlotte ran to the en-suite bathroom and searched under the sink through piles of decorative soaps and cleaning products until she found cleaning gloves. She slipped them on and returned to the bedroom to pull the envelope from the mannequin’s grasp.

The envelope proved un-licked, its flap tucked neatly into itself. She slipped it open with her clumsy rubber-sheathed thumb and retrieved a small note from inside.

The white slip of paper held a single sentence scrawled across it.

This is what it feels like to lose someone.