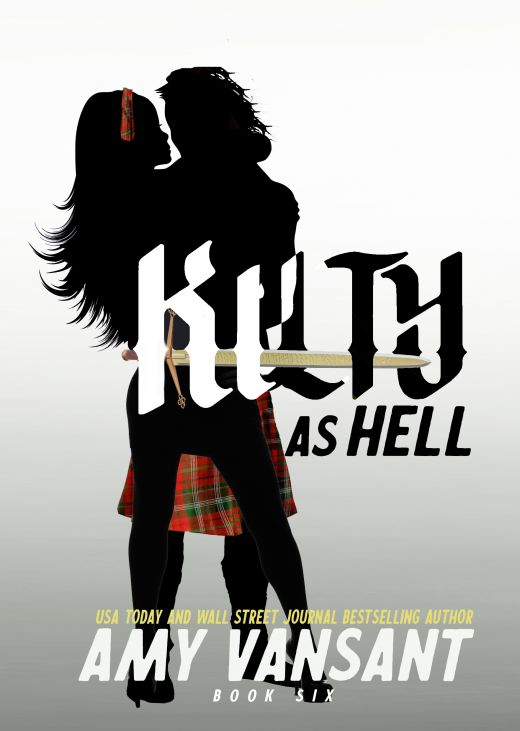 "This series is getting better and better." - Amazon Reviewer

Catriona is having a strange year. First, she found a dazed Highlander on the Hollywood studio lot where she works as a fixer and now it seems she and that big hunk of haggis are supposed to save the world from corrupted time travelers bent on destroying humanity.

She doesn't remember signing up for any of this...

When an insidious television personality reveals himself as more evil than anyone imagined and Catriona's crazy father Rune escapes, Catriona, Brochan, and their mysterious new friends, Anne and the Angeli, rush to stop the two from combining forces to create an army of darkness.

That’s when she saw the boy.

She had no idea how old he was. She wasn’t good at guessing kids’ ages. He was small, so... Two? Six? Eight?

His age wasn’t important. The important part was that the little brat was sitting on the hood of her car.

“Hey!” she snapped, speeding her step. “Get off of there.”

A seed of dread grew in the pit of her stomach.

She took a few steps forward, squinting at the boy in the dim light of the garage. He stared back at her with icy blue eyes.

His cadence mimicked that of her ever-irritable father, Rune, but his tone had a higher pitch—as if someone had sped Rune’s voice like a chipmunk’s.

She motioned to him as if she were lassoing him with her index finger.

“Is it me? I remember you taller.”

The boy scowled. “I had to start over, and I miscalculated the year. I wanted to return to this year as an adult but...I was reborn six years ago instead of twenty.”

Fiona noticed something. The last time she’d seen her father, he had one metal arm. He’d lost the original to her sister Catriona’s adoptive father, Sean, in some modern-day sword fight.

How he managed to get himself roped into that...

“You got your arm back,” she said.

He glanced at his little hand.

A woman entered the garage and made a beeline for baby Rune. Fiona’s elderly lobby attendant, Teddy, hustled behind her, chugging like a locomotive.

Rune swore. “That’s my mother,” he muttered. He raised his arms. “Help me down?”

He gritted his baby teeth. “Help me down and listen.”

Fiona stepped forward to slide her arms under the boy’s armpits, grimacing as if he were made of snot, yellow poo, and common cold viruses, which she assumed he was.

“I’ve regained my consciousness,” he said as she pulled him from the hood of her car. “I’ll be back the next chance I get, and we’ll plot our path going forward.”

She held him as he dangled in front of her. “Plot our path forward? What? You want me to help you fill out pre-school applications?”

Rune scowled, which would be an adorable expression on such a tiny face if Fiona didn’t find children, in general, repulsive.

“For your information, I start first grade next week,” he said.

He glanced over his shoulder. His mother was closing in on them.

Fiona laughed. “And then what? You’re going to throw diapers at people until they make you king?”

“I am fully potty-trained!” Rune roared. He kicked at Fiona, and she dropped him. He landed on his feet, but his little legs collapsed like noodles, and he ended up on his butt, red-faced and furious. Fiona stepped back for fear he’d lunge forward to bite her ankles.

“Oliver!” yipped his mother as she swept in and scooped the boy up from the ground. She glared at Fiona. “Were you trying to kidnap him?”

Fiona barked a laugh. “Kidnap him? Lady, I don’t want your stupid kid. The little ass was sitting on my car.”

The woman held Rune to her chest, rocking him back and forth as he hung like a ragdoll. “Oliver, what were you thinking? Why would you run away from Mommy like that?”

“Yeah, Oliver, what were you thinking?” asked Fiona.

“My name is Rune,” said the boy, glaring at his mother as he tried to push away from her.

A flash of embarrassment crossed the mother’s face as she caught Fiona’s eye. “His name’s Oliver,” she explained. “A few months ago, he told us he wanted to be called Rune. Refuses to respond to any other name.” She chuckled and threw in an overly-dramatic eye roll. “Kids.”

Fiona nodded. “Hey, just spitballing here, but did you ever consider Oliver might be a time traveler reborn as your child, who recently remembered who he really is and wants to get back to his nefarious plan to take over the world?”

The woman’s jaw dropped open, her gaze locked with Fiona’s, her hand tight around Rune’s wrist.

“What is wrong with you?” she asked.

The woman glanced at the doorman and dragged Rune back the way they’d come.

Rune glanced over his shoulder at Fiona as he tried to keep up with his stupid little feet.

She glanced at Teddy, who remained standing dumbly beside her.

“Sorry about that, Miss Fiona,” he said, looking sheepish.

Fiona pointed in the direction mother and child had disappeared.

“You keep that kid away from me,” she said. “You see him again, you call the police.”

Fiona turned and continued to her car.

She flopped into her seat and shut the door.

This is not good.

After delivering an unconscious Rune to the holding cells at the newly reconstructed Angeli headquarters, Arch Angelus Michael stopped to peruse their ancient library, hoping to shed light on the curious case of the corrupted Kairos.

How many of them were spreading ill-will instead of hope and inspiration? Was Rune an anomaly, or were the time-traveling Kairos, who were supposed to inspire kindness in humans, breaking bad everywhere? In every time?

Surely, some Angelus scribe had recorded more information about these mysterious beings. He hated not knowing more about the Kairos—corrupted or not. Up until a few months ago, he’d been under the impression he and his fellow Angeli were the only entities driven by an unidentified but undeniable impulse to protect humans.

It was a point of pride, really...

Then, some of the Angeli scholars started noticing time anomalies. Angeli didn’t jump through time.

What could these ripples in the Earth’s aura mean?

After a little poking around, they discovered the existence of time travelers, which they christened Kairos—a Greek word loosely translating to right time. He’d picked the title himself—it seemed these Kairos inspired goodness in people. Wherever they landed, good things bloomed.

They decided there was no reason to mess with the Kairos—they’d let them grow like medicinal herbs but keep an eye on them. This plan worked fine until the scholars started noticing bad things happening around the Kairos. Some of them seemed to be afflicted with the same plague the Angeli had recently suffered. This ‘virus’ made the Kairos inspire evil in people instead of good.

Michael knew it was time to step in. He’d have to—

A lesser Angel, a guard Michael recognized from dropping off Rune, appeared at the doorway of the library.

The guard crossed his hands in front of him. “Um, Michael, sir, that prisoner you brought in—”

Michael slid the book he’d been scanning back onto the shelf. “He’s awake?”

He had many questions for Rune. The Kairos, even the good ones—like the Highlander and the Hollywood group—didn’t know how they operated or where they’d come from. Not even Luther, the one who’d suddenly appeared on their radar as a freshly minted Angelus.

One of their own.

He hadn’t let on, but Luther made Michael livid.

With the other Angeli, he’d pretended Luther’s transformation was all part of a master plan only he was privy to, but...

Then he imprisoned Rune to observe and interrogate him. Rune reminded him of Seth—who’d been patient zero with their Angeli infections. He couldn’t let what happened with Seth happen again.

He needed to know more.

He needed to be prepared.

Michael snapped from his thoughts to find the Angel still blinking at him from the doorway.

“He’s awake?” he repeated, realizing he hadn’t heard an answer. He walked forward to push past the man and head toward the holding cells.

As he strode the great hall with the Angel scurrying behind him, he still didn’t hear an answer.

He turned on the heel of his Italian leather loafers, and the guard trailing him stopped to avoid smacking into him.

A bad feeling washed over Michael.

He hadn’t noticed that expression on the Angel.

The guard swallowed. “Um, not exactly...”

“What does that mean? Is he dead?”

Michael’s teeth gritted. “Say um again, and I will rip off your wings.”

Clenching a fist, Michael spun to continue his trek to the prison.

“Whatever it is, show me,” he growled.

Michael phased through the prison’s main door and stopped in front of Rune’s cell.

He turned on the guard again.

“Where did you move him?” he asked.

The Angel shook his head.

Michael’s attention shot down the hall to the prison’s office. “Video.”

The Angel nodded and led the way to the office, where another Angel sat up at the sight of Michael.

“Show me the feed,” said Michael.

The Angel tapped a few keystrokes.

The video of Rune in his cell started with the image of Michael and a guard dragging him inside to lay his unconscious body on the hard bed folded down from the wall.

He and the guard left.

Rune’s hand moved to his head, and the guard resumed playing the feed.

Rune sat up. He scanned his cell, walked to the door, and peered into the hall. He returned to the bed to sit, his legs dangling over the side.

Feeling the stump where his metal arm had been, he sighed.

Michael noticed Rune’s metal arm still sitting on a table in the corner of the guardhouse.

They hadn’t even had time to catalog the man’s arm before he escaped.

He returned his attention to the video. Rune raised his working arm and pinched his nose between his thumb and index finger.

Michael squinted at the screen.

He slumped back against the wall, and a moment later, he was gasping for air and coughing.

He sat up, shook his head, and pinched his nose again.

Three more times, he passed out only to awake gasping.

Michael glared at the guards. “You didn’t hear any of this?”

They shook their heads.

“We might have heard him cough, but we didn’t think...” The sitting guard motioned to the screen and trailed off.

On his fourth attempt, Rune passed out and then disappeared with a flash of light.

Michael gaped at the screen.

He killed himself by refusing to breathe.

He didn’t think that was possible.

Speechless, Michael stormed from the prison.

Anne had questioned the wisdom of taking Rune prisoner. He couldn’t let his girlfriend know her concerns had been justified.