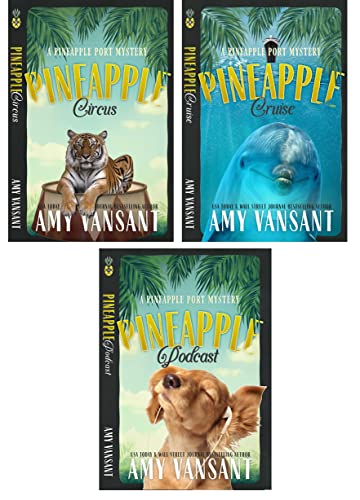 Funny, clean, small-town, sleuth novels—with a touch of romance. The heartwarming relationships between young and old and the quirky world of loveable characters will make Pineapple Port Mysteries your new favorite series!

Now in the center ring... murder!

Newly-minted private detective Charlotte Morgan, resident orphan of the Pineapple Port 55+ community, discovers she might not be an orphan after all. Stunned by the news, she distracts herself with a cat burglar who left a smear of make-upped whiskers on a sliding glass door, and a path straight to "Clown Town" a retirement community for retired circus performers. When a fortune-teller doesn't see her own death in the cards, Charlotte's burglary becomes a murder investigation!

"This was the first Pineapple Cove mystery I have read, and I was pleasantly surprised. That plot was interesting and fast-paced. Characters were well developed, and there were many subplots to add to the fun. I enjoyed it, and now plan to read books 1 to 12!" - Amazon Reader ⭐⭐⭐⭐⭐

Charlotte's neighborhood moms, Mariska and Darla, can't help with this one. They're busy infiltrating an underground golf cart racing ring, led by a shady operator and her toady sidekick...

When another circus performer falls victim to the Big Top Killer and Stephanie goes missing, Charlotte finds herself walking a highwire of danger...this killer isn't clowning around!

WARNING! Fans of the series will be particularly shocked by the breathless ending! (though every book can be read as a standalone).

When Mariska trades the brisket she won at “meat bingo” for three tickets on the new Gulf Voyager cruise ship, she, Darla, and our detective Charlotte enjoy a ladies' cruise to Key West. But when passengers start dropping like anchors, they find themselves afloat in the middle of the Gulf of Mexico...and a murder mystery.

Charlotte notices the victims were all sitting at their assigned dinner table...does that mean they're next?

The handsome ship's doctor is up to no good, the cruise director is shifty, the captain seems clueless, and one of their tablemates just dropped dead in her oatmeal. Charlotte thinks she can solve the mystery, but she'll need Darla's pickpocketing skills and Mariska's unusual fighting style...

Meanwhile, Declan gets an unexpected, giraffe-pattern-covered visitor while babysitting Charlotte's terrier—she plays a mean game of rummy and brought along a stalker...

Fans of Agatha Christie’s And Then There Were None will love this cruise-bound caper!

Charlotte hunts a killer with a curious cookie-cutter calling card who seems to be out to impress the local true-crime podcaster. The work keeps her from concentrating on the fact her boyfriend has been acting strange...it seems Declan is ready to make a few major life decisions.

Meanwhile, Mariska and Darla take over a local restaurant while the owner's out of town, and can't help but add a few things to the menu… bad idea, since the owner belongs to a true crime club that roots for the killers...

Mix in an earbud-wearing puppy, a starry-eyed deputy, and white-knuckle action and you'll find yourself wanting to move to Pineapple Port...again!