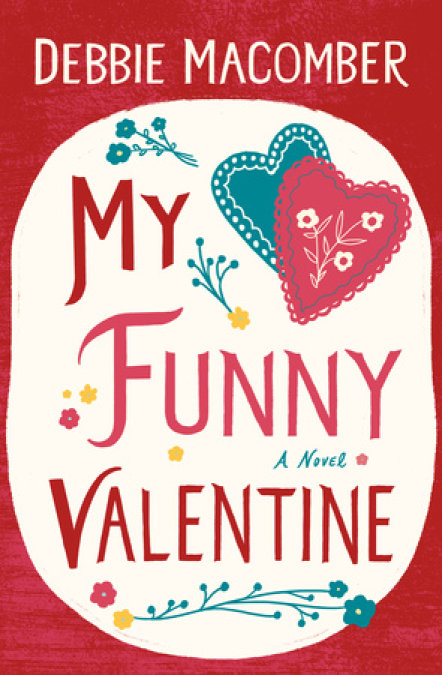 A single mother makes an unexpected match with a total stranger in this uplifting novel from #1 New York Times bestselling author Debbie Macomber.

Dianne Williams needs a man . . . but only for a night. The night of the Port Blossom Community Center’s Valentine’s dinner, to be precise. As the dinner approaches, she grows more and more exasperated by her children’s relentless efforts to set her up on a blind date. But one day, when a kind stranger helps her with car troubles, Dianne decides to take matters into her own hands.

Steve Creighton fits the bill perfectly: He’s handsome, he’s charming, and he owns a decent suit. When Dianne asks him to accompany her to a Valentine’s dinner after only just having met him, he can’t help but find the offer amusing. As he and Dianne grow closer, however, his feelings for her only intensify—and, to Dianne’s surprise, so do hers.

Dianne Williams had the scenario all worked out. She’d be pushing her grocery cart down the aisle of the local grocery store and gazing over the frozen-food section when a tall, dark, handsome man would casually stroll up to her and with a brilliant smile say, “Those low-cal dinners couldn’t possibly be for you.”

She’d turn to him and suddenly the air would fill with the sounds of a Rimsky-Korsakov symphony, or bells would chime gently in the distance—Dianne didn’t have that part completely figured out yet—and in that instant she would know deep in her heart that this was the man she was meant to spend the rest of her life with.

All right, Dianne was willing to admit the scenario was childish and silly, the kind of fantasy only a teenage girl should dream up. But reentering the dating scene after umpteen years of married life created problems Dianne didn’t even want to consider.

Three years earlier, Dianne’s husband left her and the children to find himself. Instead he found an SYT (sweet young thing), promptly divorced Dianne, and moved across the country. It hurt—in fact, it hurt more than anything Dianne had ever known—but she was a survivor and always had been. Perhaps that was the reason Jack didn’t seem to suffer a single pang of guilt about abandoning her to raise Jason and Jill on her own.

Her children, Dianne had discovered, were incredibly resilient. Within a year of their father’s departure, they were urging her to date. Their father did, they reminded Dianne with annoying frequency. And if it wasn’t her children pushing her toward establishing a new relationship, it was her own dear mother.

When it came to locating Mr. Right for her divorced daughter, Martha Janes knew no equal. For several months, Dianne had been subjected to a long parade of single men. Their unmarried status, however, seemed their sole attribute.

After dinner with the man who lost his toupee on a low-hanging chandelier, Dianne had insisted enough was enough and she would find her own dates.

This proved to be easier said than done. Dianne hadn’t gone out once in six months. Now, within the next week, she needed a man. Not just any man, either. One who was tall, dark, and handsome. It would be a nice bonus if he was exceptionally wealthy, too, but she didn’t have time to be picky. The Valentine’s dinner at the Port Blossom Community Center was Saturday night. This Saturday night.

From the moment the notice was posted six weeks earlier, Jason and Jill had insisted she attend. Surely their mother could find a date, given that much time! And someone handsome to boot. It seemed a matter of family honor.

Only now the dinner was days away and Dianne was no closer to achieving her goal.

“I’m home,” Jason yelled as he walked into the house. The front door slammed in his wake, hard enough to shake the kitchen windows. He threw his books on the counter, moved directly to the refrigerator, opened the door, and stuck the upper half of his fourteen-year-old body inside.

“Help yourself to a snack,” Dianne said, smiling and shaking her head.

Jason reappeared with a chicken leg clenched between his teeth like a pirate’s cutlass. One hand was filled with a piece of leftover cherry pie, while the other held a platter of cold fried chicken.

He shrugged, set down the pie, and removed the chicken leg from his mouth. “Okay, I guess.”

Dianne knew what was coming next. It was the same question he’d asked her every afternoon since the notice about the dinner had been posted.“

Do you have a date yet?” He leaned against the counter as his steady gaze pierced her. Her son’s eyes could break through the firmest resolve and cut through layers of deception.

“No date,” she answered cheerfully. Or at least as cheerfully as she could under the circumstances.

“The dinner’s this Saturday night.”

As if she needed reminding. “I know. Stop worrying, I’ll find someone.”

“Not just anyone,” Jason said emphatically, as though he were speaking to someone with impaired hearing. “He’s got to make an impression. Someone decent.”

“Grandma said she could line you up with—”

“No,” Dianne interrupted. “I categorically refuse to go on any more of Grandma’s blind dates.”

“But you don’t have the time to find your own now. It’s—”

“I’m working on it,” she insisted, although she knew she wasn’t working very hard. She was trying to find someone to accompany her to the dinner, only she’d never dreamed it would be this difficult.

Until the necessity of attending this affair had been forced upon her, Dianne hadn’t been aware of how limited her choices were. In the past couple of years, she’d met few single men, apart from the ones her mother had thrown at her. There were a couple of unmarried men at the office where she was employed part-time as a bookkeeper. Neither, however, was anyone she’d seriously consider dating. They were both too suave, too urbane—too much like Jack. Besides, problems might arise if she were to mingle her social life with her business one.

The front door opened and closed again, a little less noisily this time.

“I’m home!” ten-year-old Jill announced from the entryway. She dropped her books on the floor and marched toward the kitchen. Then she paused on the threshold and planted both hands on her hips as her eyes sought out her brother. “You better not have eaten all the leftover pie. I want some, too, you know.”

Jill’s gaze swiveled from her brother to her mother. The level of severity didn’t diminish one bit. Dianne met her daughter’s eyes and mouthed the words along with her.

Jason answered for Dianne. “No, she doesn’t. And she’s got five days to come up with a decent guy, and all she says is that she’s working on it."

“Everyone in town’s going,” Jill claimed, as if Dianne wasn’t already aware of that. “You’ve got to be there, you’ve just got to. I told all my friends you’re going.”

More pressure! That was the last thing Dianne needed. Nevertheless, she smiled serenely at her two children and assured them they didn’t have a thing to worry about.