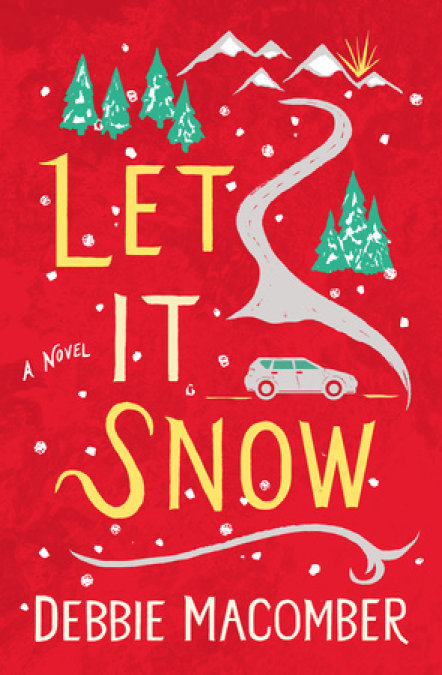 A snowstorm threatens to ruin Christmas for two mismatched strangers traveling together—until a spark of romance brightens the season in this charming short novel from Debbie Macomber.

Shelly Griffin is looking forward to spending time with her beloved father in Seattle for the holidays. But unexpected complications arise when her plane from San Francisco is rerouted to Portland due to inclement weather. To make matters worse, Shelly finds herself stuck sharing the last available rental car with one of her fellow passengers: handsome, uptight businessman Slade Garner.

Sure, he’s attractive, but Shelly isn’t immediately convinced she likes Slade. She’s not expecting the arduous journey to her father’s house in a severe blizzard to change her mind, either. But the more time Shelly spends with Slade, the more she suspects that she may have received an unexpected gift this Christmas: love.

“Ladies and gentlemen, this is your captain speaking.”

Shelly Griffin’s fingers compressed around the armrest until her neatly manicured nails threatened to cut into the fabric of the airplane seat. Flying had never thrilled her, and she avoided planes whenever possible. It had taken her the better part of a month to convince herself that she’d be perfectly safe. She told herself that the Boeing 727 would take off without incident from San Francisco and land unscathed later in Seattle. Flying, after all, was said to be relatively riskless. But if it wasn’t Christmas, if she wasn’t so homesick and if she’d had more than four days off, she would have done anything to get home for the holidays—except fly.

“Seattle reports heavy snow and limited visibility,” the captain continued. “We’ve been rerouted to Portland International until the Seattle runways can be cleared.”

A low groan filled the plane.

Shelly relaxed. Snow. She could handle snow. She wasn’t overjoyed with the prospect of having to land twice, but she was so close to home now that she would have willingly suffered anything to see a welcoming smile light up her father’s eyes.

In an effort to divert her thoughts away from impending tragedy, Shelly studied the passengers around her. A grandmotherly type slept sedately in the seat beside her. The man sitting across the aisle was such a classic businessman that he was intriguing. Almost from the moment they’d left San Francisco, he’d been working out of his briefcase. He hadn’t so much as cracked a smile during the entire flight. The captain’s announcement had produced little more than a disgruntled flicker in his staid exterior.

Shelly had seen enough men like him in her job as a reporter in the federal court to catalog him quickly. Polished. Professional. Impeccable. Handsome, too, Shelly supposed, if she was interested, which she wasn’t. She preferred her men a little less intense. She managed to suppress a tight laugh. Men! What men? In the ten months she’d been living in the City by the Bay, she hadn’t exactly developed a following. A few interesting prospects now and again but nothing serious.

As the Boeing 727 slowly made its descent, Shelly’s fingers gripped the armrest with renewed tension. Her gaze skimmed the emergency exits as she reviewed affirmations on the safety of flying. She mumbled them under her breath as the plane angled sharply to the right, aligning its giant bulk with the narrow runway ahead.
Keeping her eyes centered on the seat in front of her, Shelly held her breath until she felt the wheels gently bounce against the runway in a flawless landing. A burst of noise accompanied the aircraft as it slowed to a crawl.

The oxygen rushed from Shelly’s lungs in a heartfelt sigh of relief. Somehow the landings were so much worse than the takeoffs. As the tension eased from her rigid body, she looked around to discover the businessman slanting his idle gaze over her. His dark eyes contained a look of surprise. He seemed amazed that anyone could be afraid of flying, and he was utterly indifferent to her apprehension. The blood mounted briefly in her pale features, and Shelly decided she definitely didn’t like this cheerless executive.

The elderly woman sitting next to her placed a hand on Shelly’s forearm. “Are you all right, dear?”

“Of course.” Relief throbbed in her voice. Now that they were on the ground, she could feign the composure that seemed to come so easily to the other passengers.

“I hope we aren’t delayed long. My daughter’s taking off work to meet my flight.”

“My dad’s forty minutes from the airport,” Shelly murmured, hoping that he’d called the airline to check if her flight was on time. She hated the thought of him anxiously waiting for her.

The other woman craned her neck to peek out the small side window. “It doesn’t seem to be snowing much here. Just a few flakes floating down like lazy goose feathers.”

Shelly grinned at the verbal picture. “Let’s hope it stays that way.”

She remained seated while several of the other passengers got up and left the plane. The businessman was among those who quickly vacated their seats. From what the captain had said, they wouldn’t be in Portland long, and Shelly didn’t want to take a chance of missing the flight.

After checking her watch every ten minutes for forty minutes, Shelly was convinced that they’d never leave Oregon. The blizzard had hit the area, and whirling snow buffeted the quiet plane with growing intensity. Her anxieties mounted with equal force.

“This is the captain speaking.” His faint Southern drawl filled the plane. “Unfortunately, Seattle reports that visibility hasn’t improved. They’re asking that we remain here in Portland for another half hour, possibly longer.”

Frustration and disappointment erupted from the passengers seated on the plane, and they all began speaking at once.

Shelly added a silent amen to that! As it was, she was beginning to feel claustrophobic trapped inside the plane. Unsnapping her seat belt, she stood, reached for her purse and headed down the narrow aisle toward the front of the plane.

“Do I have time to make a phone call?”

“Sure,” the flight attendant answered with a cordial smile. “Don’t be long, though. The conditions in Seattle could change quickly.”

“I won’t,” Shelly promised and made her way into the airport terminal.

It wasn’t until she was sorting through her purse for change that she noted the unsympathetic businessman from her flight had the phone booth adjacent to hers.

“This is Slade Garner again,” he announced with the faintest trace of impatience creeping into his voice. “My plane’s still in Portland.”

A pause followed while Shelly dumped the contents of her coin purse into her hand and scowled. She didn’t have change for the phone.

“Yes, yes, I understand the snow’s a problem on your end as well,” he continued smoothly. “I doubt that I’ll make it in this afternoon. Perhaps we should arrange the meeting for first thing tomorrow morning. Nine o’clock?” Another pause. “Of course I realize it’s the day before Christmas.”

Rummaging in her purse for a quarter, Shelly managed to dredge up a token for the cable car, a dried peach pit and a lost button.

Pressing her lips tightly together, she mused what a coldhearted tycoon this businessman had to be to insist upon a meeting so close to Christmas. Instantly she felt guilty because her thoughts were so judgmental. Of course he’d want to keep his appointment. He certainly hadn’t taken this flight for his health. Her second regret was that she had intentionally eavesdropped on his conversation, looking for excuses to justify her dislike of him. Such behavior was hardly in keeping with the Christmas spirit.

Pasting on a pleasant smile, Shelly stepped forward when Slade Garner replaced the receiver. Abruptly he turned around.

“Excuse me.” His gaze refused to meet hers, and for a second Shelly didn’t think that he’d heard her.

“Yes?” His expression was bored, frustrated.

“Have you got change for a dollar?” She unfolded a crisp one-dollar bill, anticipating the exchange.

Slade uninterestedly checked the contents of his pocket, glaring down at the few coins in his palm. “Sorry.” Dispassionately he tucked them back in his pocket and turned away from her.

Shelly was ready to approach someone else when Slade turned back to her. His dark brows drew together in a frown as something about her registered in his preoccupied thoughts. “You were on the Seattle flight?”

“Here.” He handed her a quarter.

The corners of Shelly’s mouth curved up in surprise. “Thanks.” She was convinced that he hadn’t heard her as he briskly walked away. Shelly didn’t know what difference it made that they’d shared the same plane. Without analyzing his generosity any further, she dropped the coin in the slot.

After connecting with the operator, Shelly shifted her weight from one foot to the other while the phone rang, waiting for her father to answer.