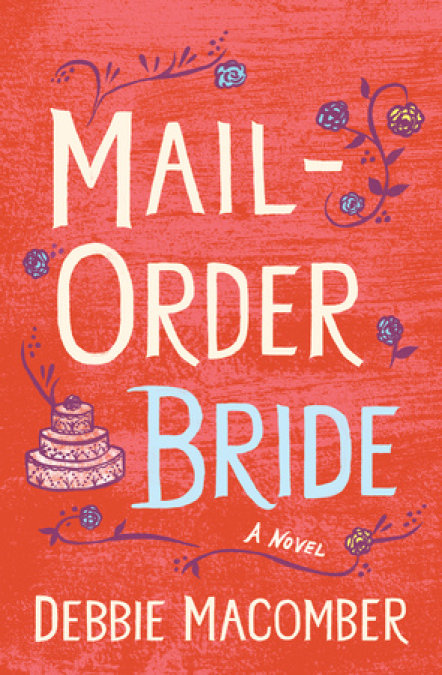 This irresistible classic novel from Debbie Macomber puts a modern spin on an old-fashioned way of finding “the one.”

After Caroline Myers gets her heart broken, her beloved great-aunts send her on a spur-of-the-moment northern adventure, equipped with little more than a batch of their special spiked tea. But soon after hopping a plane to Gold River, Alaska, a still loopy Caroline takes part in an odd ceremony that ends with a kiss from her personal tour guide. The next thing she knows, she wakes up with a ring on her finger.

Paul Trevor has always wanted a family, but his long work hours and remote location make dating impossible, so he takes an unconventional first step: sending away for a wife. He falls hard for Caroline’s photograph and letter, but after the wedding, it’s clear they’ve both been duped by his new bride’s well-meaning aunts. Caroline’s afraid this trip has been a mistake. Now Paul just needs to convince her it’s the best mistake she’ll ever make.

“I’m so worried about dear Caroline,” Ethel Myers murmured thoughtfully, sipping tea from a dainty porcelain cup. Her fingers clutched a delicate lace-trimmed handkerchief, and when a droplet of moisture formed in the corner of her eye, she dabbed it gently. “Sister, I do believe the brew is stronger today.”

“And we must do something to help Caroline.”

Mabel shook her head sadly. “Perhaps if you and I had married suitable gentlemen all those years ago . . .”

“Oh yes, then maybe we’d know how to help that sweet, sweet child.” Ethel’s faded blue eyes brightened momentarily. “You do remember that George Guettermann once asked for my hand.”

“As I recall, Mother was quite impressed with him.”

Ethel’s shoulders sagged. “But Father was suspicious from the first.”

A wistful expression marked Ethel’s fragile features. “If only he hadn’t already been married.”

“We must learn to forgive him, Sister.”

Mabel nodded and lifted the steaming pot of brew. “I was thinking of Caroline’s young man. Another cup, Sister?”

“Oh dear, should we?” Ethel’s hand flew to her mouth to smother a loud hiccup, and she had the good grace to look embarrassed.

“There was something in his eyes.”

“Indeed, there was something about his eyes.” Ethel took another sip and lightly patted her chest at the strength of their father’s special recipe. “Sister, the brew . . .”

“Oh yes. Think. What can we do for dear Caroline?”

“If only her mother were alive.”

“Her great-great-grandmother, perhaps. She would know what to do.” Ethel smiled. “Do you recall how she frowned on courting? Said it simply wasn’t necessary.”

“Grandmother would. Asa Myers brought her to Seattle with the other mail-order brides. She and Grandfather knew each other less than twenty-four hours before they were married.”

“A courtship wasn’t necessary and they were so happy.”

“With seven children, they must have agreed quite nicely,” Ethel said and giggled delightedly.

“If only we could find Caroline a husband.”

“But, Sister . . .” Mabel was doubtful. For more than fifty years they’d been unable to find husbands of their own. So how could they expect to come up with one for their beloved niece?

Ethel’s hand shook as she lowered the cup to its saucer. “Sister, Sister! I do believe I have the solution.” Her voice quavered with excitement as she reached for the morning paper.

“Our own Caroline will be a mail-order bride.”

Mabel frowned. “But things like that aren’t done in this day and age.”

Ethel fumbled with the paper until she located the classified section. She folded back the unwieldy page and pointed to the personals column. “Here, read this.”

“But, Sister, do we dare?” She eyed the typewriter—no computers for them!

“We must. Caroline is desperately unhappy.”

“And she did have the opportunity to select a husband of her own.”

“She chose poorly. The beast left her standing at the altar.”

“Oh no, we can’t let her know. Our Caroline would object strenuously.”

“Sister, I do believe the brew has helped.”

Ethel raised her cup and her older sister automatically refilled it. A smile of satisfaction lifted the edges of her mouth. “Father’s recipe was most beneficial.”