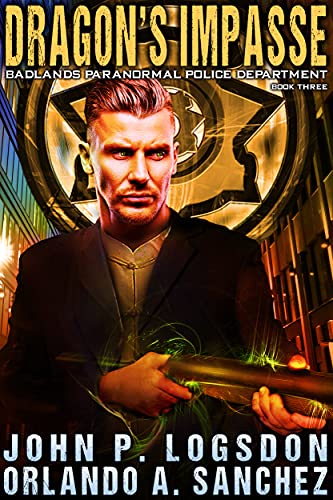 In order to uphold the law--he's going to need to break a few.
After returning from crossing the Badlands on a weapons run, Chief Zeke Phoenix of the Paranormal Police Department finds his precinct taken over by The Company, Rake Masters, and a ton of corruption.

Masters exploits Zeke's biggest flaw, his honorability. A plan is set to exterminate Zeke Phoenix and every member of his team...with extreme pain. To start, the fake PPD brands the real PPD as criminals, telling everyone in Infernal City to take them down.

That ties Zeke's hands, forcing him to beat Masters at his own game.

In other words, in order to do the right thing, Zeke has to do plenty of wrong. He must dive into the criminal element and create his own gang, setting himself up to embrace a life of crime. But will it ever get that far? With luck, no, but Zeke is beginning to learn that sometimes honor and duty don't go hand in hand.

If Zeke and his crew don't pull this off, The Company will have complete control of Infernal City, Masters will wield an unfathomable amount of power, and every member of the Badlands PPD will be left gazing lifelessly at the sky.

A regular day in the life of a PPD chief in the Badlands...