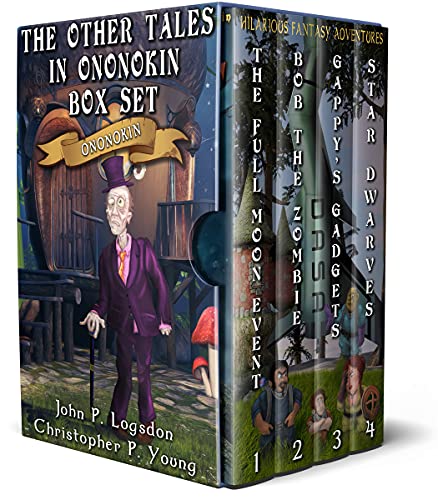 The Other Tales in Ononokin

What do an old wizard, a balding vampire, a zombie named Bob, and headstrong gnomes have in common? They make for wonderfully hilarious characters!

This box set takes you on hilarious adventures with four unique characters who live in the land of Ononokin!

Please note these are not new Ononokin books. it's simply a new box set that puts all the other tales in one spot, which was due to Ononokin fans asking us to do so!

A middle-aged vampire. A newly infected werewolf. An assassin who wants his payday.

Paulie Vergen is an overweight, balding vampire with only one fang. He longs for adventure but has always been too afraid to go anywhere. But then a newly infected werewolf shows up at his door. In doggie form, the werewolf is constantly soiling everything and causing trouble, and in human form he has no idea who he is...Paulie names him Burt Biscuits (or Mr. Biscuits when he's in doggie form).

Due to the local vampire police learning that Paulie is harboring a werewolf, he has to get out of town quick or he'll end up in jail. Therefore, he decides to help Burt get to the land of the werewolves so that the man can get his memories back. But the gnomes are at war, the portal system is erratic at best, the werewolves are less than cooperative, and riding in an ogre-run trolley isn't nearly as fun as it sounds. Worse, somebody has hired an assassin to make sure that they never reach their destination at all…

A depressed zombie. An unemployed dwarf. A thief looking to clear her name.

Bob is a zombie who struggles daily to avoid broken bones, smelling offensive, and to keep his flesh intact. He's also depressed, though he's been seeking treatment for that. But when a band of thieves steal his hand so they can make a batch of Elfagra (for men who need a little lift), Bob has to either give up or go after them....

Gappy Whirligig is an industrious gnome who has yet to reach the Age of Tinkering. He's 42. All he wants to do is build a flying contraption. Unfortunately, building such a device requires a fuel source that may make him explode, and the gnome town of Hubintegler has strict rules against inhabitants blowing themselves up prior to the age of 50. But when Gappy finds himself suddenly alone in the world, he decides to leave Hubintegler's rules and regulations behind as he seeks to make his mark in the seedy city of Planoontik...

Star Dwarves
A gnome on a mission. A crew of (mostly) dwarves. A trip none of them could have expected.
The Underworld has always been the hub of technology in Ononokin, but up until now they could only dream of leaving the atmosphere.

When the gnome known as Buzzrigger Tinkerpop connects with an enterprising dwarf by the name of Kusdrin Chainhelm, the Dwarf Aeronautic Space Administration (DASA) is born. Their first rocket is called The Pointy Anvil and it's only a couple months away from liftoff. The crew has been selected, training is underway, and they're in the final phase of fit and finish!

Too bad there are often events that cause things to go awry, especially on Ononokin.

But when things get really out of hand, the crew of The Pointy Anvil might just find themselves entering an entirely new reality that is no longer part of Ononokin at all!

If you love Terry Pratchett, Robert Asprin, Piers Anthony, Discworld, Xanth, Myth Adventures, and/or Monty Python, you'll have a blast with the land of Ononokin.