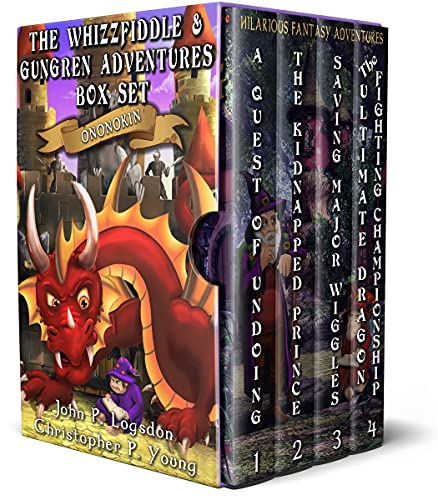 A land where laughs and adventure are the real magic...
By popular request of Ononokin readers, all the Whizzfiddle and Gungren books have been put together in a single box set! It chronicles the complete adventure of Gungren working toward becoming a full-fledged wizard...as Whizzfiddle does his best to maintain his sanity.

Please note these are not new Ononokin books. it's simply a new box set that flows the Whizzfiddle & Gungren Adventures without interruption.

A Quest of Undoing
A drunk wizard. A lizard starting a nudie magazine. A former apprentice seeking revenge.

After hundreds of years of wizardry, Master Whizzfiddle wants nothing more than to sit back and relax for the rest of his cursedly long life. His vindictive ex-apprentice has other plans. With a legal challenge out for his cushy guild membership, Whizzfiddle has 30 days to undertake a near impossible quest…

To get the eternal rest he craves, the lazy wizard must travel with a band of creatures cursed to live out their worst qualities. Returning the ugly elf, the huge dwarf, and the terrified knight to their former glory will take courage. It’ll take perseverance. And for Whizzfiddle’s magic to keep him from a lifetime of hard labor, it’ll take a whole lot of booze…

The Kidnapped Prince
A prince gone missing. A wedding in trouble. An apprentice being tested.
Gungren is tired of waiting to become a full-fledged wizard. Unfortunately for him, Whizzfiddle isn’t one who takes well to his apprentices pushing him around. But when the Fates decide to give one of their infamous quests to Gungren, it leaves Whizzfiddle with little choice but to lend his support. Unbeknownst to Whizzfiddle, though, the quest is only part one of three.

They must travel to the Underworld in order to find and save the prince. But getting there isn't easy, especially since they have to bring along Princess Jill Henroot, who is the fiancée of the missing prince, and who happens to be quite a pain in the rump. Worse, the Fates have decided to film the entire adventure, making for one problem after another.

Saving Major Wiggles
A misunderstanding. A hunt for a soldier. A film in progress.
Just as Gungren begins to complain about his time running out, he gets called in to do the second leg of his three-part Fate Quest. But when Whizzfiddle complains that the quest is far too dangerous, the two argue. Then, due to a mixup, Gungren thinks his master has commanded that he just go off and handle the mission on his own...

The tiny giant must join the military and find a major by the name of Wilbur Wiggles, an annoying fellow who thinks that war is managed by officers while drinking tea as lowly foot soldiers are moved around on a map.

The Ultimate Dragon Fighting Championship
A dragon in turmoil. A master filled with worry. An apprentice ready to battle.
The Ultimate Dragon Fighting Championship (UDFC) only occurs once every ten years. This is the 100th running. That means lights, cameras, and coverage like never before. Plus, the reigning champion, a dragon known as Crazell, can hit a milestone of twenty-five consecutive title defenses if she can pull in another win. But when it's learned that the Fates have decided to make Gungren join the event as the final leg of his three-part Fate Quest, the proverbial poop hits the fan.

Worse, unless Gungren wants to turn back into a big dumb giant and lose his dream of becoming a full wizard once and for all, he'll have to pull out all the stops in an attempt to win...

If you love Terry Pratchett, Robert Asprin, Piers Anthony, Discworld, Xanth, Myth Adventures, and/or Monty Python, you'll have a blast with the land of Ononokin.