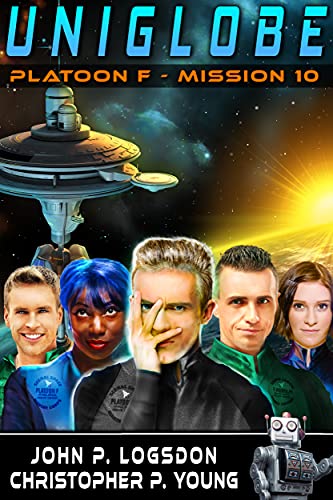 Just when they were starting to find a rhythm...

Captain Don Harr and the crew of The SSMC Reluctant had taken a few years to recover, but they'd finally found their niche. They were working as a shipping contractor, ferrying various goods between planets. It was a dicey business, but when your crew consisted primarily of androids who were super fast, incredibly strong, and amazingly attractive, you tended to do better than most.

But as with everything for Platoon F, things had a way of getting goofed up.

The first issue to smack them was a job that required they deliver a package to Planet Head Stanley Parfait on Fantasy Planet. The second issue was finding out precisely what it was they'd delivered. But it was the third issue that really got them into hot water. Some old friends of Captain Harr and the gang needed their help to get out of a prison-like structure known as the UniGlobe.

It would have been nice if they had simply asked, but that wasn't their modus operandi. Oh no, friends like these just took you away from whatever you were doing, no matter how important it may have been to you.

UniGlobe is the hilarious tenth installment in the Platoon F sci-fi series. If you like warped comedy, ridiculous physics, and more innuendo than you can shake a stick at, then you’ll love John P. Logsdon and Christopher P. Young’s insane story.

Buy UniGlobe today and learn why serving on The SSMC Reluctant can be a real bitch!
Read more