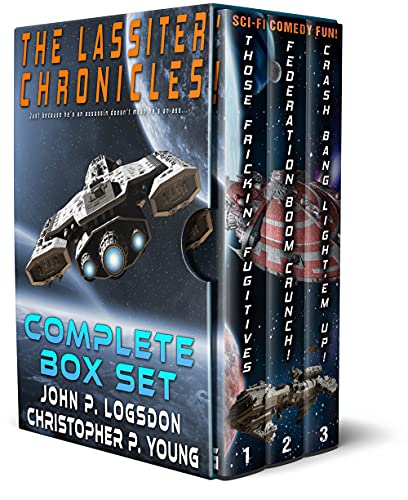 Just because he's an assassin, doesn't mean he's an ass!
Lassiter is an elite assassin who consistently strives for perfection. To that end, he installed therapy software that guaranteed he'd improve in every way. The A.I. therapist, Norman, has noted that Lassiter is making positive strides. Lassiter doesn't quite agree, though, as he's pretty confident his speed and efficiency are declining.

So is his judgment...

In fact, he's suddenly grown a soft spot for hard-luck cases. This lands him with a brand new employee named Biff, who challenges his authority at every turn. The guy happens to be a great cook, though, and living on protein bars hasn't exactly been fine dining...

Book 1: Those Frickin' Fugitives
It was supposed to be a standard person-pickup mission. Unfortunately, the target turns out to be an unexpected fugitive named Nora, and she puts Lassiter's ship on the Fed's radar. More concerning, though, is that she also lands them in the path of a psychotic, exceedingly wealthy, martial arts expert who wants nothing more than to see them all dead.

That's when Biff shows he can do more than cook, and he also teaches Lassiter that he's in desperate need of hand-to-hand combat skills.

Book 2: Federation Boom Crunch!
Captain Narcy of the Federation ship known as the Galant is seeking revenge. Lassiter kind of clobbered the man over the head, and that doesn't sit well with a Fed captain. Narcy wants to see Lassiter spend the rest of his days in prison.

But there may just be someone from Lassiter's past who may have a different plan in mind for Lassiter and his crew.

Book 3: Crash Bang Light'em Up!
Lassiter's past life returns, bringing him full-circle to the profession he'd left years ago.

As far as missions go, it's a damn doozy.
Read more