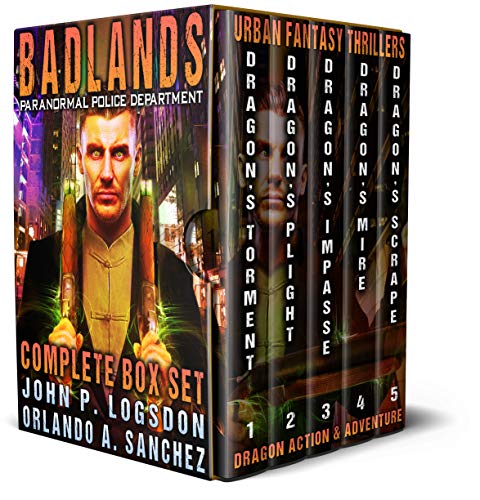 Book 1: Dragon's Torment
When a dead hellion crashes into his life, Zeke and the Badlands PPD will break all the rules of the City. To find the killer, he’s going to make some powerful enemies who would prefer to see the new dragon chief of the PPD retired…permanently.

If Zeke fails, the Badlands will plunge into a civil war.

Book 2: Dragon't Plight
When an unmarked package hits his desk, mayhem turns to chaos. The package’s contents trigger a chain of events, leaving the only true law of the land understaffed, unarmed, and under attack.

Book 3: Dragon's Impasse
After returning from crossing the Badlands on a weapons run, Chief Zeke Phoenix of the Paranormal Police Department finds his precinct taken over by The Company, Rake Masters, and a ton of corruption.

Book 4: Dragon's Mire
Masters was put on his heels, but he's no fool and he's got plenty of contacts. Francis from The Morgue, for one. In other words, Masters has an army of zombies at his fingertips. These aren't the slow type of zombies, either. They're the kind that rip and shred.

Book 5: Dragon's Scrape
The two sides build their positions and prepare for bloodshed that's to come. The full bore of the PPD, the amassed gangs on both sides, hellions, goblins, valkyries, a pixie brigade, a single troll, and the land of dragons will square off to see who truly owns the Badlands.

Zeke Phoenix is the only person who can end it, and he's the most dangerous of them all...

★★★★★ ‘The story is fast paced, full of action - assassination attempts, explosions, chaos, mayhem, Directors, Underworld creatures of all varieties - and plenty of ribald humor and banter!’

Scroll up and buy your copy today!
Read more