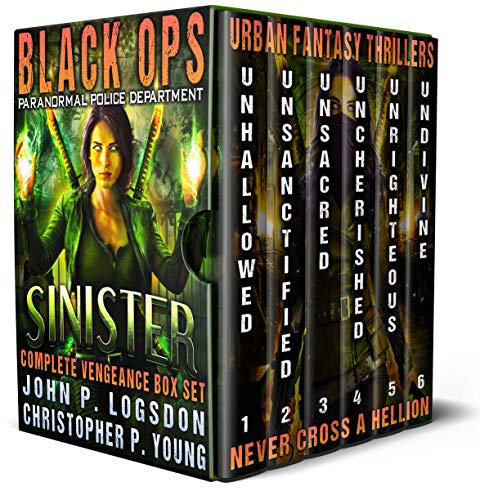 They thought they could destroy House Sinister for good, but they weren’t expecting Evangeline...
The Black Ops Paranormal Police Department box set bring you over 1,400 pages of fast-action, heavy snark, adult themes, and awesome adventure!

Evangeline was living a great life in the Badlands as a Guard at House Sinister, but her world is shattered when three rival Houses attack. She's forced to watch as her mentor and father figure is slaughtered.

His dying command: The House must survive at all costs.

Translation: Evangeline must leave everything behind, run from assassins, and join up with the Black Ops Paranormal Police Department until she can return home and exact her vengeance.

Book 1: Unhallowed
There are killers hunting for Evangeline, and the PPD is putting her life on the line daily, but rage is on her side. All she has to do is survive one year and then she can bring honor back to House Sinister.

Book 2: Unsanctified
The Black Ops Paranormal Police Department has learned that Salem is in charge of the local mob, and they've been tasked with assassinating him.

Book 3: Unsacred
It was bad enough for Evangeline to spend a year running for her life. Now, she was stuck between the Houses who were hunting for her, the hellion-run mob, and an army of normals who are on a power-drug.

Book 4: Uncherished
The tables are turned when Evangeline and her crew find out that the super drug being used to turn normals into crazed killers is back on the market, and it's being supported by the Los Angeles Paranormal Police Department.

Book 5: Unrighteous
The war is on, and Evangeline is standing right on the front lines. She's never been one who liked playing it safe.

Book 6: Undivine - A Flashback Novel
Eve is assigned an espionage mission that will push her to the limit, forcing her to channel distasteful things she'd learned in her youth. In order to succeed, she'll have to face horrors she's never even imagined.

What readers are saying about Black Ops: Sinister Vengeance...

★★★★★ ‘Rich, action-filled, and yes, humorous exploits rampage throughout, making this book very difficult to put down.’

★★★★★ ‘Such a great first book! And so many new and fun characters. Snarky dialogue! Inventive invective! Action and a strong plot! I can’t wait for the next book.’

★★★★★ ‘She is one kickass survivor that gives gives lessons in how to be able to live and understand yourself.’

★★★★★ ‘This book was a bit of a change from the standard PPD books. It gave a much more intimate look to the politics and life in the Badlands, but also introduced a new way of looking at the interactions between Hellion Houses. It still has much of the humor and snark that the PPD series is known for, but these new elements add just a little more.’

★★★★★ ‘It's delivers on all fronts. Humorous banter throughout and detailed action you can picture vividly, you won't want to put this book down.’

Scroll up click buy now to get your copy today!