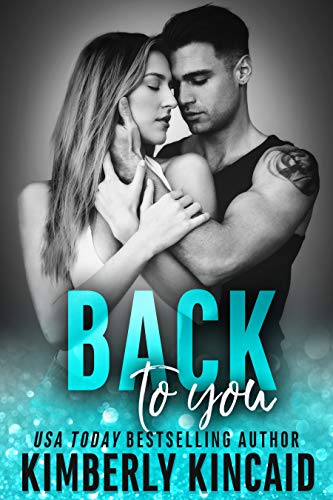 "A fabulous, emotional, super sexy second-chance romance. I loved every minute of it!"

She never thought she'd see her ex again...
Until she became his boss.

Parker Drake wants only one thing. To become a doctor.
And he's not going to let anything—
not his bad rap as a rule-breaker
or the the disaster that ended his last internship—
stand in his way.

He'll even work with the one woman he never got over losing.
His gorgeous ex-wife.
His boss.

All work, no play? Fine by Charleston Becker.
At least her job will always be there.
But now the man who broke her heart
is working in her ER,
and as much as Charlie hates it, Parker's hotter than ever.

Tempting her at every turn.

She shouldn't want a second chance.
Parker still likes to break all the rules.
But this time, he's playing for keeps.
And everything's on the line.


A steamy medical contemporary romance from USA Today best-selling author Kimberly Kincaid. Watch this reckless hero do whatever it takes for a second chance with his first love. Full-length standalone story with action in the emergency room and the bedroom, and a sweet-and-sexy happily ever after.

Of all the ways Parker Drake had envisioned his first day as an intern, witnessing a sedan-versus-bike messenger that resulted in an open tib-fib before he’d even walked through the hospital doors hadn’t been in the top one thousand.

Being face to drop-jawed stare with the one woman he’d been certain he’d never lay eyes on again, and who probably hated him as passionately as he’d once loved her?

Had to be a one in a million.

The man in his arms groaned in pain, snapping time back into motion and Parker back to reality in less than a heartbeat.

“I need a little help over here,” Parker called out, and fucking great, Tess was here, too?

“What happened?” Charlie asked as Tess hollered for a gurney and a C-collar, both of which arrived astonishingly fast.

Parker blinked, his brain momentarily too swamped with adrenaline to form a reply. Focus. On something other than how the hell Charlie is here in front of you instead of far, far away in Nashville. Now would be good, since you’re holding a guy whose tibia is sticking out of his skin.

Well, that did the trick to redirect his thoughts from her, at least temporarily. Then again, work always did. “Mike Yoshida, got clipped by a Camry while riding his bike,” Parker said, placing the man on the gurney and diving right in to the bullet. “Obvious right lower leg deformity, GCS 12. No apparent head or neck trauma, no LOC.” The guy’s helmet was still firmly in place. Not that it had done his leg a lick of good, but at least that would be a hell of a lot easier to repair.

“Hi, Mr. Yoshida, I’m Dr. Michaelson, and this is Dr. Becker,” Tess said, but only after she’d shot a micro-frown in Parker’s direction that promised nothing good once their patient was stable. “We’re going to take care of you, okay?”
“O-okay.” He tried to nod, but Tess placed her hands firmly over the sides of his helmet to keep him still as Charlie grabbed the C-collar.

“Dr. Becker and I are going to put this around your neck. I know it’s not super comfortable, but we have to err on the side of caution until we can get a closer look at your spine.”

Charlie, who was in street clothes, and Tess, who wasn’t, had both gloved up to examine the man while a nurse guided the gurney past the automatic doors and into a curtain area.

“You didn’t think to call a paramedic instead of dragging him in here on your own?” Charlie asked, her red-gold brows pulled low in disapproval, as Tess continued her rapid trauma assessment on the patient.

Parker took a deep breath and reminded himself that he deserved every degree of chilliness Charlie wanted to offer. “I am a paramedic. Or I was for five years. Anyway”—he grabbed a pair of nitrile gloves from the dispenser box on the wall and slid them into place—“the accident happened less than a block away. Calling an ambo would’ve been stupid.”

Dropping her voice enough to keep it from the patient while Tess asked him a few more questions and examined his leg, Charlie said, “He was in an MVA, and you moved him without a C-collar. That is stupid.”

Shock popped Parker right in the solar plexus. “Seeing as how we were in the middle of a busy city street and the guy had already been hit by a car once, I thought getting him out of traffic might be prudent.”

“Parker—” she started, but he shook his head. As much as he wanted to, arguing with her was a bad idea for several reasons, none of them small. Anyway, he couldn’t change what he’d already done.

“Yes, I moved him,” Parker said quietly. “But I did an RTA in the field. He was alert and reactive, with no signs of a head or neck injury. He was in a lot of pain and had an open fracture, and I wanted to get him treated as fast as possible. So, I made a judgment call.”

If her expression was anything to go by, Charlie remained highly unimpressed. “So he didn’t present with any outward signs of a spinal injury,” she argued. “That doesn’t mean he’s fine. There could be any number of things going on that you can’t see.”

“I know that.” Parker had completed four years of medical school, nearly seven months of his first internship, and three of his five years at Station Seventeen as a lead paramedic. He was hardly a dumbass.

“This tib-fib is pretty straightforward,” Tess said loudly enough to grab both of their attention. She’d—damn—already cut away the patient’s jeans to reveal a nasty break, and splinted the injured leg to keep it stable. “Let’s get head and neck films to see what we’re dealing with otherwise.” She swung her stare to the dark-haired nurse who had appeared with the gurney and stuck around for the ride. “And page Dr. Sheridan, along with whoever’s on call for ortho, stat, please.”

“I’ve got the films, Dr. Michaelson,” Charlie said, her eyes on Tess’s very pregnant belly, and Parker’s throat went tight. But then Tess had stepped out of the curtain area and the nurse had produced two protective aprons, and Charlie was shooting the X-rays as easily as she’d order a fucking latte.

“Head and neck are clear,” she called to Tess a few seconds later, who returned to the curtain area and looked at the images on the portable monitor, nodding her agreement.

“It’s just my…leg that hurts.” The man’s labored grunt punctuated the claim, and Charlie—Christ, how was it possible that she’d gotten even prettier over the last six years—softened her gaze, leaning in toward him.

“Do you have any drug allergies, Mr. Yoshida?”

Charlie looked at the nurse. “Start an IV so we can get some pain meds on board while we wait for those consults. We’re also going to need to do a full set of films on that leg for ortho.”

“I can start the IV,” Parker offered, taking a step toward the supply cart beside the gurney. Anything would be better than just standing here, useless.

Charlie’s arm shot out, and even through his shirt and hers, the contact sizzled through him as if they’d touched intimately, skin on skin. “No. You absolutely cannot.”

“I’m qualified to do it,” he said. He’d started hundreds of lines. Maybe even thousands. For God’s sake, Charlie had been there when he’d learned how.

“You’re a paramedic,” Tess said, clearly on Team Charlie, and also clearly unaware that he’d tendered his resignation at Station Seventeen to return to medical school and had been placed here at Remington Mem for his internship, take two. “We have very capable nurses. You brought Mr. Yoshida in, but we’ve got it from here, Parker. You can go.”

His pulse slapped faster. “Actually, I—”

The curtain moved, the metal loops shushing along the track built in to the ceiling and stopping the rest of Parker’s words in his windpipe.

“Someone called for a—whoa, yeah. Surgical consult,” said Jonah Sheridan, who had appeared behind Tess. Parker recognized him, both from running patients in to the emergency department for the last five years and the semi-rare occasion that the staff at Remington Mem came to hang out at The Crooked Angel, where the first responders from Station Seventeen and the cops from the Thirty-Third precinct tended to gather.

Sheridan completed a quick but thorough perusal of the patient’s injury. Parker listened carefully as Tess gave the guy a brief rundown and the nurse started the IV, then again as Sheridan looked at the patient.

“Mike,” the guy groaned, leaning back against the gurney. “Mike Yoshida.”

“Well, Mr. Yoshida, I hope you like Jell-O, because you’re going to be here for a day or two. You definitely need surgery to repair that injury to your leg.” He turned toward the dark-haired nurse, who Parker belatedly recognized from his first internship six years ago, and damn. How could he have changed so much while this place had stood stock-still?

“Kelly, let’s get some antibiotics in that IV along with the pain meds Dr. Becker ordered, and call surgery to book an OR.” Dr. Sheridan rattled off a few more directives—specific medications and dosages, plus a rush on the X-rays Charlie had already ordered—then shifted to look at Parker, blond brows lifted in question.

Shit. “Intern. Parker Drake.” Tugging off his still-spotless gloves, he extended his hand, trying as hard as he possibly could to un-hear the twin gasps of shock from Tess and Charlie.

“Huh,” Jonah said. “A new attending and a paramedic intern. The hits just keep on comin’. Okay, Mr. Yoshida.” He turned back toward the patient while Parker battled some shock of his own. Charlie was working here now? As an attending? Surely, he’d misunderstood. “Let’s get you ready for surgery, shall we?”

“OR three is open, Dr. Sheridan,” Kelly said, hanging up the wall-mounted phone. “They’re expecting you.”

“Perfect. We can do the films upstairs while I scrub in and get Dr. Mallory up to speed. Let’s go.”

Sheridan and Kelly wheeled the gurney from the curtain area. Now would normally be the time for everyone to scatter, with the patient stable and the handoff to a surgeon made. But since everything about the current situation was far from normal, Tess killed the four hundred-pound silence with a long, low exhale.

“An intern. Starting today.” He looked at Charlie, whose expression was impossible to decipher. “Did Dr. Sheridan say you’re…”