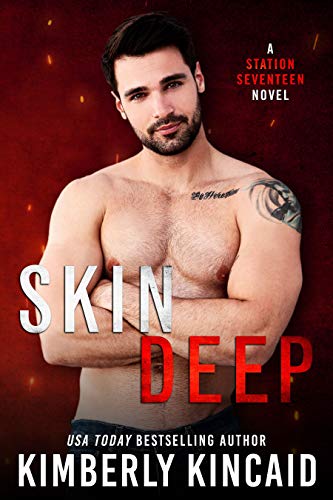 He swore he'd never forgive her
Until he had to trust her with his life.

Not even when he makes a
bone-chilling discovery at the scene of a fire
and she needs his help to
catch a killer.

Isabella won't stop until she gets justice
even if she has to work with Kellan Walker to do it.
But the closer she gets to the
tall, dark, and scorchingly hot firefighter,
the more she wants to
sleep with the enemy.

But real danger lurks in the shadows.
The stakes grow higher. The passion hotter.
What started as a case has become everything...

And with one wrong step, they could lose it all.

USA Today best-seller Kimberly Kincaid offers up a sizzling, full-length firefighter suspense. Enemies to lovers never burned so hot on their way to happily ever after.

Kellan made his way up Washington Boulevard, where he’d parked yesterday morning before shift. Funny how quiet the city could be before things like rush hour and regular workdays kicked in, all soft sunlight and clean storefronts. He slid in a breath of cool air, scanning the sidewalk and the two-lane thoroughfare where Station Seventeen was situated.

He saw the woman leaning against his ’68 Camaro from forty feet away.

Kellan’s pulse flared even though his footsteps never faltered. Long, denim-wrapped legs leading to lean muscles and lush, sexy curves. Loose, confident stance that spoke of both awareness and strength. Long, caramel-colored hair that she tossed away from her face as soon as she saw him coming, and God dammit, that was the second time this week he’d been blindsided by Isabella Moreno.

“What are you doing here?” he asked, wincing inwardly as the words crossed his lips. Not that he didn’t feel every inch of the attitude behind them, because after her fuck-up had put his sister’s life in danger three months ago, he so did. But slapping his emotions on his sleeve wasn’t on Kellan’s agenda, good, bad, or extremely pissed off. Of course, Isabella already knew he was chock full of the emotion behind door number three, anyway.

She pushed herself off the Camaro’s cherry red quarter panel, sliding one hand to her unnervingly voluptuous hip while the other remained wrapped around a cup of coffee. “Waiting for you.”

“I got that.” His tone left the what-for part of the question hanging between them, and Kellan had to hand it to her. Moreno wasn’t the type to mince words.

“I need a favor. I want you to walk me through the scene of Monday’s fire.”

Jesus, she had a sense of humor. Also, balls the size of Jupiter. “You want me to take you back to the scene of a fire that gutted a three-story house just to give you a play by play?”

She nodded, her brown eyes narrowing against the sunlight just starting to break past the buildings around them. “That about sums it up, yeah.”

“It’s a little early for you to be punching the clock, isn’t it?” he asked. Most people weren’t even halfway to the door just shy of oh-seven-hundred on a weekday morning.

Moreno? Not most people, apparently. “What can I say? I’m feeling ambitious.”

Kellan resisted the urge to launch a less-than-polite comment about her work ethic, albeit barely. “I already told you and Sinclair everything I know.”

“Okay.” Her shoulders rose and fell beneath her dark gray leather jacket, easy and smooth. “So humor me and walk me through it again anyway.”

His sixth sense took a jab at his gut, prompting him to give the question in his head a voice. “Is this part of the investigation?”

“Because you called it a favor, and you just answered my question with a question.”

Nope. No way was he buying this. Not even on her best day. “And I’m a firefighter who’s not interested in putting his ass in a sling just to humor you with an unsanctioned walk-through.”

The RFD might offer a little latitude on firefighters revisiting scenes—a fact Kellan would bet his left nut Moreno damn well knew—but just because he’d worked the job didn’t mean he had carte blanche to prance through the place like a fucking show pony now that the fire was out.

Not that a little thing like protocol seemed to bother Isabella in the least. “Your ass will be fine. I’ll take full responsibility.”

“I’m pretty sure I’ve heard that one from you before.”

The words catapulted out before Kellan could stop them. Moreno flinched, just slightly, but it was enough. “Look, I need to get back onto that scene,” she said. “Are you going to help me or not?”