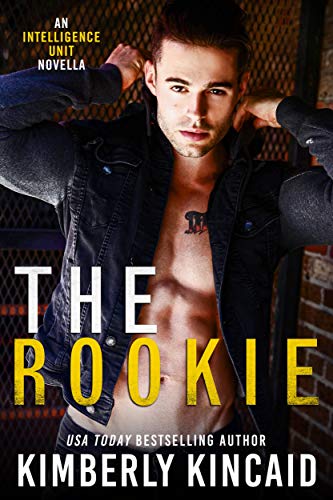 Police recruit Xander Matthews wants two things:
to help people
and to keep his dark and dangerous past
in his rear-view, where it belongs.
He never thought he'd see brash, beautiful A.D.A. Tara Kingston
after she tried to prosecute him two years ago.

Yet here she is, smack in the middle of a crime scene
and now they have to work together
to catch a killer.

Tara prides herself on being tough—
after all, she learned the hard way
how fleeting life can be.
But the closer she gets to Xander
the more she wants to open up and let him in.
The more she wants everything.

The stakes are high
and the passion is hot.
But Xander's secrets run deep
and now, their hearts and their lives
are on the line...

This is the first story in a brand-new, scorching hot romantic suspense series from Kimberly Kincaid. A shorter version of this story will appear in the Danger and Desire anthology from September 15-25, 2020. This is the extended version, containing bonus scenes and added content. It will be 99 cents for preorder and release week only (until October 13, 2020). Release day is October 6, 2020.

The Intelligence Unit series is a spinoff from Station Seventeen and Remington Medical. Xander first appears in DOWN DEEP. All of Kimberly's romances stand alone.

“I’m Tara Kingston, with the DA’s office. I’m here for a patient who was brought in via ambulance. Amour Pollard. Aimee,” she added, and the scrubs-clad man behind the desk nodded.

“The paramedics said to expect you. Dr. Riley is with the patient right now. You’ll have to wait out here.” He darted an apologetic glance at the waiting room. “But I’ll let her know you’re here. She’ll come find you as soon as she can.”

Tara tensed beside him in a way that said she was primed to argue, and Xander edged his way into her line of vision before he could stop himself. “Tara, she’s in the best hands. You don’t want to mess with that,” he said quietly. “Plus, we have to wait for someone from Intelligence to get here to work this case before we can do anything, anyway. It’s SOP, and we have to do this by the book.”

To his total surprise, she eked out a small, slow nod. Thanking the intake nurse, she stepped back with a frown. “I know you’re right. But…”

“The waiting sucks. I know.” Xander slapped back the memory of exactly how well-acquainted he was with that particular terror and gestured toward the chairs. “Do you want to sit down? It might be a while.”

“Okay.” Xander tried Door Number Two. “Maybe we should find a vending machine. Are you hungry?”

Tara shook her head, knocking a strand of hair loose from the already tousled twist pinned just behind her ear. “No, thank you. I just want to wait right here for Dr. Riley.”

She locked her fingers together and started to pace. Her shoes—a pair of classy black heels with slim straps around her ankles that did absolutely zip for Xander’s composure—clipped a steady rhythm over the linoleum, and after the third circuit of pacing/hand wringing, he realized he was going to have to stage an intervention, otherwise she was going to fry her own circuitry before Dr. Riley could get even close to an update.

He fell into step alongside her. “Interesting story. Like, thirty years ago, there was this cargo ship on its way from Hong Kong to the United States.”

“What?” Tara stopped short to stare at him, but Xander didn’t let go of his steady-as-she-goes expression.

“Cargo ship. Hong Kong to the U.S.,” he repeated. When she was too shocked to verbalize the WTF that was scribbled all over her pretty face, he continued. “On the route, the ship accidentally lost a shipping crate, like, smack in the middle of the Pacific Ocean. I bet you can’t guess what was in it.”

“Car parts.” A competitive spark lit her eyes, making her even prettier than usual.

Xander forced his shoulders into a haphazard shrug and his dick to stand down. “Nope.”

“Xander.” His name was all warning as it crossed Tara’s lips, and he had to cave.

The look on her face was priceless. “I’m sorry. Did you say—”

“Yup. Ducks. So, the shipping company figures they’re lost, right? I mean, the crate fell into the ocean.” He pantomimed a big splash with his hands. “But then these rubber ducks started popping up in all sorts of places.”

“Are you serious?” Tara asked, fully hooked on the story if her expression was anything to go by.

Annnd gotcha. “Scout’s honor,” he said, even though he was as far from a Boy Scout as a man could get. “Australia. Alaska. The shores of the Atlantic. They’ve even found a couple frozen in Arctic ice.”

“No way.” She huffed out a laugh. “That’s thousands of miles.”

“I know, right? But that’s the coolest part. Those accidental ducks ended up teaching marine researchers a ton about ocean currents. A few still pop up here and there to this day.”

“Oh, my God, that’s so cool,” Tara murmured. The ease on her face lasted for a beat, then one more before her chin whipped up, and ah, busted. “You did that on purpose, didn’t you?”

Xander slid on his poker face like it was his Sunday best. “I’m not sure what you mean.”

“You used that story to distract me so I’d relax.”

Her hands found the generous curve of her hips, and Xander wondered if the move was pure reflex. Focus. And not on grabbing her hips while fucking her senseless. “Uh,” Xander grunted, and what the hell was wrong with him? “Yeah, maybe. But you weren’t going to last five minutes pacing the floor like that, and I know you want to save your energy for Amour.”

Tara took a step toward him, her arms softening at her sides. “You’re a really nice guy, you know that?”

The urge to correct her was strong, but Xander bit it in half and said, “Just doing my job.”

“The standard answer when someone says ‘you’re a nice guy’ is usually ‘thank you’.”

The words carried none of her usual heat, filled instead with curiosity, and hell, Xander would take her ire a million times over the beautiful, wide-open look on her face right now. “Thank you.”

Another step, and now Tara was right in front of him, close enough to touch. “How come you don’t like being called a nice guy?”

His pulse flared, but that shit about old habits was real.

This time, he stepped toward her, cutting the distance between them to inches. “The standard answer when someone says ‘thank you’ is usually ‘you’re welcome’.”

“Oh,” Tara breathed. Her lips parted to release the sound as a sigh, and suddenly, there was nothing in the universe other than him, her, and the red-hot urge to claim her mouth. “You’re welcome, Xander.”