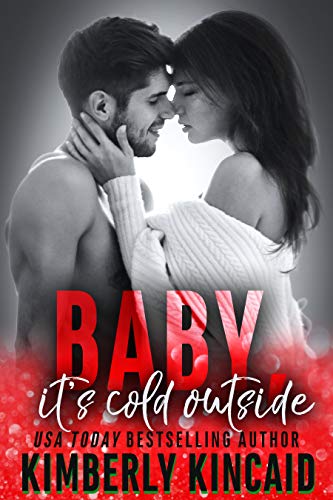 This is an extended version of the short story found in Holiday Ever After.
It contains several added scenes and bonus content.


He's cocky. He's arrogant. He's drop-dead sexy.
He drives her crazy
in every sense of the word.

Even worse, he's her boss. And now they're stuck together for the holidays.

Sofia Vasquez eats determination for breakfast.
She'll do anything to fulfill her dream—
and her father's dying wish—
of becoming a doctor.
She's not going to let anything stand in her way.

Especially not her ridiculous attraction
to Emmett Mallory,
a.k.a. Dr. Cocky.
Sofia's here to become a doctor, not play doctor.
No matter how much the sexy surgeon
turns her on.

Emmett shouldn't want his resident.
From her sharp tongue to her even sharper tenacity
she's like a walking, talking off limits sign.
But she needs his help to pass her boards
and he's got no plans for the holidays.
So what if they argue every time they're together?

So what if it makes him want her even more?

But as Christmas draws closer
and the passion between them grows hotter
Emmett and Sofia begin to realize they're not explosive because they don't mix.

They're explosive because they do.

From USA Today best-selling author Kimberly Kincaid comes a scorching hot romance featuring a cocky bad-boy hero and the headstrong heroine who's protective of the heart he wants to steal. This steamy holiday happily-ever-after contains sexy banter, cupcakes, and a complete love story. No cliffhangers, all hotness!

Emmett Mallory’s first thought was that surely, he was being recorded by a hidden camera for some sort of evil online prank. His second, which arrived a few seconds later as he realized that he and Sofia were, in fact, temporarily trapped in an elevator, was that fate must be in some kind of serious ha-ha, sucker mood to stick him in a busted elevator with the one woman who drove him crazy in both the bad way and the ohhhh-so-good way, all at once.

Sofia Vasquez was a study in extremes, and right now, she looked extremely unhappy.

“What do you mean, we’re stuck?” Her eyes had rounded like beautiful dark brown saucers, her smart, tart mouth falling open in some combination of denial and disbelief.

Quick to corral his wits—because, hey, he was an orthopedic surgeon with a specialty in trauma, and he’d definitely seen worse than a jammed-up elevator—Emmett slung on a smile and looked at the elevator panel, then the ceiling above them. “Well, we’re not moving, and the doors aren’t opening, so I’m guessing that means we can’t get out until someone fixes whatever’s wrong with this thing.”

“I got that part,” Vasquez bit out, and damn, even her frown was pretty. “What I meant was, we can’t be stuck.”

Do not mess with her, dude. She’s clearly rattled. Do not—“I’m pretty sure we can,” Emmett said, twirling a finger around the elevator’s not-large space, and okay, fine, so he was going to mess with her just a tiny bit. But come on! No one should be so serious all the time. “Because until further notice, it looks like neither one of us is leaving this elevator.”

Her shock morphed into something more akin to actual panic, and a thought occurred to him that hadn’t before. “You’re not claustrophobic, are you?”

“What? No,” she said, the worry that had crowded his chest receding as he watched her move to the panel, pressing the already illuminated button for the third floor once, then again. “Come on, come on.”

After the fifteenth time, she realized what he’d known before the first. “I don’t think that’s going to work.”

Vasquez glared over her shoulder. Yep, she was even pretty when she was mad.

Shit. He really needed stop thinking about how he’d been quietly yet ridiculously attracted to her for the past fifteen months. She was a resident. Granted, workplace relationships weren’t totally out of bounds at Remington Mem—hell, Parker and Charlie had just tied the knot, with Jonah and Natalie and Connor and Harlow not far behind, and they all worked here at the hospital. Of Emmett’s close friends, only Tess was the not-shacking-up-with-a-co-worker outlier. Still, he and Sofia did work together, and most of the time, for some reason he couldn’t explain, she seemed none too pleased with his company.

“There’s got to be something…” She trailed off, her expression brightening a beat later. “Aha! Here we go!”

She jabbed the red emergency button in the upper left corner of the panel, and after a two-second delay, a slightly staticky, definitely concerned voice filtered through the speaker.

“Hello? This is Bart, from maintenance. Is everyone okay?”

“Oh, thank God,” Vasquez murmured. Then, louder, “Hi, Bart. This is Dr. Sofia Vasquez. I’m here with Dr. Mallory. We seem to be stuck in the elevator. It’s not moving, and the doors aren’t opening. Can you get us on our way, please?”

“I’m afraid not. There seems to be a maintenance issue with that elevator car right now. It’s nothing dangerous,” Bart assured, although Vasquez’s expression suggested she thoroughly disagreed. Jeez, what was with her hating him so much? “But it might take a little while before we can get you moving. Are there any patients on board?”

Vasquez blinked at the speaker, as if the words hadn’t quite processed. “No, it’s just the two of us, but…”

Emmett took a deep breath. “We’ll be okay, Bart. Just do your thing as fast as you can? Dr. Vasquez and I have patients in the ED.”

“Dr. Langston is aware of the situation,” Bart said. “He said he’ll make sure you’re covered until we can get you out of there.”

Emmett turned toward Vasquez with just enough time to get sucker punched by her glare, which had tripled in intensity. “What?” he asked, his trademark calm slipping by a degree. “We’re stuck, Vasquez. We aren’t in any danger.” They’d gotten on at the ground floor and moved maybe ten feet up, for Chrissake. “Maintenance knows we’re in here, and we can communicate with them if we need to. We just have to wait it out.”

Crossing her arms over the front of her doctor’s coat-and-scrubs combo, she pressed her back against the wall opposite him. “Maybe we could climb through that access panel or something,” she said, her gaze moving upward.

Unable to help it, Emmett laughed out loud. “First of all, that panel is a good nine feet above the ground. Secondly, this isn’t an action movie. We’d have no clue what to do once we got up there, and I, for one, am not about to go all Mission Impossible to figure it out when we can just wait for maintenance to fix whatever’s wrong.”

“That could take hours,” she protested, still eyeing the panel in the ceiling. “I’m not waiting that long.”

“Why not?” Seriously, it was by far the smartest option. Not to mention the least insane.

“Because,” Vasquez repeated, pressing up to the toes of her clogs. “I can’t be stuck in here with you.”

She took a leap for the ceiling panel before he could get indignant, promptly missing it by a nautical mile and stumbling as her feet hit the floor.

He caught her by both elbows out of pure instinct. “Whoa!”

He’d had every intention of steadying her. Hell, most of the time, steady was his middle freaking name, and she’d been the one to go all leapfrog at the elevator ceiling while his feet had remained on the linoleum.

So why the hell did he suddenly feel so off-balance?