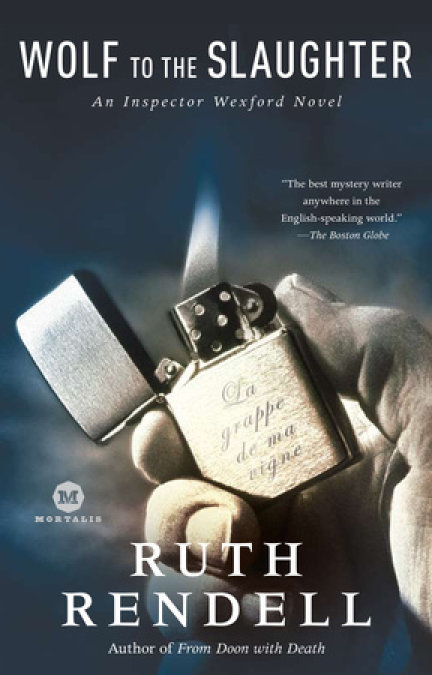 “[Rendell is] undoubtedly one of the best writers of English mysteries and chiller-killer plots.”—Los Angeles Times

It was better than a hotel, this anonymous room on a secluded side street of a small country town. No register to sign, no questions asked, and for five bucks a man could have three hours of undisturbed, illicit lovemaking.

Then one evening a man with a knife turned the love nest into a death chamber. The carpet was soaked with blood -- but where was the corpse?

Meanwhile, a beautiful, promiscuous woman is missing—along with the bundle of cash she'd had in her pocket. The truth behind it all will keep even veteran mystery fans guessing through the very last page.

Praise for Wolf to the Slaughter

“For readers who have almost given up on mysteries . . . Rendell may be just the woman to get them started again.”—Ellery Queen’s Mystery Magazine 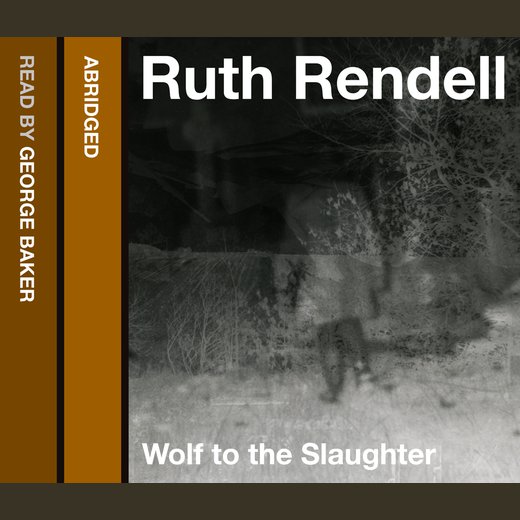 I think the Vessel, that with fugitive
Articulation answer’d, once did live,
And merry-make; and the cold Lip I kiss’d
How many kisses might it take—and give!

The Rubaiyat of Omar Khayyám

The police would possibly have thought so if they had stopped the car that was going too fast along the darkening road. The man and the girl would have had to get out and explain why they were carrying an offensive weapon. Explanation would have had to come from the man, for the girl could not have answered them. In the gathering dusk, watching the thin rain trickle down the glass, she thought that the raincoats they wore looked like a disguise, gangster garments, and the knife unsheathed for use.

“Why do you carry it?’ she asked, speaking for the first time since they had left Kingsmarkham and its street lamps drowned in drizzle. ‘You could get into trouble having a knife like that.’ Her voice was nervous, although the nerves were not for the knife.

He pressed the switch that worked the windscreen wipers. ‘Suppose the old girl turned funny?’ he said. ‘Suppose she changed her mind? I might have to put the fear of God into her.’ And he drew his fingernail along the flat of the blade.

‘I don’t like it much,’ the girl said, and again she did not only mean the knife.

‘Maybe you’d rather have stayed at home with him liable to come in at any minute? It’s a miracle to me you ever got around to using his car.’

Instead of answering him, she said carefully, ‘I mustn’t see this woman, this Ruby. I’ll sit in the car out of the way while you go to the door.’

‘That’s right, and she’ll nip out the back. I got the whole thing arranged on Saturday.”

Stowerton was seen first as an orange blur, a cluster of lights swimming through the mist. They came into the town centre where the shops were closed but the launderette still open. Wives who worked by day sat in front of the machines, watching their washing spin round inside the portholes, their faces greenish, tired in the harsh white light. On the corner at the crossroads, Cawthorne’s garage was in darkness, but the Victorian house behind it brightly illuminated and from its open front door came the sound of dance music. Listening to this music, the girl gave a soft giggle. She whispered to her companion, but because she had only said something about the Cawthornes having a party, nothing about their own destination and their purpose, he merely nodded indifferently and said:

She caught sight of the church clock as they turned into a side street. ‘Nearly eight.’

‘Perfect,’ he said. He made a face in the direction of the lights and the music and raised two fingers in a derisive gesture. ‘That to old Cawthorne,’ he said. ‘I reckon he’d like to be in my shoes now.”

The streets were grey and rain-washed and they all looked the same. Stunted trees grew from the pavements at four-yard intervals and their struggling roots had made cracks in the tarmac. The squat houses, unbroken rows and rows of them, were all garageless and there was a car stuck half-way on the pavement outside nearly every one.

‘Here we are, Charteris Road. It’s number eight-two, the one on the corner. Good, there’s a light in the front room. I thought she might have done the dirty on us, got cold feet or something and gone out.’ He put the knife into his pocket and the girl watched the blade flick back to bury itself in the shaft. ‘I shouldn’t have liked that,’ he said.

The girl said quietly, but with an undercurrent of excitement in her voice, ‘Nor should I now.”

The rain had brought night early and it was dark in the car, too dark to see faces. Their hands met as together they fumbled to make the little gold cigarette lighter work. In its flame she saw his dark features glow and she caught her breath.

‘You’re lovely,’ he said. ‘God, you’re beautiful.’ He touched her throat, moving his fingers into the hollow between the horizontal bones. They sat for a moment looking at each other, the flame making soft candlelight shadows on their faces. Then he snapped the lighter closed and pushed open the car door. She twisted the gold cube in her hands, straining her eyes to read its inscription: For Ann who lights my life.

A street lamp on the corner made a bright pool from the kerb to the gate. He crossed it and it threw his shadow black and sharp on this evening of blurred outlines. The house he had come to was poor and mean, its front garden too small to have a lawn. There was just an earth plot, an area ringed with stones, like a grave.

On the step he stood a little to the left of the front door so that the woman who would come to answer his knock should not see more than she need, should not, for instance, see the tail of the green car, wet and glistening in the lamplight. He waited impatiently, tapping his feet. Raindrops hung from the window sills like chains of glass beads.

When he heard sounds of movement from within, he stood stiffly and cleared his throat. The footsteps were followed by sudden illumination of the single diamond pane in the door. Then, as the latch clicked, that pane became a frame for a wrinkled painted face, businesslike but apprehensive, crowned with ginger hair. He thrust his hands into his pockets, feeling a smooth polished hilt in the right-hand one, and willing things to go right for him.

When things went wrong, hideously wrong, he had a terrible sense of fate, of inevitability. It would have happened sometime, sooner or later, this way or the other. They got into their coats somehow and he tried to staunch the blood with his scarf.

‘A doctor,’ she kept moaning, ‘a doctor or the hospital.’ He didn’t want that, not if it could be avoided. The knife was back in his pocket and all he wanted was air and to feel the rain on his face and to get to the car.

The terror of death was on both their faces and he could not bear to meet her eyes, staring and red as if the blood were reflected in the pupils. Down the path, they held on to each other, staggering past the little bit of earth like a grave, drunk with panic. He got the car door open and she fell across the seat.

“Get up,’ he said. ‘Get a grip on yourself. We’ve got to get out of here,’ but his voice sounded as far off as death had once seemed. The car jerked and shuddered up the road. Her hands were shaking and her breath rattled.

‘You’ll be all right. It was nothing—that tiny blade!’

Too late. A blueprint for last words. Music came out from Cawthorne’s house as the car went past the garage, not a dirge but music for dancing. The front door stood open and a great band of yellow light fell across the puddles. The car went on past the shops. Beyond the cottages the street lamps came to an end. It had stopped raining but the countryside was shrouded in vapour. The road was a tunnel between trees from which the water dripped silently, a huge wet mouth that sucked the car along its slippery tongue.

Across the band of light and skirting the puddles, party guests came and went. Music met them, hot dry music in sharp contrast to the night. Presently a young man came out with a glass in his hand. He was gay and full of joie de vivre but he had already exhausted the possibilities of this party. The drunk he spoke to in a parked car ignored him. He finished his drink and put the glass down on top of a diesel pump. There was no one to talk to except a sharp-faced old girl, going home, he guessed, because the pubs were shutting. He hailed her, declaiming loudly:

“Ah, make the most of what we yet may spend, Before we too into the dust descend!’

She grinned at him. ‘That’s right, dear,’ she said. ‘You enjoy yourself.’

He was hardly in a fit state to drive. Not at the moment. Besides, to remove his own car would necessitate the removal of six others whose owners were all inside enjoying themselves. So he began to walk, buoyantly and in the faint hope of meeting someone rather special.

It had come on to rain again. He liked the cool feeling of the drops on his hot face. The road to Kingsmarkham yawned at him. He walked along it happily, not at all tired. Far away in the distance, in the throat as it were of this deep wet mouth, he could see the lights of a stationary car.

‘What lamp,’ he said aloud, ‘had destiny to guide Her little children stumbling in the dark?”