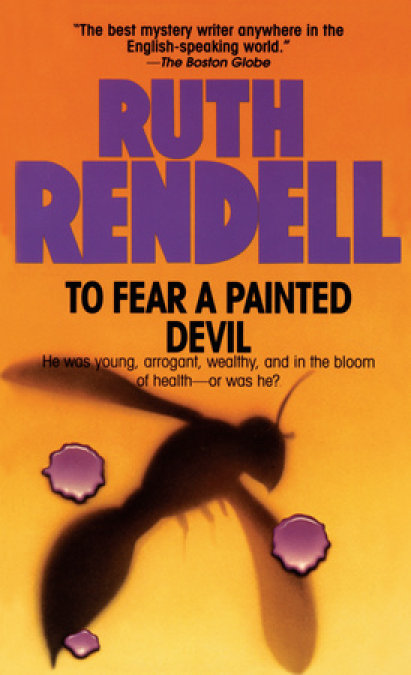 He was young, arrogant, wealthy and in the bloom of health—or was he?

“Undoubtedly one of the best writers of English mysteries and chiller-killer plots.”—The Los Angeles Times

Like any small community, Linchester has its intrigues: love affairs, money problems, unhappy marriages. But the gossip is elevated to new heights when young Patrick Selby dies on the very night of his beautiful wife’s birthday party.

The whole neighborhood was there, witness to the horrible attack of wasp stings Patrick suffered at the end of the evening. But did Patrick die of a wasp sting? Dr. Greenleaf thinks not. Heart failure, more likely.

Still, Greenleaf isn’t at peace about his death. After all, everyone in Linchester hated Patrick. With the help of a certain naturalist, Dr. Greenleaf begins to think about murder. . . .

He was nine. It was his first morning in England and he began to wonder if all English houses were like this one, large yet with small rooms, full of things that no one could use: armless statues, vases with lids to them, curtains as immovably draped as one of his mother’s evening gowns.

They had arrived the night before and he had passed through the hall wrapped in a blanket and carried in his father’s arms. He remembered only the great front door, a heavy wooden door with a picture of a tree on it in coloured glass. They had left him to sleep as long as he would and someone had brought breakfast for him on a tray. Now as he descended the stairs, crossing the half-landing which a bronze soldier guarded with his lance, he saw the hall below him and his steps faltered.

It was a fine morning but the room looked as rooms do at twilight, dim and still. Instead of being papered the walls were hung with embroideries stretched on frames, and between them curtains that covered—what? Windows? Doors? It seemed to him that they covered things people were not supposed to see. There was a single mirror with a wooden frame and this frame, of carved and polished red wood, looked as if it had grown branches of its own, for strips of wood shaped into leaves and twigs twined across the glass.

Within this mirror he could see not himself but an open door reflected and beyond it the beginning of the garden. The door stood wide and he went through it, seeking the garden where he knew the sun must be shining. Then he saw the picture. He stood quite still and he stared at it.

It was a painting of a lady in an old-fashioned dress of striped silk, bright blue and gold, with a little gold cap on her head. She was holding a silver plate and in the plate was the head of a man.

He knew it must be a very good painting because the artist had made it look so real. Nothing was left out, not even the blood in the plate and the white tube things in the man’s neck where it had been cut from his body.

The lady wasn’t looking at the thing in the plate but at him. She was smiling and there was a strange expression on her face, dreamy, triumphant, replete. He had never seen such a look in anyone’s eyes before but suddenly he knew with an intuition that had in it something of an a priori knowledge, that grown-ups sometimes looked at each other like that and that they did so out of the sight of children.

He tore his eyes from the picture and put his hand up to his mouth to stop them hearing his scream. Then he rushed blindly away, making for the glass place that separated this room from the garden.

He stumbled at the step and put out his hand to save himself. It touched something cool and soft but only for a moment. The coolness and softness were succeeded by a terrible burning pain that seemed to smite him exactly like the shock he had had from his mother’s electric iron.

‘Prussic acid?’ The chemist was startled. He had been a member of the Pharmaceutical Society for ten years and this was the first time anyone had made such a request to him. Not that he would grant it. He was a responsible citizen, almost—in his own estimation—a doctor. ‘Cyanide of Potassium?’ He looked severely at the small man in the suit that was too dark and too thick for a hot day. ‘What d’you want that for?’

Edward Carnaby, for his part, was affronted. Mr. Waller was only a chemist, a pharmacist really, not a proper chemist who worked in a laboratory. Everyone knew that doctors poked their noses into one’s affairs, trying to find out things that were no business of theirs, but not chemists. You asked for what you wanted—razor blades or shaving cream or a camera film—and the chemist gave it to you. He wrapped it up and you paid for it. When all was said and done, Waller was only a shopkeeper.

‘I want it for killing wasps. I’ve got a wasp nest on the wall of my house under the roof.’

He fidgeted uneasily under Waller’s accusing gaze. The fan on the ceiling, instead of cooling the shop, was only blowing the hot air about.

‘May I have your name, please?”

“What for? I don’t have to have a prescription for it, do I?’

Waller ignored the sarcasm. Responsible professional men must not allow themselves to be ruffled by cheap cracks.

‘What gave you the idea of cyanide?’ As he spoke the curtain of coloured plastic strips that hung across the entrance to the dispensary parted and Linda Gaveston came out in her pink overall. Her appearance angered Edward, partly because she looked so cool, partly because he felt that a girl whose parents lived on Linchester had no business to be working as an assistant in a chemist’s shop. She smiled at him vaguely. Edward snapped:

‘If you must know, I read about it in a gardening book.’

“Rather an old-fashioned book, surely? These days we get rid of wasps by using a reliable vespicide.’ He paused, allowing the unfamiliar word to sink in. ‘One that is harmless to warm-blooded …’

‘All right,’ Edward interrupted him. He wasn’t going to make a scene in front of one of those snooty Gavestons. ‘Why didn’t you say so before? I’ll take it. What’s it called?’

‘Vesprid.’ Waller shot him a last baleful look and turned round, but the girl—showing off, Edward thought—was already holding the tin towards him. ‘Two and eleven.’

‘The instructions are enclosed.’

Linda Gaveston lifted her shoulders slightly and slipped between the waving strips in the way she had seen a night club girl insinuate herself through a bead curtain on television.

‘There goes a nut,’ she said to Waller when Edward had gone. ‘He lives near us.’

“Really?’ Like all the shopkeepers in Chantflower village Waller had a great respect for Linchester. Money flowed from it as from a spring of sweet water. ‘Not quite what one has been led to expect.’ He watched Edward get into his salesman’s car, its back seat full of cardboard boxes. ‘It takes all sorts,’ he said.

On that hot afternoon Freda Carnaby was the only Linchester housewife who was really working and she was not a wife at all. She was cleaning windows in the single living room of Edward’s chalet partly because it was a good excuse for watching the cars coming round The Circle. Linchester business men kept short hours and the man she was looking for might be early. He would wave, even perhaps stop and renew his promise to see her later, and he would notice afresh how efficient she was, how womanly. Moreover he would see that she could look smart and pretty not only in the evenings but also with a wash leather in her hand.

Considering who she was looking for it was ironic that the first car to appear was Tamsin Selby’s. Even if you didn’t see the number plate (SIN 1-A) you would know it was Tamsin’s Mini because, although it was new, its black body and white roof were already marked with raindrops and with dust, and the back seat was full of leaves and twigs, rubbish from the fields. Freda pursed her lips in happy disapproval. If you had money and you bought nice things (what that monogram of a number plate must have cost!) you ought to take care of them.

Dr. Greenleaf’s car followed fast on her tail. It was time, Freda considered, that he bought a new one. A doctor, she had read in one of her magazines, was nowadays the most respected member of a community, and therefore had appearances to keep up. She smiled and bobbed her head. She thought the doctor’s kindly grin meant he was grateful to her for being so healthy and not taking up his surgery time.

By the time Joan Smith-King arrived with her shooting brake full of the Linchester children she had fetched from school, Freda had finished the window.

‘All delivered in plain vans,’ Joan said cheerfully, ‘Den says I ought to have a C licence.”

“Can I go to tea with Peter?’ Cheryl called. ‘Can I, Auntie Free? Please.’

‘If you’re sure she’s no trouble,’ Freda said. Cheryl might be only a salesman’s daughter, but she had nice manners. She, Freda, had seen to that. But going out to tea was a nuisance. Now Cheryl would come rushing in at seven just when Freda wanted to be relaxed and ready with coffee cups on the best traycloth, paper napkins and sherry in a decanter.

‘Ghastly these wasps.’ Joan looked up at the chalet roof where the wasps were dribbling out from under the eaves. ‘Tamsin said Patrick got a nasty sting on his hand.”

“Did he?’ Freda took her eyes from Joan’s face and stared innocently at the hedge. ‘Don’t be late,’ she said to Cheryl. Joan moved off, one hand on her wheel, the other pulling Jeremy off Peter, shoving her daughter Susan into Cheryl’s lap. The baby in its carry-cot on the front seat began to cry. Freda went round the back and into the spotless kitchen.

She was re-doing her face from the little cache of cosmetics she kept in a drawer when she heard Edward’s car draw up on the drive. The front door slammed.

She bustled into the lounge. Edward was already at the record-player, starting up The Hall of the Mountain King.

‘You might have shut the gates,’ she said from the window, but she didn’t press the point. A wife could expect small services, not a sister. A sister was only a housekeeper, a nanny to Edward’s motherless daughter. Still … she cheered up. A couple of years and she might have a child of her own.

‘How long till tea?’

‘Five thirty sharp,’ said Freda ‘I’m sure I never keep you waiting for your meals, Ted.’