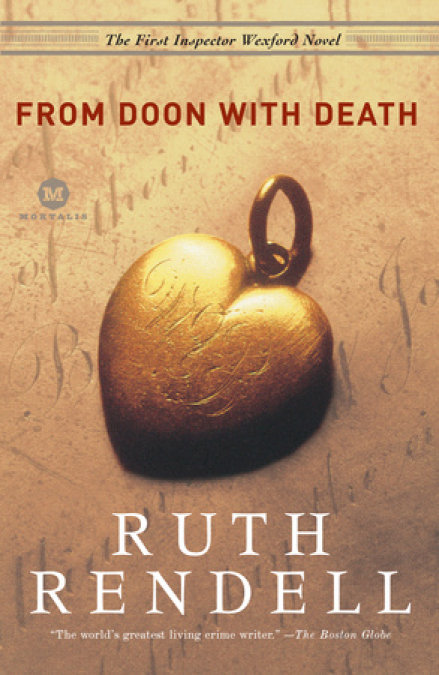 Dazzling psychological suspense. Razor-sharp dialogue. Plots that catch and hold like a noose. These are the hallmarks of crime legend Ruth Rendell, “the best mystery writer in the English-speaking world” (Time magazine). From Doon with Death, now in a striking new paperback edition, is her classic debut novel—and the book that introduced one of the most popular sleuths of the twentieth century.

There is nothing extraordinary about Margaret Parsons, a timid housewife in the quiet town of Kingsmarkham, a woman devoted to her garden, her kitchen, her husband. Except that Margaret Parsons is dead, brutally strangled, her body abandoned in the nearby woods.

Who would kill someone with nothing to hide? Inspector Wexford, the formidable chief of police, feels baffled -- until he discovers Margaret's dark secret: a trove of rare books, each volume breathlessly inscribed by a passionate lover identified only as Doon. As Wexford delves deeper into both Mrs. Parsons’ past and the wary community circling round her memory like wolves, the case builds with relentless momentum to a surprise finale as clever as it is blindsiding.

In From Doon with Death, Ruth Rendell instantly mastered the form that would become synonymous with her name. Chilling, richly characterized, and ingeniously constructed, this is psychological suspense at its very finest.

Praise for From Doon with Death

“One of the most remarkable novelists of her generation.”—People

“She has transcended her genre by her remarkable imaginative power to explore and illuminate the dark corners of the human psyche.”—P.D. James

Call once yet, In a voice that she will know, “Margaret, Margaret!”
--Matthew Arnold, The Forsaken Merman

“I think you’re getting things a bit out of proportion, Mr. Parsons,” Burden said. He was tired and he’d been going to take his wife to the pictures. Besides, the first things he’d noticed when Parsons brought him into the room were the books in the rack by the fireplace. The titles were enough to give the most level-headed man the jitters, quite enough to make a man anxious where no ground for anxiety existed: Palmer the Poisoner, The Trial of Madeleine Smith, Three Drowned Brides, Famous Trials, Notable British Trials.

“Don’t you think your reading has been preying on your mind?”

“I’m interested in crime,” Parsons said. “It’s a hobby of mine.”

“I can see that.” Burden wasn’t going to sit down if he could avoid it. “Look, you can’t say your wife’s actually missing. You’ve been home one and a half hours and she isn’t here. That’s all. She’s probably gone to the pictures. As a matter of fact I’m on my way there now with my wife. I expect we’ll meet her coming out.”

“Margaret wouldn’t do that, Mr. Burden. I know her and you don’t. We’ve been married nearly six years and in all that time I’ve never come home to an empty house.”

“I’ll tell you what I’ll do. I’ll drop in on my way back. But you can bet your bottom dollar she’ll be home by then.” He started moving toward the door. “Look, get on to the station if you like. It won’t do any harm.”

And being off duty, Burden thought. If I was a doctor instead of a policeman I’d be able to have private patients on the side. I bet he wouldn’t be so keen on my services if there was any question of a fee.

Sitting in the half-empty dark cinema he thought: Well, it is funny. Normal ordinary wives as conventional as Mrs. Parsons, wives who always have a meal ready for their husbands on the dot of six, don’t suddenly go off without leaving a note.

“I thought you said this was a good film,” he whispered to his wife.

“Well, the critics liked it.”

Another man, that could be it. But Mrs. Parsons? Or it could be an accident. He’d been a bit remiss not getting Parsons to phone the station straight away.

“I wish I’d married that reporter who was so keen on me.”

“You must be joking,” Burden said. “He’d have stayed out all night putting the paper to bed. Or the editor’s secretary.” He charged up Tabard Road, then made himself stroll when he got to the Victorian house where Parsons lived. It was all in darkness, the curtains in the big bay downstairs undrawn. The step was whitened, the brass kerb above it polished. Mrs. Parsons must have been a house-proud woman. Must have been? Why not, still was?

Parsons opened the door before he had a chance to knock. He still looked tidy, neatly dressed in an oldish suit, his tie knotted tight. But his face was greenish gray. It reminded Burden of a drowned face he had once seen on a mortuary slab. They had put the glasses back on the spongy nose to help the girl who had come to identify him.

“She hasn’t come back,” he said. His voice sounded as if he had a cold coming. But it was probably only fear.

“I keep thinking what could have happened to her. It’s so open round here. I suppose it would be, being country.”

“It’s those books you read,” Burden said. “It’s not healthy.” He looked again at the shiny paper covers. On the spine of one was a jumble of guns and knives against a blood-red background. “Not for a layman,” he said. “Can I use your phone?”

“I’ll get on to the station. There might be something from the hospitals.”

The front room looked as if nobody ever sat in it. With some dismay he noted its polished shabbiness. So far he hadn’t seen a stick of furniture that looked less than fifty years old. Burden went into all kinds of houses and he knew antique furniture when he saw it. But this wasn’t antique and nobody could have chosen it because it was beautiful or rare. It was just old. Old enough to be cheap, Burden thought, and at the same time young enough to be expensive. The kettle whistled and he heard Parsons fumbling with china in the kitchen. A cup crashed on the floor. It sounded as if they had kept the old concrete floor. It was enough to give anyone the creeps, he thought again, sitting in these high-ceilinged rooms, hearing unexplained inexplicable creaks from the stairs and the cupboard, reading about poison and hangings and blood.

“I’ve reported your wife as missing,” he said to Parsons. “There’s nothing from the hospitals.”

Parsons turned on the light in the back room and Burden followed him in. It must have a weak bulb under the parchment lampshade that hung from the center of the ceiling. About sixty watts, he thought. The shade forced all the light down, leaving the ceiling, with its plaster decorations of bulbous fruit, dark and in the corners blotched with deeper shadow. Parsons put the cups down on the sideboard, a vast mahogany thing more like a fantastic wooden house than a piece of furniture, with its tiers and galleries and jutting beaded shelves. Burden sat down in a chair with wooden arms and seat of brown corduroy. The lino struck cold through the thick soles of his shoes.

“Have you any idea at all where your wife could have gone?”

“I’ve been trying to think. I’ve been racking my brains. I can’t think of anywhere.”

“What about her friends? Her mother?”

“Her mother’s dead. We haven’t got any friends here. We only came here six months ago.”

Burden stirred his tea. Outside it had been close, humid. Here in this thick-walled dark place, he supposed, it must always feel like winter.

“Look,” he said, “I don’t like to say this, but somebody’s bound to ask you. It might as well be me. Could she have gone out with some man? I’m sorry, but I had to ask.”

“Of course you had to ask. I know, it’s all in here.” He tapped the bookcase. “Just routine inquiries, isn’t it? But you’re wrong. Not Margaret. It’s laughable.” He paused, not laughing. “Margaret’s a good woman. She’s a lay preacher at the Wesleyan place down the road.”

No point in pursuing it, Burden thought. Others would ask him, probe his private life whether he liked it or not, if she still hadn’t got home when the last train came in and the last bus had rolled into Kingsmarkham garage.

“I suppose you’ve looked all over the house?” he asked. He had driven down this road twice a day for a year but he couldn’t remember whether the house he was sitting in had two floors or three. His policeman’s brain tried to reassemble the retinal photograph of his policeman’s eye. A bay window at the bottom, two flat sash windows about it and—yes, two smaller ones above that under the slated eyelids of the roof. An ugly house, he thought, ugly and forbidding.

“I looked in the bedrooms,” Parsons said. He stopped pacing and hope colored his cheeks. Fear whitened them again as he said: “You think she might be up in the attics? Fainted or something?”

She would hardly still be there if she’d only fainted, Burden thought. A brain hemorrhage, yes, or some sort of accident. “Obviously we ought to look,” he said. “I took it for granted you’d looked.”

“I called out. We hardly ever go up there. The rooms aren’t used.”