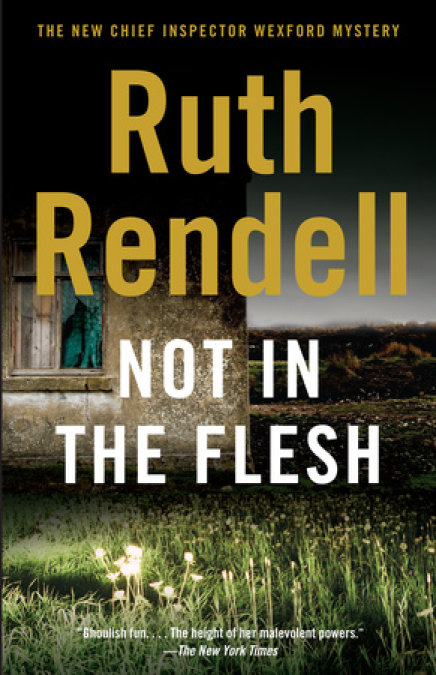 A new Chief Inspector Wexford mystery from the author who Time magazine has called "the best mystery writer in the English-speaking world."

When the truffle-hunting dog starts to dig furiously, his master's first reaction is delight at the size of the clump the dog has unearthed: at the going rate, this one truffle might be worth several hundred pounds. Then the dirt falls away to reveal not a precious mushroom but the bones and tendons of what is clearly a human hand.

In Not in the Flesh, Chief Inspector Wexford tries to piece together events that took place eleven years earlier, a time when someone was secretly interred in a secluded patch of English countryside. Now Wexford and his team will need to interrogate everyone who lives nearby to see if they can turn up a match for the dead man among the eighty-five people in this part of England who have disappeared over the past decade. Then, when a second body is discovered nearby, Wexford experiences a feeling that's become a rarity for the veteran policeman: surprise.

As Wexford painstakingly moves to resolve these multiple mysteries, long-buried secrets are brought to daylight, and Ruth Rendell once again proves why she has been hailed as our greatest living mystery writer.


From the Hardcover edition. 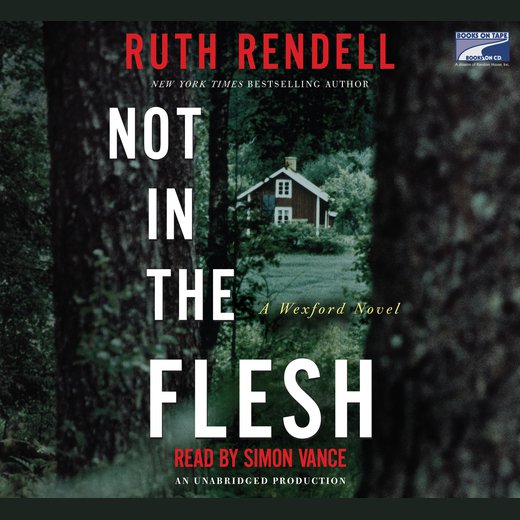 Tom Belbury died in May and now that summer was over his brother missed him more than ever. Neither of them had married, so there was no widow and no children, only the dog, Honey. Jim took Honey to live with him; he had always liked her and it was what Tom had wanted. When he knew he hadn’t long to live he worried a lot about Honey, what would happen to her after he was gone, and though Jim assured him repeatedly that he would take her, Tom said it again and again.

“Haven’t I promised over and over?” Jim asked. “You want me to put it in writing and get it witnessed? I will if that’s what you want.”

Tom’s trust hadn’t been misplaced. Jim lived in the cottage that had been the brothers’ parents’ home and there Honey went to live with him. She was no beauty, owing her ancestry to an apparent mix of spaniel, basset hound, and Jack Russell. Tom used to say she looked like a corgi and everyone knew corgis were the Queen’s dogs, having so to speak the royal seal of approval, but Jim couldn’t see it. Nevertheless, he had grown attached to Honey. Apart from fidelity and affection, she had one great virtue. She was a truffle dog.

Every September, at the beginning of the month, Tom and Honey used to go into one patch of woodland or another in the neighborhood of Flagford and hunt for truffles. A lot of people scoffed. They said truffles couldn’t be found in Britain, only in France and Italy, but there was no doubt Honey found them, was rewarded with a lump of meat, and Tom sold the truffles to a famous London restaurant for £200 a pound.

Jim disliked the taste but he liked the idea of £200 and pos- sibly more. He had never been truffle-hunting with Tom but he knew how it was done. This was why a mild and sunny morning in late September found him and Honey in what their neighbors called the posh part of Flagford where Flagford Hall faced Athelstan House across Pump Lane, each amid extensive grounds. They had no interest in these houses or their occupants. They were heading for Old Grimble’s Field that filled the corner between the gardens of Athelstan House and two identical detached houses called Oak Lodge and Marshmead.

Like the Holy Roman Empire, which Gibbon said was neither holy, Roman, nor an empire, this open space wasn’t a field, nor was Grimble particularly old or really called Grimble. It was an overgrown piece of land, about an acre of what estate agents describe as a corner plot. Due to years of inattention, saplings had grown into trees, shrubs into bushes, roses and privet and dogwood into hedges, and trees had doubled in size. Somewhere in the middle of this burgeoning woodland stood a semiderelict bungalow that had belonged to Grimble’s father, its windows boarded up, its roof slowly shedding its tiles. Tom Belbury had been there truffle- hunting with Honey the year before and pronounced it rich in members of the genus Tuber.

Because Tom had carried the rewards for Honey unwrapped in the breast pocket of his leather jacket, he usually smelled of meat that was slightly “off.” Jim hadn’t much liked it at the time, but now he recalled it with affection. How pleased dear old Tom would be to see him and Honey heading for Old Grimble’s Field in close companionship, following his old pursuit. Perhaps he could see, Jim thought sentimentally, and imagined him looking down from whatever truffle wood in the sky he found himself in.

Honey was the director of operations. Tom used to claim that she was drawn to a particular spot by the presence of truffle flies hovering around the base of a tree, and now she led Jim to a mature tree (a sycamore, he thought it was) where he could see the flies himself.

The irregular warty lump, about the size of a tennis ball, which Honey unearthed, she willingly relinquished in exchange for the cube of sirloin steak Jim took out of a plastic zipper-lock bag he had brought with him.

“This old fungus must weigh a good half-pound,” he said aloud. “Keep on with the good work, Honey.”

Honey kept on. The truffle flies annoyed her and she snapped at the swarms, scattering them and snuffling toward where they had been densest. There she began digging again, fetched out of the rich leaf mold first a much smaller truffle, then one about the size of a large potato and was rewarded once more with pieces of sirloin.

“There’s a lot more flies buzzing about over there,” Jim said, pointing to a biggish beech tree which looked a hundred years old. “How about moving on?”

Honey had no intention of moving on. So might a diamond prospector refuse to abandon the lode where gems worth a fortune had already come to light, until he was sure the seam had been exhausted. Honey sniffed, dug, slapped at the flies with her paws, dug again. No more truffles were foraged and the object that she had unearthed was of no interest to her. It lay exposed on the chestnut-colored soil, white, fanlike, unmistakably what it was: a human hand.

Or, rather, the bones of a human hand, flesh, skin, veins, tendons all gone.

“Oh, my lord, girl,” said Jim Belbury, “whatever have you gone and found?”

As if she understood, Honey stopped digging, sat down, and put her head on one side. Jim patted her. He put the three truffles in the plastic bag he had brought with him for that purpose, placed the bag inside his backpack, and removed from it his mobile phone. Jim might be an old countryman, once an agricultural laborer and living in a cottage with no proper bathroom and no main drainage, but still he would no more have gone out without his mobile than would his fifteen-year-old great-nephew. Unaware of the number of Kingsmarkham police station, he dialed Information.