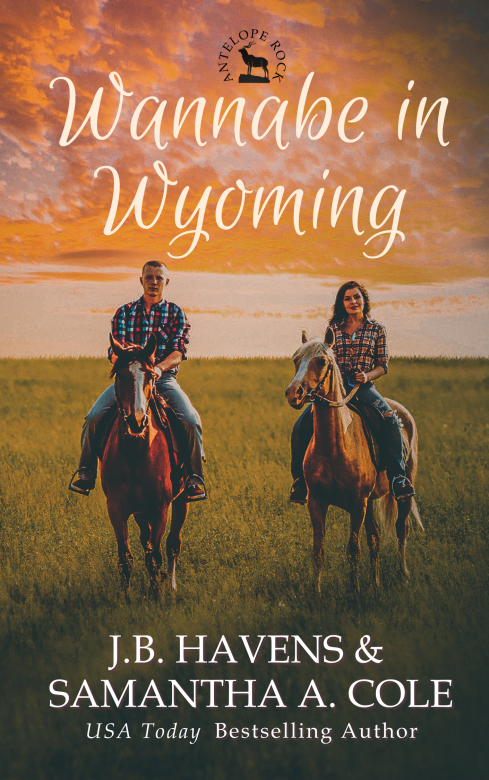 Samantha A. Cole
Follow
J.B. Havens
Follow
A tattooed chick from Philadelphia knows nothing about being a rancher. But that's about about to change!
Genres: Small Town & RuralContemporary RomanceMilitary RomanceSmall-town RomanceWestern Romance
Buy now
Available in:

Starting with a clean slate is not an easy task for anybody. Wannabe in Wyoming by J.B. Havens and Samantha A. Cole features Willow Crawford facing the opportunity to start a new life. Willow has inherited a cattle ranch in Antelope Rock, Wyoming from her father, Jason Hillcrest. She doesn't feel sad about her father's death as she has never met him, and she never spoke of him. Willow chooses to leave Philadelphia to get away from ex-husband Andrew Phelps and start over in a new place. When she arrives, she meets Jeremiah Urban, her

Wannabe in Wyoming is book one of the Antelope Rock series by two great storytellers, Samantha A. Cole and J. B. Havens, a compelling contemporary romance with unforgettable characters. Willow Crawford is a divorced woman who never knew her father. When her father's lawyer contacts her to tell her of his death, she also learns that she is the only heir to his ranch in Wyoming. She is excited to start a new life, but she knows little about ranching. When she sends out the letter addressed to Any Soldier from Wannabe Rancher, she is

Willow Crawford finally knows the identity of her father after thirty years of him being missing from her life. Unfortunately, he died of cancer, and she was left a small cattle ranch in Wyoming as his sole heir. Due to getting divorced and losing her mother a few years ago, Willow feels lonely and decides to start afresh in Wyoming. Eventually, she makes some new friends--one of which is the soldier she writes to through Any Soldier: Nathan. Nathan, who doesn't have any relations left, finds himself looking forward to Willow's

What does a tattooed chick from Philadelphia know about being a rancher? Absolutely nothing. But that's about to change.Willow Crawford never knew her father's identity until she hears from his lawyer, advising her of his death. As the sole heir to his ranch in Wyoming, she has the chance to start anew following her divorce.After losing his family in a devastating accident, mail call no longer brings a smile to Staff Sergeant Nathan Casey's face, knowing his name won't be shouted. But when he receives a letter addressed to Any Soldier, signed by Wannabe Rancher, he finds himself captivated by the fascinating and beautiful woman who'd written it.As her unexpected fondness for small-town life and a certain pen pal grows, Willow discovers more about herself, her family, and her legacy. Will the attraction she develops for Nathan, through his letters and phone calls, still exist and intensify when they finally meet? Or will she risk her heart, only to have history repeat itself and deny Willow her soul mate?

Hi, my name is Willow, and I wanted to take a moment to thank you for your service. It’s very much appreciated. It must be hard on you being away from your family and friends for long periods of time, and I hope this letter brightens your day.

I’m probably not supposed to ask where you’re stationed or deployed, so I won’t. I’ll just assume you’re somewhere on the other side of the world and pray you’re safe.

I guess I should tell you a little about myself. I’m thirty-three years old and originally from Philadelphia, where I’d lived my entire life until three weeks ago. That’s when I found out I’d inherited a ranch in Wyoming, of all places. Talk about a culture shock. This little podunk town has a population of just under 1000 people, and everyone seems to know everyone else. I probably had that many people living within a two-block radius of me back in Philly, and no one knew who any of their neighbors were beyond nodding hello as they passed each other on the street.

I’ve spent the last few weeks doing an overhaul of the house here—it really needed it. I’d been hoping all it would need was a fresh coat of paint, but that turned out to be the least of my worries. The front porch needed major work—all new steps and most of the boards needed to be replaced. Thankfully, the supports were in good shape, so the whole thing didn’t need to be torn down. I even managed to save the old porch swing, sanding and refinishing it. I think I’ll rehang on the side porch though—it faces west—and get another one for the back porch. The painters come in a few days to re-paint the outside of the house. I picked a light green color—I think it’ll look nice against the blue sky.

I also tackled the kitchen and two bathrooms and had a plumber and an electrician come in and update what needed to be. While there is still a lot to do in the three rooms, at least I can now say every surface has been bleached and disinfected, the water is clean, and the plugs are updated for the new appliances I ordered. Now I’m moving onto the rest of the house. Every room needs, at the very least, to be painted and new furniture and rugs.

With the help of some local guys, I got rid of the old, very outdated furniture (think of the 1970s if you need a visual), junk that was lying around, and anything else I didn’t want to keep. There are a bunch of boxes and trunks left, mostly filled with papers and stuff, but I put them in the attic until I have more time to devote to going through them. Thank goodness I also now have satellite internet and TV access—it was really quiet here without them for the first two days. I’m learning a lot about living in the country, thanks to Google.

Tomorrow, I’m going to do the craziest thing—well, at least the craziest thing I’ve ever done besides leaving Pennsylvania to move to Wyoming where I know absolutely no one. I’m going to buy some chickens! Me, the tattooed, pink-haired chick from Philly is going to get, well, some chicks (lol). Two of the guys who helped me clear out the house came by yesterday and fixed up the coop in the backyard for me and put up some new fencing around it. The other night, I spent three hours researching chickens, from which ones to get and what to feed them, to how to collect their eggs and know when there’s something wrong with them (just in case). There’s a local vet who deals with farm animals, so at least there’s someone nearby who I can consult with. I was surprised to learn you don’t need a rooster for the hens to lay eggs. You only need one if you want baby chicks. I’ll do without the rooster for now.

I must be crazy (well, the last paragraph probably confirmed that), but I’m actually thinking about keeping the ranch. At first, I was seriously thinking of fixing it up to sell, but the longer I stay here, the more I like living out in the middle of nowhere. Weird, huh? There’s really no reason for me to go back to Philly other than it’s familiar. People move all the time and start over in new places, so why can’t I? The only thing is I’ll need to figure out what to do with all this land I now have (1200 freaking acres!). It used to be a cattle ranch, but I sold the last few cows, steers, and horses to my new neighbor, since I have no idea how to take care of them or what to do with them. He’d already been taking care of them, so it just made sense to let him buy them.

I want to raise some animals or plant something I can sell, but this is all so new to me, and I have no clue how to be a rancher. If you have any ideas on what I could use the land for, I’m all ears.

Oh, I forgot to mention. I have a new friend. He’s a white-tailed prairie dog that comes and hangs out on my back porch. After the third day of him showing up, I named him Fred. I had to take a picture of him with my phone to find out what in the world he was because, needless to say, we didn’t have prairie dogs back East. The guy who owns the feed store, whose name is Ducky—if you can believe that—gave me a quick education on them. Thankfully, they’re herbivores. I bought some seeds that Ducky said I could leave out for Fred. I can also give him some vegetables. From what I’m told, he probably has a family somewhere nearby, so I’m sure he’s sharing the meals with them. Maybe one of these days I’ll follow him and see where he lives.

Anyway, I’m obviously rambling on about nothing, and I’m sure you have lots to do. If you want to write back, that’s great, but I’ll understand if you don’t. In the meantime, thank you, again, for your service, and I hope you’re back with your loved ones soon.

P.S. - I know it would be easier to exchange email addresses to write back and forth, but if you don’t mind, I kind of like writing letters and mailing them the old-fashioned way. We did that when we adopted a soldier in my fourth-grade class, and it was so exciting when the teacher announced we had a letter from him each month.