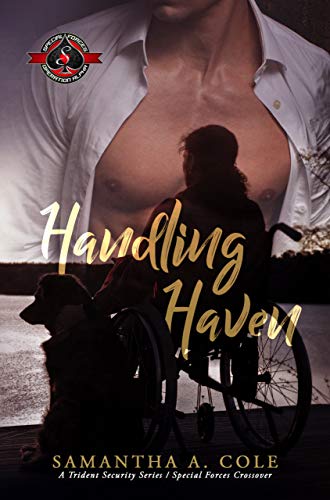 ***This book was previously published in Amazon Kindle Worlds***

Haven Caldwell had the world at her feet. Traveling around the globe, hobnobbing with the elite, she did things other people could only dream of, but it was all a cover. As a covert operative of Deimos, a US black-ops agency that has more secrets than the CIA, she knew how to handle herself in any given situation, even if it required killing someone. But when her latest mission goes awry, leaving her in a wheelchair, she feels she has nothing left to live for.

Delta Force member, Sergeant First Class Lucas “Frisco” Ingram, will never forget the day he met the pretty spy whose life was turned upside down in a split second. Torn and bleeding, she begged him to leave her to die, but he couldn't do it. Now he can't get her out of his head, and she wants nothing to do with him. But when a terrorist threatens an attack on American soil, Haven might be the only one who can help him and his teammates stop it.

While forced to work together, can Lucas convince Haven his feelings for her are not a result of guilt or pity and he has truly fallen for her? Will Haven figure out she has something worth fighting for staring her right in the face? Or will their chance for a happy-ever-after be blown to hell?

In addition to being part of Susan Stoker's Special Forces: Operation Alpha Kindle World, Handling Haven is Book 1 in the Deimos series, which is a spinoff of Samantha A. Cole's popular Trident Security series.