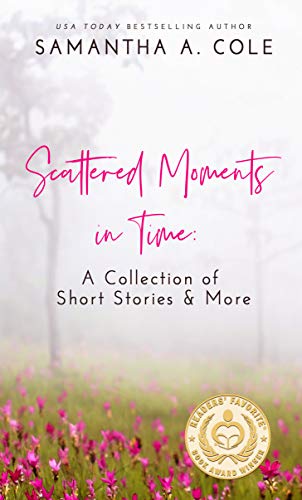 Scattered Moments in Time: A Collection of Short Stories & More

Scattered Moments in Time is a collection of short stories written by Samantha A. Cole. An eclectic mix of themes, some are quirky and cute or deep and inspirational, while a few are dark and mournful. There's a little something for everyone.

Among the short stories, the following are included:

Unconditional: Love Like a Dog - Rescued dog, Jinx, is on a mission to find his human a mate. An adorable story from a canine's point of view. (Previously released in the Be Their Voice Anthology, which is no longer in publication.)

The Hatred Within - What happens when the President of the United States orders all police departments to be disbanded and martial law to replace them? The members of NYPD don't want to find out.

Stoke the Flames - When Cade realizes Jenna is the woman his heart has been searching for, he knows he'll have to work to convince her. Stoking the flames between them shouldn't be too hard, though—after all, he is a fireman. (Previously released in the Down & Dirty Anthology, which is no longer in publication.)

Stud Muffin - The last person Rafe expected to see as a guest at his cousin's wedding was the woman of his dreams. He'd worked with Suki months earlier on a serial murder case, and he hasn't been able to get her out of his mind since. Was fate giving him a second opportunity to get to know her? There's only one way to find out.