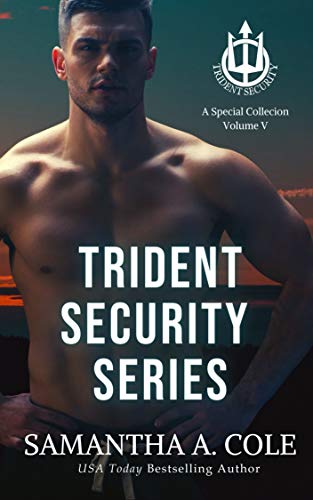 While security operative Jason "Tuff" Tanner lives for dangerous assignments, he likes his downtime in his quiet neighborhood too. But that peacefulness is suddenly interrupted when his new next-door neighbor becomes a target for someone with nefarious intentions. Canine rescuer Concetta "Chet" Suarez brings all his protective instincts to the surface, along with feelings he's never experienced with any other woman. Will he lose her before he ever gets a chance to make her his?

The Trident Security Field Manual: Standard Operating Procedures for FNGs (f*cking new guys—and anyone else who wants to read it) is a fun compilation of extras for fans of the TS series and its spinoffs. Fans will get Character Profiles from the original TS series and the Doms of The Covenant series, a Q&A session with characters from the TS series, the TS Omega Team series, and the Doms of The Convenant series, and Exclusive Short Stories--four of which had been previously published, but are no longer available, on Samantha A. Cole's website, plus a short story featuring fan-favorites Jenn Mullins and Doug Henderson! To wrap things up, family trees for the Sexy Six-Pack are included!

Princess Tahira had grown up not worrying about being pushed into an arranged marriage, but after her mother's near-death illness, King Rajeemh orders his only daughter to choose a husband within forty days or have one chosen for her. While the deadline looms, Tahira and her cousin are kidnapped during a trip to Jamaica.

Trident Security operative, Darius Knight, has been working undercover for several months, infiltrating a human-trafficking cartel. Just when he's almost in the position to take them down, a huge wrench is thrown into the mission. If he saves the woman whose body he's guarded in the past, his cover will be blown. But if he doesn't, he'll never be able to live with the results.

When the rescue doesn't go as planned, Darius makes a rash decision that will affect both their lives. To keep their secret means he'll probably lose his dream job. To reveal it will destroy the woman who is inching her way into his heart.

Torn in Half: Trident Security Book

Retired Navy SEAL and current private-security operative Ian Sawyer had never expected to have a child, much less a wife, but his beautiful Angie has changed all that. Her due date is only days away, and his anticipation outweighs his anxiety, thinking about holding his firstborn.

But as he's learned the hard way, life throws curveballs at the worst possible moment. A frantic phone call in the middle of the night is the beginning of Ian's nightmare. He has to wake his brothers and teammates, leave his wife's side, and fly halfway around the world to save the only other woman who could bring him to his knees—his mother.
.
.
.
***Trigger warning for Forty Days & One Knight - Elements of rape but with a fade to black effect eliminating the graphic details.