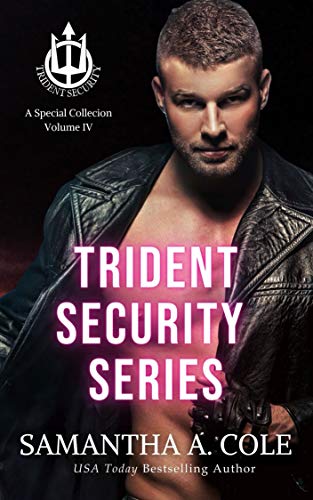 Between new clients and governmental contracts, Trident Security has grown by leaps and bounds. To accommodate the increased caseload, they've added a second team to their Tampa headquarters. After hiring seven "best of the best" from military and law enforcement backgrounds, they've put together a crackerjack group of six men and one woman. But before they're turned out to handle their own missions, they must first prove they are a cohesive and capable unit.

Dropped into the Rocky Mountains, the Omega team has minimal supplies and only two days to make it back to civilization, but what they find in the wilderness turns the training op into a real one. Will they all make it back alive?

Marine First Sergeant Logan "Cowboy" Reese was rescued hours before he would've met the same fate as his five murdered teammates in Afghanistan. Returning to the US and civilian life hadn't been part of his plans at this stage of his career, but dealing with PTSD forced his hand. However, an unexpected job offer with Trident Security, a private firm in Tampa, has him finding a purpose in life again, but will his flashbacks destroy a promising future altogether?

Think you know everything about the Sexy Six-Pack? Think again. This is the story fans will never see coming. Jaws will drop and hearts will pound because nothing is as it seems.

Jase Atwood is a man with a forgotten past and an unsure future. Living on the island of Caicos, he spends his time sitting in a bar drinking, scuba diving for sunken treasure, and working as a mercenary of sorts.

Brie Hanson has lived on Caicos since she was ten. After her father's death, she took over Daddy-O's, his bar/restaurant popular with tourists and locals alike. Her three-month relationship with Jase has been just for sex—no dates, no getting involved in each other's lives, and no letting their emotions rise to the surface.

However, when her sister, Nadine, disappears, Brie's lover steps in to help find the missing woman. Unbeknownst to either of them, Jase's past and present are about to collide. Will it destroy their future, or will it save more than just Nadine's life?

Entertaining Distraction: Doms of The Covenant #2

The last woman Mike Donovan ever expected to be attracted to is one who wants to dominate him.

Having her childhood ripped away in the blink of an eye, Charlotte has kept the different facets of her adult life separate from the others. A parole officer, a homebody, and a Domme are the three personae the rest of the world might see, but rarely at the same time. However, her attraction to Mike merges them in a way she never thought possible.

Can each learn to compromise in order to make a relationship between them work?