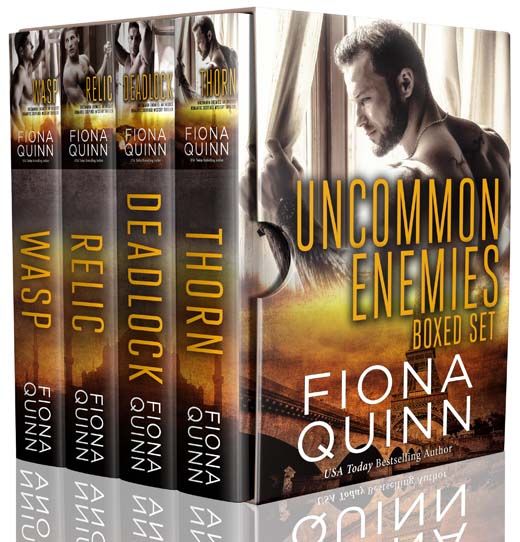 Zoe knows the secrets, now they're coming for her.

The enemy will stop at nothing to get to Zoe and the military secrets that could change everything. What Zoe knows is getting people killed. Is she next?

˃˃˃ Gage is a hardened special forces operative with only one soft spot: Zoe.

Her desperate screams echoing from inside her home switch his instincts from lover to guardian. To keep America safe, to protect the love of his life, Gage is coming full throttle.

˃˃˃ Fiona Quinn will take you on a thrill ride.

Weaving an intricate plot that puts Zoe’s scientific mind and Gage’s battle-hardened skills to the test. With the safety of the US at stake.

Digging For The Truth Can Be Deadly

He’s working for a security group that only hires the best of the best. His job is fueled by danger and adrenaline, and he loves every minute of it. At least he did up until this minute. When Sophia walks into their briefing room, Brian’s heart stops. Sophia is the woman who spun his world and stole his heart then disappeared from his life.

Sophia is fighting to safeguard Syrian relics from being stolen and sold into private collections by terrorists. Her colleagues are being kidnapped and killed. But the FBI doesn’t believe all is as it seems with Sophia. The Bureau thinks she's helping to sell conflict relics, funding terror, and putting America and her allies at risk.

˃˃˃ This Case Will Test Brian’s Conviction, Honor, and Courage

He’ll Risk It All To Keep Her Safe

Honey Honig is good at his job, infiltrating the most dangerous places on Earth and pulling the hostages away from their kidnappers. When the bad guys slips through Honey’s fingers, he hunts a lead to Tanzania.

˃˃˃ Honey Finds His Way Onto A Safari With Dr. Meg Finley, And Into Her Bed

For him, this isn’t just a passing romance, though. Meg sparks something deep and binding in Honey’s heart.

˃˃˃ Out In The Bush, Terrorists Have Plotted Against Them

Honey and Meg find themselves swept up in a deadly game of politics and international crime. From the inside, can Honey and Meg save themselves? The others? It's one thing to be part of a rescue team, it's a whole other deal, to be on the wrong side of the metal bars. Whatever else happens, Honey swears he’ll find a way to protect Meg, and get her home safe. Or he’ll die trying.

Thorn has met his match

>>> Thorn’s mission? Get him safely home.

DuBois’s daughter has just been kidnapped, and he’s in immediate danger.

In an international game of cat and mouse, Thorn and his teammates are put to the test, both mentally and physically, as they unravel the mystery of why Juliette DuBois was snatched from the streets of France.

Ready for a thrill ride? Scroll up and grab your copy!