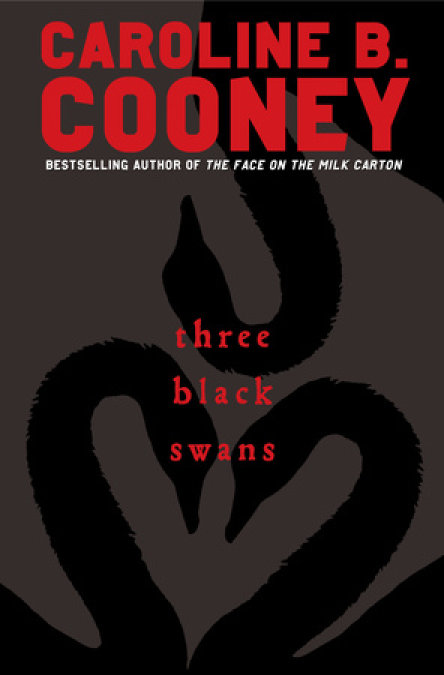 Missy and her cousin Claire are best friends who finish each other’s sentences and practically read each other’s minds. It’s an eerie connection—so eerie that Missy has questions she wants to put to her parents. But she’s afraid to ask. So when Missy hears an expert discussing newborn babies on the radio, it makes her wonder about her family.

Missy just can’t let go of those nagging questions, and decides to use a school project about scientific hoaxes to try to uncover the answers. She enlists Claire to help. As part of the project the girls perform a dramatic scene that is captured on video at school. After the video is posted on YouTube, Missy and Claire realize that they’ve opened Pandora’s box and much more than they ever imagined has come out. Not only are their identities called into question, but so is the future of everyone involved.

In this riveting, heartrending story by thriller author Caroline B. Cooney, the truth changes the lives of three families—as the bonds of blood must withstand the strains of long-hidden secrets that are at last revealed.

Chapter 1
TUESDAY
October
Missy Vianello and her mother were running errands. Mom was in line at the post office sending a package while Missy walked down the block to the dry cleaner's.   The front door was propped open. Missy entered a large hot space, full of clothing, empty of people. The old-fashioned floor fans rotated slowly on their heavy metal posts. A radio sat on a sorting table. It was small and black with a long cord, and probablyas old as her mother. It was tuned to a talk station. A doctor was chatting excitedly about babies.   Missy did not care for talk shows. Politics and angry raised voices did not attract her. Gentler topics--gardens to visit; diseases to worry about--offered nothing to a sixteen-year-old.   On the counter sat a small bell for customers to ring. Like the swirling fans, it was something from a schoolroom in another century. Missy had the odd sensation that she had fallen out of her own time. She tapped the little bell, which made a pleasingmusical ding.   Missy was mildly impatient. Usually the couple who ran the shop were so attentive.   The interview on the radio station continued. At first, the doctor's remarks stayed outside Missy, hanging there like the clean clothes dangling from ceiling racks. And then the meaning of his statements penetrated Missy's mind. If there had not been acounter separating customers from the workspace, Missy would have snatched up the radio and pressed it to her ear.   She who had never given a thought to babies, who wasn't interested in babysitting, who hadn't even met any infants lately--she was stunned by what the doctor was saying.   The fact that had kept Missy safe, the fact that had allowed Missy to laugh at her crazy guesses for the last few years--was that fact a lie?   This doctor is an expert, she thought. He knows what he's talking about. Or does he? Can I trust him?   A clerk she did not recognize hurried over, smiling, saying how are you, good to see you, but Missy, transfixed by the talk station, did not answer. The clerk took the small white ticket from Missy's hand and went to find the clothes.   The interview ended. A new voice discussed weather. Missy found herself holding a stack of neatly folded, plastic-wrapped sweaters. She handed over the cash and even managed to say thank you. She left the dry cleaner's. On the sidewalk, she could no longerhear the radio, but the words had come outside with her.   Missy Vianello had not fallen out of her own time.   She had fallen out of her life.

WEDNESDAY
The following day
Missy had not slept well. Every time she lay down, some internal engine propelled her back off the bed. Half the night, she stood in the dark, while the facts of her life sorted themselves like a pack of cards being dealt. In school, though, she was surprisinglyalert. The lines from the radio vibrated in her head, and yet she was able to participate in class and do her work. She felt weirdly multiplied by the new information.   By the time it was third period and biology class had begun, Missy's energy was fading. Mrs. Stancil discussed fake science, describing a hoax in which the perpetrators aged bits of human skull and jawbone, buried the bone fragments and then arranged forthem to be dug up. They convinced museums and anthropologists that these were the remains of an ancient humanoid. They called the "fossils" Piltdown Man and the world was enthralled by what seemed to be its new ancestor.   Maybe what Missy had heard on the radio was also pretend science. Maybe her new "fact" was as silly as Piltdown Man.   Mrs. Stancil adored classroom discussion. She was delighted when Graham argued with her. "I love archaeology," he said. "I read about it all the time, and that hoax wouldn't work, Mrs. Stancil. You'd test the bones for fluorine, uranium and nitrogen. You'dknow immediately how old those bones were."   "Now you would. But this was 1912," explained Mrs. Stancil. "Those testing techniques were unknown."   The class had only six weeks' experience with Mrs. Stancil, but they knew already that she preferred projects that were "outside the box," and quickly tired of projects that were "in the box."   In Missy Vianello's mind, a hoax blossomed. She could see the entire hoax from start to finish. It would be cruel. But it would work. She said softly, "What hoax would you do, Mrs. Stancil, if you could pull one off? A science teacher would be so goodat hoaxes. A scientist like you could offer a string of lies, but package them so believably that the public would accept your story as fact."   The kids were on board immediately. "Let's do a class hoax," said Anthony. "We could pretend that a lamb bone from somebody's dinner roast is the shin of a pterodactyl."   "And get very scientific about it," agreed Kelsey. "Buttress our claim with bone details, like porosity, and present the measurements of real pterodactyls, or pretend to, and establish that we have a match."   "I think the hoax should be more trendy," said Carlotta. "How about a fake alternative fuel for cars? We could print pages of chemical testing we haven't done, and convince people we can make fuel from, say, pond scum."   Mrs. Stancil was excited. "People! This is truly outside the box. If we format our project so that our research provides us with a deep understanding of the truth, it will be a fun approach. I like Carlotta's idea. Corn is being used for ethanol, so it'snot outrageous that we too could create a vegetable fuel."   "That's not my kind of hoax," said Zach. "I'd rather have a murder victim and convince people it was suicide and get away with murder."   If Missy shouted her own idea out loud, the class would be impressed. But a hoax worked only when nobody suspected. Nobody, thought Missy, already feeling guilty; already aware that her hoax might destroy instead of reveal.   "I wouldn't actually have a corpse," explained Zach. "I'd just pretend to. I've seen at least a thousand TV shows with this plot, so I've pre-researched and I'm ready to go."   "Let's do hoaxes in groups," said Emily. "People who like bones can be in the bone group, people who like murder can be in the corpse group and people who like fuel can be in the pond scum group."   In science, what mattered was truth.   But in life? wondered Missy. What mattered most in life?