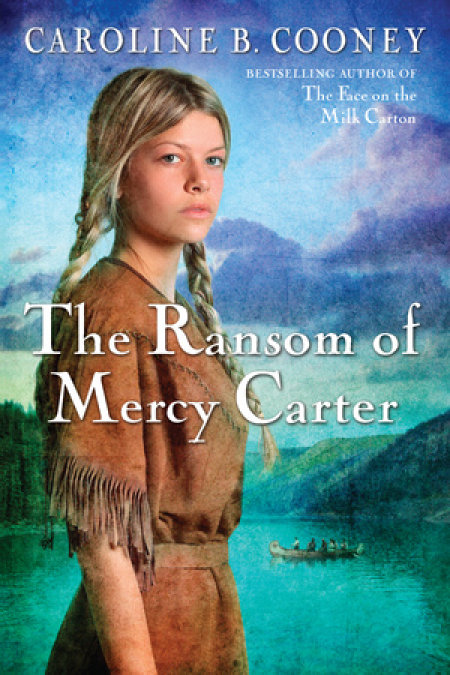 Deerfield, Massachusetts is one of the most remote, and therefore dangerous, settlements in the English colonies. In 1704 an Indian tribe attacks the town, and Mercy Carter becomes separated from the rest of her family, some of whom do not survive. Mercy and hundreds of other settlers are herded together and ordered by the Indians to start walking. The grueling journey -- three hundred miles north to a Kahnawake Indian village in Canada -- takes more than 40 days. At first Mercy's only hope is that the English government in Boston will send ransom for her and the other white settlers. But days turn into months and Mercy, who has become a Kahnawake daughter, thinks less and less of ransom, of Deerfield, and even of her "English" family. She slowly discovers that the "savages" have traditions and family life that soon become her own, and Mercy begins to wonder: If ransom comes, will she take it?

Dear Lord, prayed Mercy Carter, do not let us be murdered in our beds tonight.

Mercy tucked her brothers in, packing them close. Or any night, she told the Lord, shifting her weight from foot to foot. Even though she wore both pairs of stockings to bed, the cold of the floor came through the heavy wool. It was the coldest night she could remember during a winter when every night had been colder than it ought to be.  Downstairs, where the fire was blazing, one of the soldiers had tried to write a letter to Boston and his ink had frozen.

She kissed each brother good night. The boys were wearing most of their clothes, which made them fat and funny under the quilts. She dreaded getting into her own bed, because she slept alone, and only body heat could keep anyone warm tonight.

Before she shuttered and barred the window, Mercy knelt to look out. In spite of twenty soldiers quartered in the village and every Deerfield man armed and at the ready, Mercy could never fall asleep until she herself checked the horizon.

Just below the window was the vegetable garden, covered now in three feet of snow. Against the barn, which sheltered one cow, two sheep and a pig, were drifts taller than Mercy, crusted over from freezing rain. Out beyond the stockade, icy fields gleamed like lakes in the starlight.

None of the children had been allowed out of the stockade since October. This winter a hen in the yard was not safe from an arrow, or a child from a bullet. Surrounded by thousands of square miles of wilderness--and they were 4 trapped in ten crowded acres.

Aunt Mary and Uncle Nathaniel and their two children, too afraid of Indian attack to stay on their farm, had been sleeping on the floor downstairs since the governor had first warned of possible attacks.

It was amazing that the three hundred citizens of Deerfield were not killing each other instead of waiting for the Indians to do it.

Lord, she wished her father were home. He had ridden down to Springfield to buy molasses and tobacco. Without Father, the house felt weak and open, even with soldiers sleeping downstairs. Even with Uncle Nathaniel.

Indians sneak up, Mercy reminded herself. Nobody can sneak across such crusty ice. We'd hear their feet crunching a mile away. Father said so.

Except that when the Indians had come last October, there'd been no sound. Mercy had been the only witness, leaning out this very window.

October in Massachusetts was crimson berries and orange pumpkins, tawny grass and bright red sumac. The colors called to Mercy like bugles; like battle cries. She had unpinned her hair to let the wind catch it and pretended to be the figurehead of a ship, although she had never seen the sea, or even a lake.

"I will lift up mine eyes unto the hills!" she told the horizon. She loved this psalm. "From whence cometh my help."

Swinging so far out the window that her fingertips barely held her safe, Mercy had spotted Zeb and John heading toward Frary's Bridge to bring in the cows. The tall grass around their thighs made them swim in dusty gold. Mercy's hair was the same color, like wheat in the sun, and she was admiring her own thick yellow hair when out of the grass appeared Indians, as natural as wildflowers. Before Mercy could choke back her psalm, they had encircled Zeb and John.

One shot was fired, one dash stopped, two surrenders made.

Zeb and John and the Indians vanished over a rise and out of Deerfield forever.

The boys had known better than to fight. Fighting meant a tomahawk to the head. Surrender meant a chance to live.

And Mercy had known better than to sound the alarm. Taking the boys was bait. The English would do anything to save one another. All the Indians needed to do was capture one white and the rest of the English would come running to the rescue.

Ambush was the Indian form of battle. They did not like casualties. It was not their plan that they should die; only whites. So if Mercy were to scream, the sentries would mount up and the whole village rush in pursuit. But the English would find their horses shot from beneath them, and where only Zeb and John had been lost, now twenty might die.

So Mercy had stayed silent.

The grass closed in, the captives were gone, and the world went on, full of color and glory.

I will lift up mine eyes unto the hills, from whence cometh my help? Mercy thought. Maybe in Israel, in the days of King David, the Lord sent help from the hills. But Massachusetts? Help does not come from our hills, Lord. Only Indians.

Mercy had shaken her fist at the Lord. How could you let those savages take Zeb and John? Why aren't You on our side? You sent us here! Take care of us!

Five months ago, and Mercy still trembled when she remembered her rage at the Lord God. It was the kind of thing that turned the Lord against Deerfield. Every sermon Mr. Williams had given this winter dealt with sin. The Lord had no choice, said Mr. Williams. Deerfield must suffer. Mercy had done her part to anger the Lord and she knew it.

Mercy pulled the shutter across the window, fastened it with the wooden bar and climbed into her freezing bed to consider her sins.

She had woven five yards of cloth today, but the Lord would not care about that. He would care that she harbored evil thoughts toward all three brides in Deerfield.

She was envious of Sally, who had gotten a perfect husband in Benjamin Burt. Horrified by Eliza, who had married an Indian, even if Andrew was a Praying Indian. Sickened by Abigail, whose choice was a French fur trader twenty years older than she was. How could Abigail marry a Frenchman? The French were the enemy. The English were at war with the French!