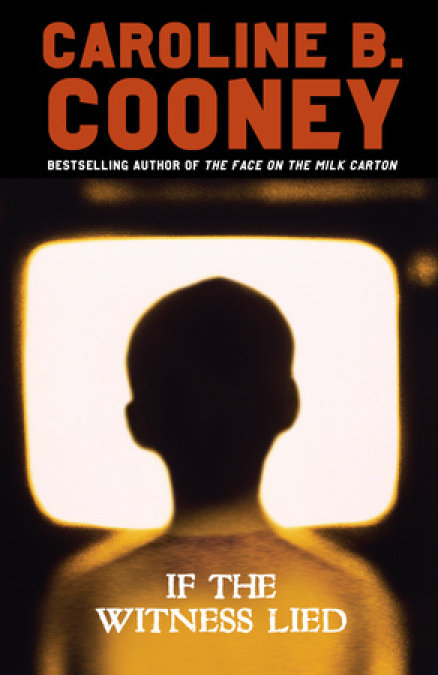 This young adult thriller takes place in twenty-four hours and explores how people as well as the media can exploit a situation with devastating results, especially when innocent children are involved.


Jack Fountain knows that what’s happened to his family sounds like the most horrible soap opera anyone could ever write. But it’s all true. It happened—to his parents; to his sisters, Smithy and Madison. And to his baby brother, Tris. What made it worse was that the media wanted to know every detail.
Now it's almost Tris’s third birthday, and everything’s starting again. Aunt Cheryl, who’s living with the Fountain children, has decided that they will heal only if they work through their pain—on camera. It will be a field day for the media, and no one, except Cheryl, wants that. Jack and his sisters gear up to keep Tris’s adorable face off-screen, but they quickly realize that there is more at stake than their privacy. The very identities they’ve created for themselves are called into question. What really happened the day of their father’s accident?
The Fountain siblings have less than twenty-four hours to change their fate. Together, they will ask questions no one asked at the time of the tragedy. And together, they vow that this time, they will not be exploited.


The good thing about Friday is--it's not Thursday. Jack Fountain lived through Thursday, and nothing bad happened: no cameras, no microphones.
Of course, nothing good happened either. Jack did not hear from either of his sisters.
Their father's birthday--and Jack and Madison and Smithy pretended it wasn't there; that November fifth was just another day.

And in fact, thinks Jack, walking into the high school cafeteria, it was just another day. Dead people don't have birthdays.

Around him, hundreds of kids are buying lunch, skipping lunch or finding lunch partners. His goal is to be normal, although the Fountain family stopped being normal a long time ago. Jack is considering his options when Diana Murray walks past. "We need to talk," she murmurs.

This seems odd. How would Diana know about Dad's _birthday?

But Diana does not pause beside Jack. She keeps walking, moving casually out of the cafeteria and into the hall.

If Diana doesn't want anybody to overhear their conversation, then this is not about a birthday. This is about Jack's baby brother, Tris. Something else has gone wrong; something Jack hasn't planned for. Diana is on the Tris protection team. It's a small group. Usually a two-year-old has parents to protect him, but Tris is not that lucky. He has only his big brother and his babysitter.

Jack returns his brown plastic tray to the clean pile and strolls away, as if merely leaving the hot line for the salad and sandwich line. Then he drifts out of the cafeteria and down the hall, where Diana is leaning over the watercooler.

The last few students with first lunch hurry past. Jack stands behind Diana, pretending to wait his turn for a drink of water. He braces himself for a Tris nightmare. He's trapped in his failure-to-breathe mode: a clenched, solid feeling, as if he's a different species, and will now function without oxygen.

Diana speaks so quietly that Jack has to bend down to hear. He's grown almost six inches this year, making him the tallest sophomore, as well as the best known. Jack is popular. It's partly because he is the one who stays, the one who gives up everything, including varsity, to take care of Tris. But mostly, it's because he's been on television.

Television hung out in his yard, focused on his face and attended the funerals. Of all his classmates, only Diana grasps that television is a force in destroying his family, and even Diana tells Jack how adorable he is in that shot where he lifts up his baby brother and carries him home.

Jack's cheek touches the thick, curly black hair Diana never seems to brush or trim or even know about. Diana's voice barely makes it through her hair. "Tris was playing outside this morning, before your aunt Cheryl took him to day care. When he saw me, he raced over to say hi."

Jack imagines his brother's little legs pumping as he hurries over two front yards to the Murray house. It's a true escape, because Aunt Cheryl usually takes Tris straight from the breakfast table to the car seat.

"Your aunt Cheryl was looking really annoyed, so I hauled him back and put him in his car seat for her."

Why do girls have to give so much data? Jack manages to breathe a little, slow and stealthy, as though he's keeping his lungs a secret. A pinpoint headache sparkles behind his eyes, like a tiny firecracker going off.

"I distracted your aunt Cheryl by asking about her plans for the day. She starts talking in this hysterical voice about closets and clutter. She's going to clean out your bedroom and paint it, Jack. She knows you'll never say yes, so she's doing it before you can stop her."

Laughter bursts out where panic has been building. This isn't about Tris. It's about one of Aunt Cheryl's silly TV shows. She lives for programs where people paint their walls. When she turns on the TV--actually, she never turns it off--she isn't hoping for a good movie with a car chase. She wants to see the lid pried off a paint can. She wants to gaze upon the sewing of window treatments. Her life's dream is to be a guest on such a show. Or any show.

Jack straightens up, grinning and breathing normally. His headache vanishes as fast as a change in the weather. "So who are you, then?" he teases. "Diana Murray, secret agent for remodeling plans?"

Aunt Cheryl will throw anything out, so Jack habitually checks the trash cans. But it has not occurred to him that she might invade his very own closet. He cannot let this happen. His most precious possessions are on the floor of that closet.

The headache comes back so savagely Jack feels as if his brain is being dragged on the pavement, like a broken muffler scraping under a car.

Back when it happened, Jack believed everything would be okay. After all, the ambulance came quickly; the police gathered. These were professionals in his driveway. Jack was reassured. When they agreed to let Jack go along to the hospital, he walked over to his father's Jeep, reached through the open door, and got the sunglasses and cell phone, lying as usual in the little well next to the parking brake.

Dad will need these, Jack thought. He never travels without them.

But it turned out that Dad was traveling to another world, where he would not, in fact, need them. And since he wouldn't need his watch or wallet, either, the hospital turned these over to Jack as well.

Jack cannot bear to touch or even look at them. But neither can he bear to lose them. They're inside Dad's steel-toed work boots, stowed in the back of the closet, where they're safe but he won't have to think about them. (After it happened, not thinking became a family specialty. It's hard to say whether Jack or Smithy or Madison is best at it.)

If Aunt Cheryl has started her project, she could already have taken a carload to the dump. Actually, there is no dump anymore. There's a transfer station, which is worse. At a dump, Jack could poke around and retrieve things. But at the transfer station, belowground, where open metal containers guarded by a sanitation crew are eventually hooked up to trucks and driven away, nobody's going to let Jack jump down inside to hunt for old boots.