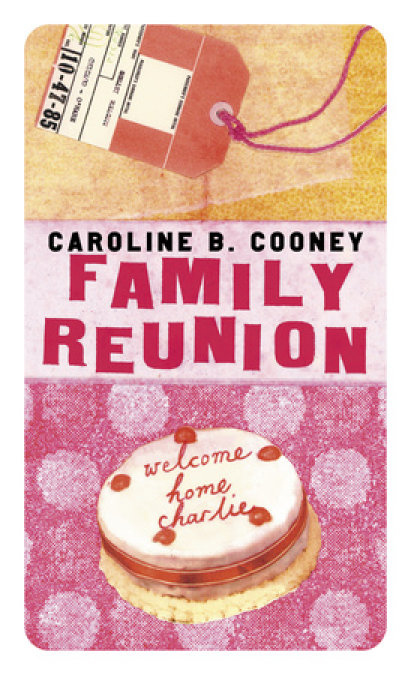 When the invitation to the Preffyn family reunion arrives interrupting a perfectly decent summer vacation, 15-year-old Shelley Wollcott is anything but enthusiastic. It’s not that Shelley has anything against her relatives, she just can’t stand it when they give her that “what a pity” look. It’s not her fault that her real mother walked out on the family or that her father has remarried yet again. With Dad away on business and her older sister visiting their mother in Paris, Shelley must face the “perfect” Preffyns’ reunion with only her prankster younger brother and her insecure new stepmother at her side. It’s an opportunity to uncover the family’s secrets, but Shelley isn’t sure whether, when she discovers the truth, she’ll laugh or cry.

In this funny and poignant novel by Caroline B. Cooney, Shelley learns to appreciate all the members of her unusual family—including herself!—in ways she never anticipated. And she discovers things are often not as perfect as they seem.

It began when we found out that our new summer house had an old bomb shelter in the backyard, and my brother, Angus, decided to sell time-shares in it. Angus is twelve and a terrific salesman. He used to sell my Girl Scout cookies for me, and not once did a customer ask why a boy with a crew cut was in the Girl Scouts. He has red hair and freckles, and I think there is something about red hair and freckles that makes strangers relax their defenses and buy, buy, buy.

Soon after we examined our bomb shelter, Angus divided the year into fifty-two weeks and went off to sell ten shares per week of year-round, lifetime, come-as-you-are survival shelter use.

It was that "come-as-you-are" line that people liked. You could tell it soothed them to know that when the bomb fell, they wouldn't have to dress up to take advantage of their time-share.

"But Angus," I said. "What if the bomb falls in July and somebody bought a lifetime first-week-in-March use?"

Angus drew a long, slow, sad finger across his throat. "Poor planning," he told me. "People have to think ahead. Know their global politics." He turned to his latest potential buyer, an innocent Vermont child with an untouched allowance. "Or better yet," Angus said joyfully, "buy a share in each week of the year! That way you'll never have to worry."

Before Daddy found out and stopped him, Angus had sold seventy-two shares. He had even worked out the division of each shareholder's right to the cans of Campbell's soup still in the bomb shelter. I personally would be worried about chicken noodle soup from 1958.

Daddy went berserk. "We bought this summer house because you were going to enjoy fresh air! Swim in the lake! Fish for trout! Climb every mountain! People said that children need a backyard for a normal, stable upbringing, and so I said, Okay, June through August they'll have a backyard. I'll make these kids stable if it kills me. So what happens? You come up here from New York City, demoralize all these nice Vermont kids, rip off their allowances, and sell them . . ."

He was praying that Angus would admit he hadn't really sold time-shares to a bomb shelter; he had really gotten all that money from a paper route.

"Dad, it's a new idea," said Angus proudly. "A fresh concept. I bet nobody else in Vermont is doing it."

Daddy got a grip on himself and asked what Angus had been charging.

"Ten dollars a share, Dad. It's a bargain. Everybody saw that right off."

My father is a large man, well over six feet, with shoulders like a yardstick. Whenever he has to deal with Angus, he takes very deep breaths, so his chest rises, and his jacket lifts and his shirt buttons reach a state of high tension. I think of him as a rocket about to launch. I worry about the explosion.

"Angus," said my father, "we have hardly arrived in this town. So far I know the guy who installed the extra phone line, the mailman and the waitress at the coffee shop."

Daddy's chest sank back to resting position. He looked up at the ceiling, which in our summer house is quite close to his head. He frequently communes with its cracks. Then he stared at his sweet-faced son and said he had just remembered pressing business back in New York City. He'd be gone for weeks. Possibly all summer. It was up to Angus and me and Annette (our stepmother) to go door-to-door, return all the money and apologize for anybody in our wholesome little family even thinking of selling bomb shares.

Angus had, however, earned seven hundred and twenty dollars. The thought of giving it back was not a happy one. He put on the expression of a puppy at the pound, entreating us to give him love and affection. Earnestly he explained that this sort of thing looked really great on a college application.

Daddy said this kind of thing would make any reasonable college admissions office bar the door.

Angus said he thought he would write Grandma about it, because Grandma was always proud of him, even if nobody else was.

I backed up completely and said I would go check the mail.

Mail is the best thing about having a summer house in Vermont. The big black box pokes up out of tall white daisies and high grass on the other side of a narrow country road, and when the little red flag is down, you know your mail has come.

Vermont is entirely treed. You'd think they had a genuine fear of open spaces and views. Trees curve in over roads and houses and towns, wave upon wave, as if local zoning laws require you to live in a green aquarium. Only the lake, being filled with water, is barren of trees.

I walked through the filtered sun and pulled down the little curved door of the black mailbox. I wasn't actually expecting any mail, because everybody we know uses e-mail or the phone. But there was a letter from Aunt Maggie.

Aunt Maggie is Daddy's older sister. She lives out in the Midwest, where she and her family lead A Perfect Life. We call them the Perfects, because it's rather like their real last name, which is Preffyn. In the old days, when we were sort of perfect ourselves, we used to visit them, but we don't anymore. Daddy says he doesn't have the energy.

Aunt Maggie married Uncle Todd, and she is lovely, and he is handsome, and she is chairman of the school board, and he is a pharmacist. They have a backyard, of course, have always had a backyard, and therefore their children, Brett and Carolyn, are also Perfect. Brett is sixteen and Carolyn is fourteen, and they never were awkward or fat, never had braces, never had pimples, never got anything below a B+. In gym they are always team captains. In photographs, they are always smiling and attractive. That is just the kind of family they are.

When they used to visit us in New York City, we would walk down the sidewalk and point to perfectly innocent people waiting for the bus and whisper, "Careful. Drug deal." Carolyn and Brett always fell for that and told their mother, and Aunt Maggie would say that if we just had a backyard to play in, we would be stable, like her kids.