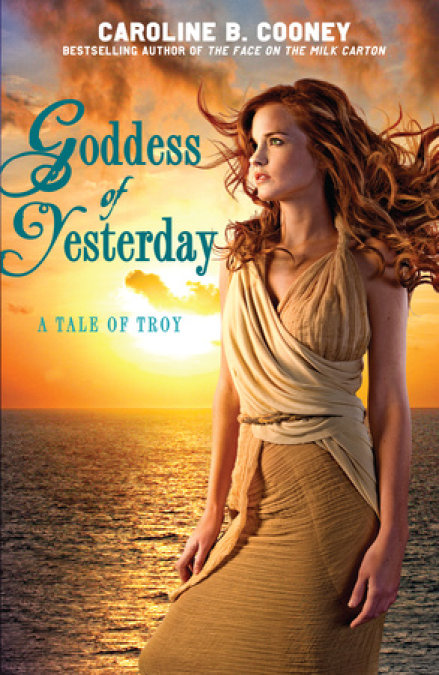 Anaxandra is taken from her birth island at age 6 by King Nicander to be a companion to his crippled daughter, Princess Callisto. Six years later, her new island is sacked by pirates and she is the sole survivor. Alone with only her Medusa figurine, she reinvents herself as Princess Callisto when Menelaus, great king of Sparta, lands with his men. He takes her back to Sparta with him where Helen, his beautiful wife, does not believe that the red-headed child is Princess Callisto. Although fearful of the half-mortal, half-goddess Helen, Anaxandra is able to stay out of harm’s way—until the Trojan princes Paris and Aeneas arrive. Paris and Helen’s fascination with each other soon turns to passion and plunges Sparta and Troy into war. Can Anaxandra find the courage to reinvent herself once again, appease the gods, and save herself?

In Caroline B. Cooney’s epic tale of one girl’s courage and will to survive, Anaxandra learns that home is where you make it and identity goes deeper than just your name.

I was six years old when King Nicander came to the island of my birth, demanding tribute and a hostage.

I did not know what a hostage was, nor tribute.

The king was taller than Father. His oiled beard jutted from his chin like a spear point. His arms were hard and tanned, his eyes twinkling. I liked him right away. "So you are Alexandra," said Nicander.

I corrected a king. "Not Alexandra. Anaxandra."

His eyes crinkled at the corners when he smiled. "Anaxandra, you are coming for a sail with me. You will be companion to my daughter, Callisto."

A sail? I was so excited I hardly bothered to kiss my parents goodbye. My brothers got to go to sea and have adventure, but I always had to stay home with Mother. And I had never met a princess. Callisto means "the fairest," just the right name for a princess, the way Anaxandra was just the right name for me. Mother packed some clothes and my fleeces and put my doll in a box, which I hugged to my chest. I had never owned a box, and Mother kept jewelry in this one. It was heavy, which meant she had left some jewels in it. I would have a guest-gift for the princess.

An officer sat me on his shoulders and off we went. I never looked back at my brothers, standing in a row, silent and envious, and I never waved to my parents.

Our village was perched a thousand feet above the sea. The path to the harbor tilted steeply. I clung to the officer's neck so I wouldn't fall off. "What's your name?" I asked.

He peeled my fingers from his throat so he could breathe. "Lykos."

This means "wolf," which made me think of my puppy. I had named her Seaweed, because when she romped in the water, she came out hung with green fronds. I almost told Lykos we had to go back and get Seaweed, but I remembered that I would be home by bedtime to tell Seaweed all about it.

The sailor carrying my clothes and fleece said to Lykos, "Why didn't the king take sons for hostages? A little girl isn't going to make Chrysaor double his tribute."

Chrysaor was my father's name; it had the word for gold in it. My mother's name was Iris, which means "rainbow."

The king caught up to us. He tugged on my long curls and told me I had hair as red as King Menelaus. I had never heard of King Menelaus.

"A girl as hostage?" said Lykos to the king.

"Chrysaor needs his sons to pirate with him," said the king of Siphnos, "but his daughter he loves. He'll obey me for her sake."

The donkey path was slippery with pebbles and sand. The men struggled for balance and swore at my father for not chiseling steps into the stone.

Steps would make it too easy for pirates. Father knew because he was one. He loved to tell about the towns he had sacked and burned. We had many slave women he had brought back. The men he couldn't keep, because they knew how to use weapons and were too dangerous.

All around the island the sea sparkled. We wound down the bare bones of cliffs to the harbor, where there were so many ships, I could not assign a finger to all of them.

I used up ten fingers counting ships, tucked my elbow into my side to keep the first ten safe, used my fingers over again, and had to tuck in my other elbow. All together there were ten ships, ten ships, and eight more ships, long and slim with black hulls and red sails. Each sail was stitched with a white octopus, its long legs tied in knots.

"You have enough ships to take Troy, don't you?" I said to the king. My father sailed past Troy every year. He admired Troy but hated her more.

"Troy," repeated Nicander, and he and his men looked east, where Troy lies, far far away.

Troy is built on a citadel above a strange rough river that runs uphill into a second sea. Beyond the second sea are endless supplies of slaves and grain, gold and amber. The river is the Hellespont and only with a very strong wind can a ship go up it. If there is no wind, a ship waits in the harbor of Troy. On the return voyage, when the ship's hold is full, Troy takes her share. She is the richest city on earth.

We waded out to the ships. Seaweed and I played here. The stones were flat and good for skipping. "Is Callisto on the ship," I asked the king, "or is she at your house?"

"Callisto is at my house," said the king, "although my house is called a palace. She isn't very well, Anaxandra. She can't run and jump the way you can. You will sit quietly with her and spin."

What kind of adventure would that be?

A man as hairy as a goat leaned over the edge of the king's ship to lift me on board. He laughed at the idea of a girl hostage when there were boys to take, and he tossed me high into the air. My father threw me around all the time and I loved it. But when the goat-haired man caught me, I saw he had expected me to be afraid. "I am never afraid," I said severely. "I can do anything. I can swim underwater and my brothers can't do that. I can even swim into Father's caves."

The king was still waist-deep in the water, his men cupping hands to give him a leg up. "Can you now?" said the king. "And what caves are those, Anaxandra?"

"Where Father keeps the real treasure," I said.

It took Nicander's men all afternoon to get my father's treasure out of the caves and loaded into the ships. How they laughed, congratulating Nicander on his wisdom--taking a silly girl as hostage instead of an intelligent boy: a girl who had just sold out her own father.

The king's ship was hollow inside, the deck planks removed to reveal the hold. In went piles of spears and bee-waisted shields, ingots of bronze and a silver sword pommel, a gold mask and ivory combs.

I sat on a coil of rope. It was damp and salty, the color and texture of an old woman's hair. Waves lapped against the ship like dogs drinking from a puddle. What would Father say to me when I got back tonight?

At last, Lykos bellowed, "Deck the ships!" The slamming of timber was heard on all sides as the cargo was covered by the deck beams. The masts were lifted and placed in their supports and the anchor stones raised.

Nicander flung wine into the sea. "Earth Shaker!" he shouted to the god. "Give us a safe return home!"

The wooden ships groaned and creaked. Bright banners slapped in the wind. There was no need for rowing with the wind so fine and the men relaxed on their benches.

I had not known that when you sailed away from your island, it got smaller. I had not known it would vanish. I kept my eyes fastened to the place where my island had been.

The sun was going down. The sea turned molten gold and the sky purple.

"It's bedtime," I said to the king. "I can't play with Callisto after all. We have to sail back home now."

"You're not going home, Anaxandra," said the king. "Not tonight or any night. Siphnos will be your home."