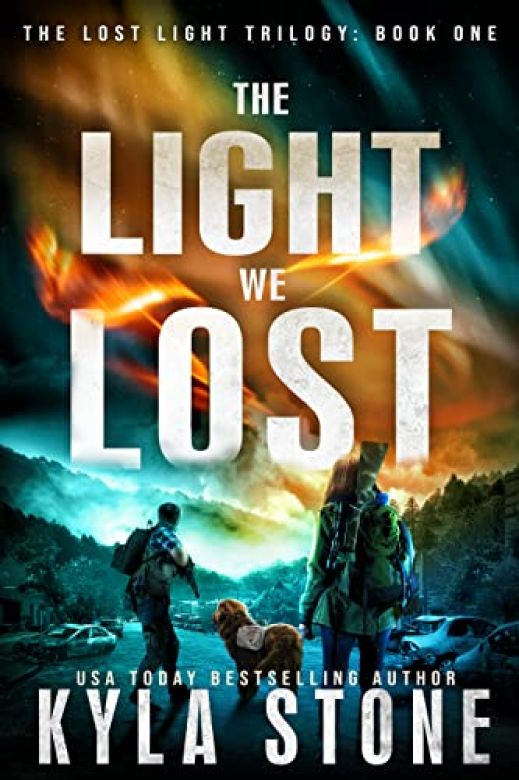 THE LIGHT WE LOST

Shiloh Easton woke with blood on her hands.

Stones dug into her spine. Grass tickled her bare arms. Heat on her face, her cheeks.

Blinking, Shiloh stared up at a hard blue sky. No clouds. The round disc of the sun peeked between her eyelashes, too bright to look at.

At the fringes of her vision, towering jack pines, eastern hemlocks, and cottonwoods stretched for the heavens.

But heaven was too far to reach.

Hell was right here beside her.

Wetness on her fingers. Blood, slick and technicolor red. It splattered her forearms, slippery on her palms, red lines beneath her fingernails.

Somehow, she understood it was not her blood.

The terror was like biting into a live wire. Her stomach churned. She sat up, white spots spinning in front of her eyes.

Don’t look. A primal instinct echoed from the deepest part of herself. Whatever you do, don’t look.

Shiloh forced herself to look. Her legs stretched out in front of her, worn jeans with holes in the knees, sneakers stained with mud. Past her feet lay hardpacked dirt. Glass shards and tiny bits of metal and plastic glinted in the sunlight.

The ground was torn up in the shape of footprints. Here and there, tufts of grass were matted down.         A rusted forklift sat to her right next to a tiered rack of scavenged tires and rims. In front of her stood row after row of junked vehicles, cars and trucks and vans by the dozens.

She couldn’t remember what had happened. Why blood streaked her hands.

Unsteadily, she stood. Dizziness washed over her. Shards of glass stuck to her hair, to her jeans. She bent double, gasping, her hands on her thighs. Fear stuck in her chest like a fishhook.

Shiloh blinked, her mouth moving, silently repeating the only words that could calm her. Montgomery, Alabama. Juneau, Alaska. Phoenix, Arizona.

The places she so desperately yearned to see but never had. A collection in her head, lists of cities, states, and countries: places she would visit someday.

Steeling herself, she straightened. Her bloody fingers curled into fists at her sides, fingernails digging hard into her palms.

Her eyes settled on the lumpy form her brain had refused to register.

With a rush of hollow horror, she took it in. The scuffed work boots. Worn jeans, plaid shirt with the sleeves rolled up to the forearms, the familiar red handkerchief tied around the neck. His head was turned to the side, body splayed like he’d fallen backward. Or had been pushed.

His faded John Deere cap lay a yard away in the grass. Blotches of crimson darkened the olive-green fabric. A crowbar lay beside the hat. It glistened red, tufts of hair and bits of flesh clinging to the iron.

The hard grizzled features had gone slack, silver-gray hair blackened on one side with blood and other things she didn’t want to consider. Bits of bone. Brain matter. The left side of his face was caved in.

He was dead. Her grandfather was dead.

She felt dazed, shaken. Her guts twisted with grief and fear.

What had happened? She didn’t know. She didn’t remember. Her mind was a blank.

The blankness terrified her.

Her memory was like a movie reel fluttering to a jagged stop. There was nothing, just an emptiness. A sensation of falling, of cold fear, like plunging into a frigid lake.

Why couldn’t she remember? She’d fallen through a hole in time. It had happened before. Her mind had gone blank. A chunk of minutes or hours that disappeared, a total blackout.

All this blood. The torn-up ground. Her dead grandfather.

And her brother…where was he?

Cody was supposed to be here. He helped in the salvage yard every day after school, operating the forklift, cutting up metal, organizing scraps, stacking tires.

“Cody!” She screamed his name. Her ragged voice echoed back at her. “Cody!”

There was nothing. The evening sun slanted into her eyes, painting the wrecked vehicles in shades of gold. “Where are you?”

Her heart felt like it was splintering inside her chest. Panic bit at her; she fought it back.

The forest crept in on all sides, deep shadows spilling like oil, hiding its secrets. Her grandfather owned two hundred acres of wilderness abutting Lake Superior, the great northern lake that held its own secrets, its own ghosts.

Shiloh had been born here. She’d lived in this beautiful half-wild place her entire life, every day of the last thirteen years. This was her home.

Cody had been here when it happened. She couldn’t remember, but she knew.

Now, he was gone.

Whoever had come here and done this to her grandfather had also done something to her brother. She felt it. She knew it.

Not dead, though. He couldn’t be dead.

She should call 911. Jackson Cross would come, the undersheriff with the mournful face, who looked at her like he was seeing a ghost.

She knew what would happen. The thing the county had threatened a dozen times. The Michigan Department of Health and Human Services would come, too. The social workers. The prying questions and pitying eyes.

They would abduct her from her life, separate her from her brother, take her to strangers or a group home, which might as well be a cage. She would fade, disappear, lose herself.

This was where she belonged: wandering the woods, fishing the rivers, prowling the cliffs of Lake Superior with the wind in her hair, the sun on her face, dirt between her toes.

One thought embedded in her brain like a splinter: she needed to find her brother.

At fourteen, Cody was brooding and brilliant, a sarcastic and isolated loner. He loved to draw in his notebooks and go night fishing. His hair was a scruffy dirty blond, where hers was black as oil; his eyes blue, where hers glittered like bits of coal.

He teased her relentlessly. She loved him wholeheartedly.

They had no one but each other. Cody needed her now more than ever.

The sun sank low on the horizon, descending behind the trees. The chill in the air raised goosebumps on her bare arms.

How much time did she have before someone came to the house? Hours? A day?

Her grandfather was gone. There was nothing she could do for him now.

There was one place she could go. Somewhere only Cody knew about. Somewhere the authorities would never find her. From there, she could hole up and begin the search for her brother.

Shiloh moved woodenly down the rows of gutted vehicles and exited the gate, not bothering to lock the padlock, then headed up to the house. Her legs felt like lead, but she burned with a resolve that sparked brighter and brighter with every step.

Inside the shadowed house, she moved to the kitchen and washed her hands in the metal sink until they were red and raw. She scrubbed beneath her nails. She could feel the blood seeping into the cracks in her skin, staining her soul.

She yanked her long black hair into a ponytail, then dressed in hiking pants and boots, her favorite Star Wars “Do or Do Not” T-shirt layered over a long-sleeved shirt and a forest green windbreaker.

In her backpack, she packed clothes, a water bottle, purification tablets, a compass, and a topographical map of the area, along with a poncho, tarp, sleeping bag, headlamp, and fire starter from their camping supplies.

She went into Cody’s room and stole his favorite black hoodie. It smelled like him, of paint and charcoal and canvas. Then she packed nuts, SpaghettiOs, Pop Tarts, and Snickers candy bars.

The only thing in her nightstand drawer was a Dangerfield PRAXIS lock-pick set Cody had gotten her. It included a short and medium hook, half diamond, and various rake picks.

Cody alone knew she was a thief. A bit of a kleptomaniac. A collector of secrets.

She shoved it in her pocket and went for the Tenpoint Turbo crossbow that hung on its hook beside her bed. She slung it over her shoulder with the limbs down, tucked under her arm, then grabbed extra bolts and added them to the quiver attached to the stock.

Her grandfather had bought her the crossbow for her eleventh birthday. A fresh pang of sorrow struck her. Grief and fear ebbed and swelled, threatening to overwhelm her.

She rubbed the back of her arm across her face and moved onto the next task, the next thing. If Cody was out there, she would find him.

Before she left the house, she stuffed her grandfather’s cell phone in her pocket. She had no friends or family to call. No father who knew of her existence. No doting grandmothers or card-playing, cigar-smoking uncles.

She had a nebulous idea of an aunt out there somewhere, her mother’s sister. A stranger she didn’t remember.

Shiloh was entirely on her own.

As she passed the kitchen headed for the back door, she grabbed the emergency wind-up radio on the scarred kitchen table. Darkness pressed against the windows, heavy with foreboding.

Shiloh wasn’t afraid of the dark.

Something snagged her eye. Her grandfather read the Marquette Mining Journal. She paused, one hand on the crossbow strap, the other gripping the radio, and stared.

Her teacher had discussed the solar storms in science class. At the time, it had fascinated her.

It was the second headline that stopped her in her tracks: “Convicted Broken Heart Killer Eli Pope to be Released on Technicality.”

The newspaper was today’s edition, dated May seventeenth.

Her heart thumped harder, a stuttering drum against her ribs. Cold washed over her, icing her veins. She knew who he was, what that man had taken from her.

This was not the first time she’d awoken next to a dead body.

With trembling hands, Shiloh seized the keys to the Honda FourTrax Rubicon ATV hanging on a hook by the back door. As she reached for the door handle, the overhead light flickered out. Everything went dark. Silence descended.

Shiloh flicked the kitchen light switch. Nothing. She tried the ceiling fan. Same thing. She blinked to adjust to the shadows and pulled the cell phone out of her pocket. It was on but had no bars. That wasn’t unusual this far north.

Shiloh opened the front door and stepped out onto the porch. Outside, it was night. There were no stars. No moon.

It was the aurora that transfixed her.

Above the tree line to the north, undulating ribbons of fiery blood-red draped the sky. Pulsating, brightening, softening, then growing brighter still. Transparent waves of scarlet, crimson, and burgundy, woven with threads of tangerine and flame.

The world was on fire.

Shiloh left her grandfather’s house for the last time, crossbow in hand, terror and courage ablaze in her heart.

Whoever had taken her brother and murdered her grandfather would pay.

And she would start with her mother’s killer.