"Tanya Anne Crosby has created her own mythology, where history and legend collide.”

Said to be a changeling child left to the King and Queen of Cornwall, Gwendolyn is "blessed" at her cradle by three Fae gifts: a prophecy for her future, a gift of "Reflection," and a golden mane—quite literally, every lock of her hair will turn to gold, only provided it is cut by her one true love.

Yet no one understands more than Gwendolyn that her blessings are actually curses. Any man who gazes upon her will see his own heart reflected in her countenance, and depending upon his virtue, she is the loveliest woman in all the land… or the most hideous. It's a cruel jest of the capricious Fae, for unless a man's heart be true, Gwendolyn is destined to be coveted for her crown, but despised for her face.

To make matters worse, Gwendolyn's ailing father is desperate for an alliance with King Brutus of Loegria. "The Romans are coming!" and according to the Goldenchild Prophecy, only by uniting their dragon banners can they stem the Red Tide. Offered to Brutus's ambitious son, Prince Locrinus, Gwendolyn's heart is tempted by a mysterious, maddening half-blood Fae who she can never wed if she is to fulfill her crib side prophecy. 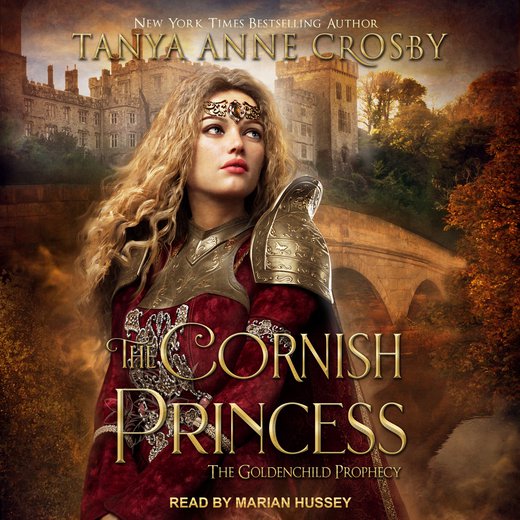 It was Brutus of Troy, a king slayer, who first came upon these lands at the edge of the sea… One day, out hunting, young Brutus sent an arrow through his father’s heart, and for this, he was banished, cast away on an endless sea to seek his fortunes amidst more savage lands.

But little did they know Brutus was favored by gods.

He set sail upon his galley with the serpent prow and arrived at Land’s End with such splendor that he turned the heads of all who knew so little of his kind—those red-cloaked warriors with their golden helms, golden hair and eyes. Indeed, he came, he saw, and he conquered, yet not so boldly as stories might later claim. To be sure, there’s much to be told that transpired hereafter, but this would be fodder for another tale. Enough to say that by the time the sun set on Brutus’ first year on the Tin Isles, he was already High King, while my father, a true son of Dumnonia, was essentially his vassal, bending the knee to a foreigner, whose weapon of consequence was not cold, hard steel, but a sharp mind and tongue. But also, because of a prophecy—the first of two fated to change our destiny evermore.

“As I have come, one day, my people will, too,” warned Brutus. “They’ll rush upon your shores as a red tide to wash your sand with blood. Embrace me, I will defend you.”

And who in Cornwall might have called him a liar? After watching his sturdy ships conquer our storm-ridden bays, my father could do little but welcome a new High King.

Thusly, Brutus of Troy became Brutus of Pretania, and within one swift blink of an immortal’s eye, the Old Ways were swept away, like sands before a raging storm.

And despite that, this land remains an Old Land, steeped in Old Ways.

Our ancestors are no less children of gods.

I am Gwendolyn of Cornwall, princess of the Dumnonii, and this is my tale…

It begins on the seventh eve following my birth, in the room where my cradle lay beneath the light of a pale moon. Here, in the wee hours, I was visited by two ancient creatures, and the only witnesses therein were my mother and her dutiful maid.

“She is beauteous,” said the younger of the two, whose eyes were as icebourne as a Winter sea. She clapped her delicate hands as she peered into my crib, nails long and curved like claws.

“She’ll turn heads,” said the elder with satisfaction, but then she cautioned, “Perhaps she’ll never know her true worth, lest she know the soul of the man who pursues her.”

“Oh! Oh! I know what to do,” exclaimed the younger, with a sparkle of cunning in her brilliant eyes. “I will bestow upon Gwendolyn of Cornwall the gift of reflection.”

Excitedly, she touched a finger to my brow, and whispered sweetly—or as sweet as a ravening voice may be. “Now, all who gaze upon her face will spy their true selves in her countenance, and depending upon their virtue, she will be the loveliest maid in all the land… else, else the most hideous.” She laughed delightedly, tickled by her tricksy gift.

“Esme!” said the elder. “You did not consider this well enough. Now, unless a man’s heart be true, this poor child will be coveted for her worth, only despised for her face.”

The younger fae’s shoulders fell. “Oh, dear,” she said. “Oh, dear. Yes, I see.” Dismayed, she blinked at the moonlit crib, and the silence as she contemplated her folly grew deep.

From the doorway in the same room, neither my mother nor her maid dared reveal themselves, and now my mother worried her soft hands whilst the maid held her by the shoulders, desperate to keep her mestres from the room.

“Fret not,” said the elder fae as they watched. “I know how to fix it. I will bestow upon this child the gift of a golden mane, whereupon every lock of her hair will turn to gold, provided ’tis cut by her one true love. This is how she will know.”

“Indeed, this is how she’ll know,” echoed the younger, and the elder bent to touch a finger to a wisp of yellow hair, and for an instant, the golden locks blazed like the sun.

Only it was then, in that instant, that the elder creature caught my mother’s mortal scent, and she turned to address her timid audience.

“I see you, mestres of Dumnonia!” she said, standing tall—and this was not very tall at all, because, although she was really quite tall for a fae, she was actually quite small.

The beauty of her was astounding, her skin translucent with stardust, and eyes that radiated with the light of two suns.

“We come in peace, only with foreboding,” said the elder. “The doom of our kind was foretold but fell upon deaf ears. Still it came to pass, and now you, too, will face the Twilight, though your daughter is your hope. Heed my words, mestres! You must unite the draig banners to stem the Red Tide!”

“Romans!” hissed the younger, with a tremble in her lips, and this single word filled the room with a bone-deep chill that caused both mortal women to clasp their breasts with both arms.

“Is that my child in the crib?” asked my mother, not comprehending a word of the faerie’s crosstalk, only fearing to the depths of her soul that they’d left her with a changeling child.

“Child of your womb,” crooned the elder.

“Child of the aether,” said the younger, and both vanished like frost from moist breath.

So, there I lay… in my cradle, in a room silvered by moonlight, with a nursemaid and mother now uncertain of my humanity. And yet, no matter their disquiet, both crept to my bedside to peer inside the cradle…

One saw a child disfigured, the other, my face as it is.